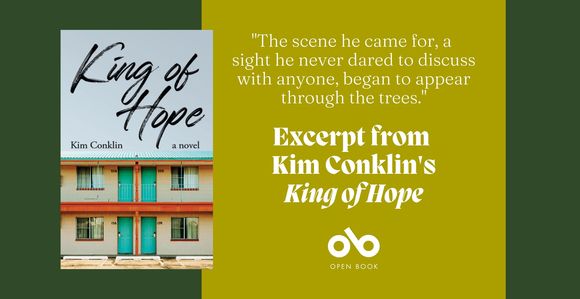 In Kim Conklin's debut novel, King of Hope (Palimpsest Press), Hartley Addison is so beloved in the small town of Port D'Espere that he keeps getting elected mayor – without even running. But what the citizens of Port D'Espere don't know is that Hartley has plans they aren't likely to love. Namely, taking advantage of an influx of media to the town (who are chasing a story about a local poultry plant) to expose Port D'Espere's dark secret: that it has functioned as a major environmental dumpsite for decades.

Regional governments say there's no problem, but Hartley can't abide the environmental destruction any longer. What going public will cost him though, is anyone's guess. As his distant wife drifts further away and the young reporter he's connected with delves into a mysterious side plan, Hartley faces an uncertain future in which the Port D'Espere residents, who have preferred to ignore the looming impact of the waste, will be forced to face the truth about their town.

Bilingual readers will quickly spot the cheeky reference in Conklin's choice of town name: Port D'Espere is inspired in part by Port Hope, Ontario, a picturesque small town with its own environmental issues (related to historic operations of a radium and uranium refinery in the area that left waste and contaminated soil). Conklin's storytelling goes well beyond its real life inspiration though, weaving contemporary environmental concerns with brilliant character building and atmospheric prose to create a fresh take on the Ontario Gothic tradition.

As part of our November spotlight on excerpts, we're sharing a passage from King of Hope today, courtesy of Palimpsest Press.

Excerpt from King of Hope by Kim Conklin: 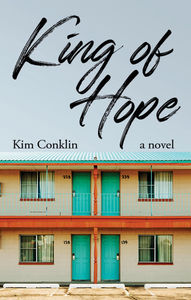 He made a left near Cliffside Beach, slowing down as he approached the harbour. When he came to the end of Hillcrest, he pulled over and stopped at the observation point, where a small picnic area with a couple of tables and a barbeque and swings for the kids sat just a few wooden steps down from the parking lot. During the day, the lookout was a place where people came to enjoy a panorama of the harbour and the lake beyond. People spent hours there on sunny afternoons, drinking in the scenery. The deep greenery of the west shore was dotted with quaint, well-tended Victorian homes and pretty pleasure boats, leading around to the wide mouth of the harbour and the immense expanse of the lake.

To the east of the observation area was an attractive stand of young mountain ash. The trees formed a natural screen, blocking the east view of the harbour from both the picnic area and the parking lot, as most people didn’t like to look at the east side.

It was the view behind the ash trees, however, that had drawn him here. He left the keys in the ignition and headed down the steps and through the picnic area. As he approached the ash grove, the moon disappeared, and he picked his way through the empty beer cans and brown, bare underbrush in the dark until the scene he came for, a sight he never dared to discuss with anyone, began to appear through the trees.

He could see it best at night, especially with the weather conditions this time of year. The world was just settling in for its long, cold sleep, and tonight the collision between the seasonably cool air and the still-warm water produced a dense carpet of fog that wafted up over the shoreline.

The chimera began on the far east edge of the harbour, where a three-story, grey-brown brick-and-glass office building sat on a rocky point, positioned at an angle. Two huge atrium windows sat on the corner, staring unblinkingly out over the lake. That was the head. From there, if you followed the narrow strip of smooth, government-maintained asphalt lined with streetlights as it wound along the heavily wooded bank, you came to a group of storehouses. These buildings gradually spread out and increased in size, giving shape to a serpentine upper body. At the east corner of the harbour, the two identical grey steel wings of the manufacturing facility spanned the road, suggesting the possibility of flight.

The last and bulkiest building on the road, the warehouse, was the swollen belly. Its bay doors opened onto the dock where the trucks and freighters came to fill their empty trailers and holds with freshly painted metal cylinders, the perfectly symmetrical industrial spawn that they would carry around the world and cast on the soil of friendly countries. Finally, the road continued a few hundred yards to a gated fence that ran down to the shore, tapering off in the shape of a small appendage. The compound encircled just over half of the harbour, giving the impression that the reptilian creature was poised to bend back and chew on its own tail.

That was what had drawn him here the past few weeks, ever since he had first seen the monster in a flash—the beginning of a series of bizarre, frightening waking dreams—roaring and belching monstrous flames. As he looked down on it now, the ever-pregnant plant seemed merely restless, lying under the trees, breathing and birthing, exhaling invisible, flesh-braising particles into the air, the earth, and the water.

Fire in the water. Water that burns. In olden times, that would have been seen as a fearsome power, black magic. Now, it was explained away with multi-syllabic technical terms that inspired mostly indifference.

Looking down at the smoking, spewing figment of his imagination, he reminded himself that this was something he didn’t want to admit to anyone, ever. This sight, whatever it was, was a much bigger deal than simply liking an underrated season. Lately he’d been seeing lots of things that weren’t there, things that he knew weren’t real even as he was looking at them, but that appeared and sounded so real, so trustworthy, that he felt he’d stepped into a parallel universe. This picture of the plant as a living creature was still the strongest, but the others were mounting in number. He didn’t even know what to call them, these... scenes: all of the usual words had far too religious an overtone. And he certainly didn’t know what to make of them.

He sat down on a large flat rock at the edge of the ash grove, trying to come to terms with this revelation. Why did it appear to him? Was he the only one who saw it? The plant had been there twice his lifespan, an inveterate part of the community. What, at this late date, could he possibly do about it? He stayed for an hour, maybe more, in a near-trance, waiting for a sign.

This excerpt is taken from the novel King of Hope by Kim Conklin. Published by Palimpsest Press. Copyright © by Kim Conklin, 2022. Reprinted with permission.

Kim Conklin is a writer, filmmaker, and podcaster. Kim’s stories, poems and films have appeared in journals, anthologies, and film festivals. Her journalism has appeared in broadcast and print, and her communications work has received more than 15 awards, including a Clio and a NY International Film Festival award.