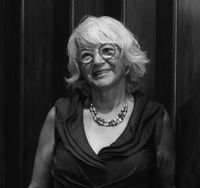 Louise Bernice Halfe - Sky Dancer is an icon of Canadian poetry, so it was a celebratory moment when, earlier this week, she was announced as the ninth Parliamentary Poet Laureate, one of the country's highest honours for a writer.

Her powerful collection, Blue Marrow, is being redesigned and re-released (now in its third edition) this March by Kegedonce Press (available now for pre-order).

Blue Marrow features poems that draw on the voices of grandmothers and mothers, weaving English and the Cree language in raw, moving poems that retain a sense of play and toughness even as they delve, unflinching, into Settler violence committed against Indigenous people in Canada. Celebrating the inherent music and poetry of Cree, Halfe's blend of the two languages has become a key element of her signature style.

Halfe, a residential school survivor and social worker, is an advocate for Indigenous voices. She has previously served as Saskatchewan’s second poet laureate, and been nominated for numerous prizes, including the Governor General's Literary Award.

We're thrilled to celebrate Halfe's appointment with an excerpt from Blue Marrow, courtesy of Kegedonce Press.

Bless me, father. I’ve pierced my flesh. Danced
with the Sun. Bathed my face in blood.
I didn’t mean to.
Forgive me, father. I ask for absolution.
I promise to say my rosary and serve my time.
I promise to keep my hands to myself and
swallow my tongue. Amen.

We gathered in the darkened room,
bodies pressed leg to leg. Our breath
mint and garlic, sage and sweet grass
woven into my burlap gown.
We held hands, my love and I.
On each side my mother and father sat.
Blankets tea sugar flour gunpowder.
Tobacco ribbon blueberry cloth.
In the dark they came.

I bring to you
these Voices I will not name. Voices
filled with bird calls, snorting buffalo,
kicking bears, mountain goats.
I do not recognize who speaks.
Skin unfolds. Sag after sag.
Words squeezed through her
blistered tongues
lick till my heart stings, my
eyes swell.

Lightning flitted.
Scorched our flesh.
They tore out our tongues.
When we spoke,
my love and I, darkness swelled.
Thunder became our footsteps. This
ceremonial dance of my dead.
We were wedded that night.
The night has no shadow,
her veil always an open mouth.
Listen to the bones.

ohkomipan, I am she who speaks, father, the Eternal
Grandmother.
Forgive me father; for I have sinned. It has been since
1492 since my last confession. I have committed the
following sins.

Ripped my robes. Thrown into sea.
Spirit on their soil.

They tore flesh, breasts became pouches, hung
from their belts. Our bellies spilled.
I hung myself.

Blankets kill us. I am a large scab.

Mass graves. Fingers dig still
through the many bones.

Burned our crops. We live on mice.
We hold a Begging Dance.
Still our bellies echo.

Shot our babies, crushed their skulls against the rocks
The great mother sends more gods
to sprinkle water
on our heads.

The land weeps. I am choking. Choking.
The buffalo are a mountain of bones.
My son is shot for killing their cow.

The Keeper of the Stories – âcimowinis

My canoe is swift.
I become a squaw with blood on my hands.

My son is hung. My father became a skin
slipped through their jail
like a falling star.

Moose milk, my joy.
I am fermented
as the sealers
in their cellar.

The Keeper of the Stories – âcimowinis

I will not lose my Pipe.
This holy war I stitch to my dress.
This Skull Dance.
This Ghost Dance.

Louise Bernice Halfe - Sky Dancer first published her poetry in Writing the Circle: Women of Western Canada. She has since published four poetry collections, with a fifth to be released in 2021.

Blue Marrow was first published in 1998 and was a finalist for the Governor General’s Award for Poetry, Pat Lowther Award, and Saskatchewan Book of the Year Award.

The voices of Blue Marrow sing out from the past and the present. They are the voices of the Grandmothers, both personal and legendary. They share their wisdom, their lives, their dreams. They proclaim the injustice of colonialism, the violence of proselytism, and the horrors of the residential school system with an honesty that cuts to the marrow. Speaking in both English and Cree, these are voices of hopefulness, strength, and survivance. Blue Marrow is a tribute to the indomitable power of Indigenous women of the past and of the present day.

More than twenty years since its first publication, this critically acclaimed collection is available in a redesigned edition,
including an all-new interview with its celebrated author, Louise Bernice Halfe – Sky Dancer.