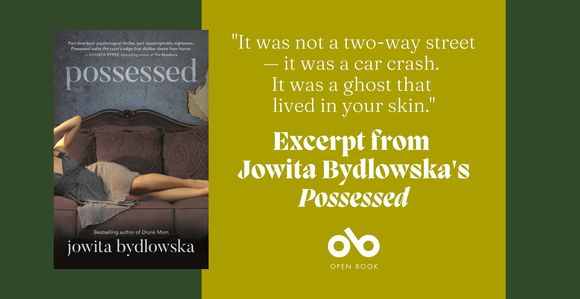 It's impossible to think of anything else, impossible to focus, and all your friends are sick of hearing about it. Anyone who's ever found themselves in the throes of a romantic obsession knows the broken record-quality of the thought process. But for Josephine, the protagonist of Jowita Bydlowska's Possessed (Rare Machines/Dundurn Press), things have progressed beyond the usual lovesick stage. Her unrequited yearning for her indifferent, younger, occasional companion is becoming pathological, a vector to focus all her pent up anxieties about her dead-end cubicle job, her complicated connection to her former partner, and her capricious mother, who is descending into dementia.

Worried that she may be genuinely losing her mind, Josephine makes a dramatic break, fleeing, under the guise of a work assignment, to a former quarantine island isolated in the Adriatic Sea. But when she arrives and mets a strange, beguiling man, it appears that obsession may have followed her. And that the strength of her longing may have taken on a worrisome, even supernatural, life of its own.

Gothic, sensual, and darkly funny at times, Possessed is a powerhouse offering from Bydlowska, a writer unafraid of pushing the envelope. Known for her bestselling memoir Drunk Mom, Bydlowska's newest novel (following her fiction debut Guy) is a fever dream of how the dark side of desire can slither in to create chaos both internal and external. We're excited to share an excerpt here today as part of our November spotlight on excerpts, courtesy of Rare Machines, in which Josephine's wry, unfiltered inner voice throws the humiliating, surreal, obsessive nature of unrequited love into sharp relief.

Excerpt from Possessed by Jowita Bydlowska:

It was relentless, a fever that wouldn’t let up. I couldn’t do anything without him breaking into every thought. I lived in a state of paradox, able to only think about him but also wanting him out of my mind. I wanted him out just so that I could experience the rest of the world.

I read quotes posted online, and they all claimed that the world was out there and that it was wonderful. Why couldn’t I remember what it felt like before him, what gave me joy? Was it nature or art? I had only a vague idea of liking those — trees and rivers and paintings of them. Now they didn’t seem worthy of attention, or interesting. Only he seemed interesting.

I wanted him out, not because I didn’t love him but because I couldn’t think about one thing only; it was maddening. Yet I couldn’t stop it. On a loop, a movie for an audience of one, thousands of short clips of what I had so far: the way he slowly slung his jacket over the chair on our first date, how he asked the waitress if they had any gluten-free drinks and repeated the request, straight-faced, as she stared, confused, and how he walked to his car as if he owned the sidewalk. His hands, lips, teeth, how he held me by my neck — all that came later on in our story. His name was lodged between my ears, and I said it over and over during the day as if it would bring me comfort. It didn’t.

At night, too, I said Sebastian’s name. I dreamt about him.

Every dream, his face above me, present and hot with breath then dissolving into nothingness. And then the in-between time spaces where he was, and then I’d wake up, and he wasn’t.

I talked to him in my head. Shopping: Do you like this crop top? The pants? Silver or gold?

Hair: Should I dye my hair, should I be a lighter brunette, should I shave my entire body? Also, should I lose some weight? (My maybe-boyfriend, Victor, disliked any kind of fat. He was fixated on my small breasts, and he once pinched my thigh and said, Nice, but in the wrong tone of voice. I assumed men generally liked skinny women, at least that’s what the internet suggested, and all the ads, except for the one for cream cheese. I didn’t eat cream cheese. I joked to myself I didn’t want to end up fat and on a cloud.)

I read a quote in a book about a woman obsessed with a man.

The quote was, “When you’re living so intensely in your head there isn’t any difference between what you imagine and what actually takes place. Therefore, you’re both omnipotent and powerless.”

I didn’t feel omnipotent, only powerless. The book was popular with the kind of smart people my age who liked obscure things, dug them up, and then threw them into the mainstream. Etch A Sketch life.

They made a TV show based on that book, too, starring a popular actor of my childhood.

In the story, the man was quickly turned off by the protagonist’s violent pursuit of him, but his disinterest only seemed to fuel her. She wrote him desperate letters and continued to do so even after numerous rejections. In the TV show, the childhood actor was no longer young or wearing leather jackets, but his face remained boyish despite the ratness of it.

The story was supposed to be about something else, not about the obsession but about art theory and a woman coming into her own, all thinky stuff. But I liked it for the obsession since that was the only part I could relate to — I could relate to the desperate letter writing and over-the-top unreciprocated sexual confessionals.

I didn’t do that with Sebastian, but that doesn’t mean I didn’t want to. I wanted to do all those things; I wanted to hide in the bushes across from his apartment. I wished I was more like the protagonist of the book — bold and proud of my craziness.

I was too subtle. I wanted to run into Sebastian, unscripted.

But it was impossible. Even our geography didn’t allow it. He lived in the suburbs.

I streetviewed his address on Google Maps and rode the cursor around his neighbourhood enough times that I memorized all the details: in his driveway, the absence of his mother’s car; on the corner, a young girl in a colourless coat; a few blocks down, a new refrigerator being delivered.

I was familiar with his daily schedule — he left the house to work out of the coffee shop a short drive away. In the evening, he went out to drink. Sometimes he drove to the city to go on dates. I didn’t want to think about that. It wasn’t necessarily that I was jealous of him sharing his body — I just didn’t want him to think that he had the time to meet other women when he told me he had no time to meet with me.

I knew where his favourite bar was in the city, but the place closed down shortly after he started disappearing. I only went by the bar once to see if I would run into him and I didn’t, and I felt mortified that I did that, so I never did it again.

Since there was no chance I could run into him where I lived downtown — in a city that pretended to be New York but wasn’t — I tried to conjure him in other ways, for example, by counting random things: tiles, letters in words, redheads.

Later on, when I admitted to myself about how big of a problem my obsession was becoming, I bought and tried to read popular self-help books about unrequited love, narcissism, and other bad behaviour. During one of my more focused readings, I learned about a condition called limerence. It was not yet classified as a psychological illness in the Diagnostic and Statistical Manual of Mental Disorders (DSM–5), but there were some studies and books written about it. Limerence was characterized by intrusive thinking about the object of one’s affection, and it manifested as a vacillation between intense joy and deep despair — depending on the feelings being reciprocated or not. The pendulum of its design reminded me of bipolar disorder, or at least what I remembered about it from my days as a psychology undergrad.

My romantic obsession was groundless because I didn’t have a lot to go on, just a few dates, some texts. Scraps. It fit perfectly within the definition of obsession: an obsession is a thing that is not based on reason. It is similar to addiction, which is an inability to quit doing something despite wanting to. It is similar to sickness.

Limerence was very much like sickness in that it was debilitating. It could not be explained in terms that would make sense to a person who was logical. I was pining for someone I loved despite not having any evidence that the love was reciprocal. It was not a two-way street — it was a car crash. It was a ghost that lived in your skin. A real ghost would be better — at least you’d have something outside of yourself to scare you.

With limerence, the ghost was trapped, and although you were the only one who could release it, you couldn’t. You didn’t want to because how could you live without your ghost, your love?

It seemed impossible; it seemed like death living without your love, your lovesickness.

Jowita Bydlowska was born in Warsaw, Poland, and moved to Canada as a teenager. She has published two bestselling books: the memoir Drunk Mom and a novel, Guy, as well as dozens of short stories in various magazines and journals. Jowita lives in Toronto.

Josephine is obsessed. Or possessed — by unrequited love for a younger man who doesn’t promise anything, but who gives her a taste of intimacy that puts her on the brink of losing her mind. Oscillating between her elusive lover and her older former partner, stuck in the hell that is working in a cubicle, and obliged to tend to her destructive, senile mother, Josephine is trapped.
After a work assignment promises to deliver distraction, Josephine makes a decision to visit a former quarantine island in the Adriatic Sea, where she meets an enigmatic, beautiful man with a haunting story. Intimate and erotic, Possessed is a dark and funny story exploring sexual obsession, mental illness, and the supernatural.