Governor General's Literary Award winning poet Don Domanski, who passed away in 2020, is remembered for his ability to combine epic themes of environmentalism and metaphysics with his trademark intimate, lyric style. His final, posthumous collection, Fetishes of the Floating World (Brick Books), represents the culmination of that aesthetic: a penetrating, moving, at times mystical exploration of the world and our role in its lifecycle.

We're proud to present an excerpt from Fetishes of the Floating World courtesy of Brick Books today. Here, in the poem "Homeworld", we get a perfect glimpse of Domanski's style and the impact of his literary imagination.

Excerpt from Fetishes of the Floating World by Don Domanski: 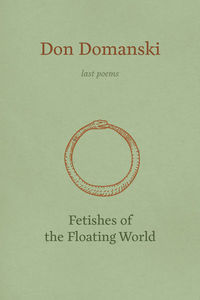 this is where glair and yolk sing to the heavens
where each clade is born to their spiritual dimensions
where God and the absence of God are interchangeable
where the prayer on the lips and the claw in the pulse
send the same message to the stars.

in this world there are beehives and mice     there are
rivers and seas     and a great darkness perched
on each grain of sand at the water’s edge     in this world
all life is connected     right back to the flyblown point
of our origins     here everything moves towards
the apparitional eventually ghosting outside the frame
even us     especially us with our religious endgames
and our backstairs to paradise.

on this globe chickadees sing and glaciers calve
and the spirit flows with blood     through
a wickery of veins and arteries
with imaginings packed in among the body’s organs
with a heart that is kept polished like a red apple
in case the Teacher arrives unexpectedly
in the guise of a drifting cloud or a fly’s wing
or a sprig of angelica from somewhere
in the green world.

on this planet every sigh creates a morphic resonance
somewhere in the dark corners of light
in that shadow rising out of light
the mind’s shadow     its brevity     its silent grace
its faint edges dispersing and gathering in again
unsure of where to settle down for the night.

Excerpt from Fetishes of the Floating World by Don Domanski, published by Brick Books. Copyright 2021, Don Domanski. Reprinted with permission.

Don Domanski (1950–2020) was born and raised in Sydney, on Cape Breton Island, Nova Scotia, Canada. He lived briefly in Toronto, Vancouver and Wolfville, before settling in Halifax, Nova Scotia, where he lived for most of his life. Author of nine collections of poetry, his work is infused with a deep and abiding interest in mythology, religion and esoteric philosophy, and has been translated into Arabic, Chinese, Czech, French, Portuguese and Spanish.

He mentored other poets through the Banff Centre for the Arts Wired Writing Studio and the Writers’ Federation of Nova Scotia Mentorship program. Also a visual artist, his work often appeared on the covers of his books. He collected fossils for many years, before turning his attention to meteorites and Stone Age tools. He is credited with discovering the neural arch of a 350-million-year-old (Lower Carboniferous) amphibian previously thought to have gone extinct in the Devonian period.

His poetry collections Wolf-Ladder (1991) and Stations of the Left Hand (1994) were shortlisted for the Governor General’s Award for Poetry, and in 1999 he received the Canadian Literary Award for Poetry from the Canadian Broadcasting Corporation. All Our Wonder Unavenged (2007) was honoured with the Governor General’s Award, the Lieutenant Governor of Nova Scotia Masterworks Award, and the Atlantic Poetry Prize, and Bite Down Little Whisper (2013) won the J.M. Abraham Poetry Award.

Fetishes of the Floating World

Fetishes of the Floating World continues Don’s lifelong exploration of mystical ecology. It is an invitation to experience the sacred dimensions of what-is and to become more intimate with the strangeness that haunts our lively, changeable world. Here is a spirituality that doesn’t turn its back on the material and immerses us in earthly being.

The sustained apprehension of deep time underlies every moment of this work; every moment is held up against that more-than-human span and is relinquished to it. Domanski’s full-bodied, incantatory language will penetrate your very marrow, calling you out of yourself to testify to the world’s “inclement graces.”