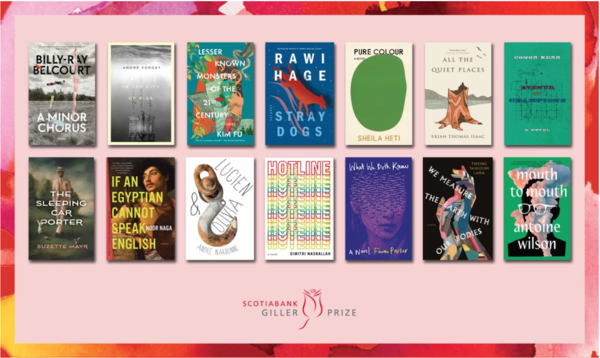 This morning during a Facebook livestream, the Scotiabank Giller Prize announced its 2022 14-book longlist.

Hosted by 2021 winner Omar el Akkad, the ceremony thanked judges Kaie Kellough, Katie Kitamura, Casey Plett (jury chair), Scott Spencer and Waubgeshig Rice, who chose the longlist from nearly 140 submissions and will select the shortlist (to be announced September 27) and the eventual winner (to be announced November 7) as well as prize sponsor Scotiabank, which has supported the award since 2005.

El Akkad added a some humour and warmth to the announcement, touching on his own experience of being a Giller nominee and eventual winner, referring to the "overwhelming experience" and dryly referencing TikTok and Twitter discussions about the prize and the surreal experience of seeing his book and nomination discussed in real time online.

The announcement also highlighted the return of the in-person Between the Pages event series, with a six-city tour across the country featuring all the shortlisted authors.

The nominated publishers are a mix of multinational and independent houses, with five spots for imprints of Penguin Random House Canada and one for Simon & Schuster Canada, and the remaining eight spots split between independent houses Coach House Books (with two nominations), Dundurn Press (which celebrates its 50th anniversary this year), Touchwood Editions, Nightwood Editions, Graywolf Press (which is based in Minnesota), Black Moss Press, and Véhicule Press. Two of the 14 longlisted titles are short story collections, with the rest being novels.

The authors are similarly varied, with a mix of well-known prize darlings like Rawi Hage and Sheila Heti, and debut breakout stars like Tsering Yangzom Lama and Brian Thomas Isaac.