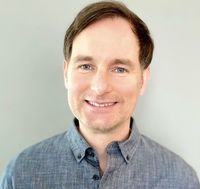 There's something magic about being awake when everyone else is asleep. Sisters Milly and Becca know that to be true when they form The Midnight Club, which meets, of course, at the stroke of midnight and lends its name to Shane Goth's charming celebration of gentle mischief, The Midnight Club (Owlkids, illustrated by Yong Ling Kang).

With big sister Becca leading, the sisters explore their quiet house in the dark of deepest night, filching jelly beans, making shadow monsters, and enlisting club president, Oliver the cat, to help them make the most of their surreptitious adventures.

Milly and Becca hold one rule sacred for the Midnight Club: leave no evidence. But come morning, it seems they may not have been quite as careful as they thought.

Goth's sweet adventure story, brought to irresistibly to life by Kang's playful artwork, is one to be treasured, and young readers will love copying Becca and Milly's special, secret Midnight Club hand signal. We're thrilled to be speaking to Shane today about The Midnight Club, his picture book debut, as part of our Kids Club interview series.

He tells us about his favourite parts of the writing process and what he finds to be the toughest, how rules can paradoxically create freedom in both play and writing, and how he discovered, after publishing the book, that the Midnight Club is much bigger than he thought.

The Midnight Club tells the story of two young sisters who sneak around their house late one night. They’ve created a club where they leap over shadows, play dress-up, and copy the actions of their cat, who’s the club president. All this fun has to happen without the girls being heard by their sleeping parents! After their secret adventure, they need to hide all the evidence of being out of their room and go quietly back to bed.

The idea for the book came from childhood memories of me waking up in the middle of the night. I’d jump over living room shadows on my way to the kitchen in search of treats. The late hour and the thrill of doing something forbidden turned the familiarity of the house into something unknown and exciting. My imagination went wild, creating little challenges to complete and pretending each room was my own secret planet.

I wish I’d had someone to do this with like the girls in the book, but my sister is much older than I am. While she was out late with friends, I was bed-headed in pajamas, hopping around the living room by myself.

I didn’t write the story with a moral or message in mind, but in retrospect, I hope kids recognize the fun and liberation that can come with bringing some structure to their creativity. This might seem contradictory. The Midnight Club has rules – a president, even! This sort of system is normally rigid and restrictive, but not here because it’s the girls who’ve created it. The club gives their nighttime adventure some direction and a purpose. Without its structure, the girls would just be wandering around aimlessly. And so would the story.

One of the club’s rules is that they can do whatever they want. It empowers them to do little rebellions like eating their dad’s jellybeans and sitting in his favourite chair. Beyond the freedom to safely explore and enjoy what’s not allowed, their club also assigns a meaning to things that only they know. A hallway crisscrossed with shadows that they aren’t allowed to step on becomes a challenge, an accomplishment to secretly smile about the next morning. These are the pleasures that come from organized creativity.

In early drafts, the story ended with the two sisters falling asleep on the living room couch, but no one wanted the girls’ club to be discovered by their parents the next morning. So, I changed the story to end with the girls being back in their bedroom. The illustrator, Yong Ling Kang, added a wonderful piece of spot art at the very end where we see the girls have left out some clothes and food in the kitchen – their secret club might not be found out, but they’ll have some quick explaining to do!

Because the story took place at night, I’d wondered if the illustrations would end up dark and gloomy. Instead, Yong Ling used such a colourful palette of purples and blues with some bright yellow, too. The artwork is bursting with detail. And the framing of each spread is so interesting, like the tilted angle of the house on the title page and the top-down view of the girls creeping down the stairs. Yong Ling’s illustrations for The Midnight Club beautifully show just how different a house can look when you’re a kid sneaking around it at nighttime.

Once the manuscript was far enough along that I was comfortable sharing it, I was struck by how many people told me they sneaked around their house at night as kids, too. A childhood memory that I thought was weird and unique to me turned out to be an experience shared by so many. I love how the book made this connection with others. The Midnight Club is bigger than I thought!

To me, a great book for kids or adults should seem like a diary. I’ve never kept a diary, but my sense is that they are meant for feelings and secrets. Writing this way can make the reader – and the author – fully inhabit the experience of the protagonist’s life. What an opportunity for understanding and empathy that books can provide.

I really admire the stripped-down worlds in books like Arnold Lobel’s Frog and Toad series and Kevin Henkes’ Kitten’s First Full Moon. The peaceful quiet of these stories brings emotions to the forefront. I think these books understand how children can filter out the big, busy, noisy world and focus on what matters to them. So often, these are little things that adults overlook, secrets to be explored and enjoyed only by children.

While each stage has its own joys and challenges, my favourite one is revision. I enjoy obsessing about words, punctation – moving a paragraph break and then moving it back gives me great joy. With a kid’s book, there’s the written aspect to consider: does the prose best capture my intended meaning and how will it be understood by a child? Then there’s the spoken aspect: is there a rhythm, will it be fun and melodic to read aloud? It’s a lot to consider. There’s a danger in getting too deep into language too soon in the process, when there’s so much hacking and slicing to be done, but it’s something I look forward to.

The toughest part for me is inspiration. An idea comes and I get excited. This is going to be amazing. I start writing and suddenly I’m thinking: this is sentimental sludge, it’s cliché, I hate it, this book already exists. Many first drafts are abandoned. The emotional highs and lows can become disheartening.

But what can I do? This is all part of the process. It’s like, here’s someone else showing up on my doorstep late at night, their shirt torn and pockets pulled-out. I can’t turn them away. So I brush them off, invite them inside, and say, “Let’s get you cleaned up.”

Shane Goth is an MFA graduate from the University of British Columbia, whose short fiction has been published in several literary journals. The Midnight Club is his first picture book. Shane lives with his family in Vancouver, British Columbia.

A cozy sibling conspiracy unfolds at midnightAt the stroke of midnight, Milly wakes up her big sister, Becca. It’s time for Milly’s first Midnight Club adventure! With Becca leading the way, the siblings explore the hidden wonders of their house in the dark. They dip into Dad’s jar of jelly beans, try on Mom’s coat, and make more mischief with the help of the Midnight Club president (their cat, Oliver!).Exhausted from their midnight expedition, Milly is ready to head to bed, but not before she remembers the club’s most important rule: The Midnight Club must be a secret! The sisters quickly clean up before settling into bed. But they might have left a few clues behind …This charming midnight romp celebrates the special bond between siblings with a mischievous but safe spirit. Playful details like The Midnight Club hand signal and the special club rules are sure to inspire readers to plan their own at-home adventures.