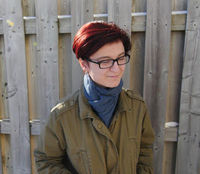 When the acrid smoke of a painful breakup finally clears, what can be salvaged in its wake? It's in this new wasteland of junk food, lies, and other detritus that author Simina Banu's debut full-length collection, POP (Coach House Books) seeks to find an answer.

Examining both past and future, POP employs a variety of poetic styles and perspectives to sift through the clutter of the love poem, taking stock of what still matters and what never did. Through the cathartic noise, a new space is opened and repurposed.

We're thrilled to have Simina at Open Book today to discuss how learning English as a child led to a lifelong obsession with language, being inspired by misread advertisements, and why she can't bring herself to let a single poem do all the work.

I immigrated to Canada when I was five years old, barely knowing any English. This experience led me to perceive language as something opaque and impermeable. It led me to pay extra attention to its uses—I would double check words and phrases and idioms to make sure what I was saying or writing wouldn’t out me as an “other.” This attention to language—in literature, but especially in everyday conversation—is what ultimately led to my interest in poetry and language-play.

The first poem that knocked me out was “the lesson of the moth” by Don Marquis. I was struck by its everyday vernacular and lack of punctuation and capitalization, which to me resembled text on the internet. The stylistics were attributed to the idea that it’d been written by an eloquent cockroach, who could only compose by jumping on the keys of a typewriter. But I remember 14-year-old me being thrilled to discover poetry could be colloquial, whimsical and funny, and still so touching. I was hooked.

Misreadings! I’ll often glance at a billboard or piece of advertising and flip around words or miss a few letters. Once I read a poster saying “are you feeling stressed?” as “are your feelings stressed?” which had a lot of poetic resonance for me and sparked the premise of a piece. I’m always drawn to the sloppy language of television ads, snack aisles, social media—all the dystopian things.

Usually I’ll begin with the intention of writing a single poem, but during the composition process, ideas snowball until I realize they’re not going to all fit into one piece. That’s when I start recalibrating and thinking about a series of poems. It occurred to me that I might just not have the fortitude or attention span to perfect a poem, so I throw my hands up and write some others until together they outline what I was originally going for. Or let’s say it’s compassion. It feels a bit ruthless to make one poem do all the work, so I cut it some slack. I really admire writers who can craft that perfect poem, though.

I try giving it other avenues to express itself! If an idea or feeling isn’t really getting anywhere as a poem, I’ll switch gears and see how it looks as visual art or music. Having done that, when I go back to its poem-form, it feels a bit more open, with new pathways to explore.

Simina Banu is a writer interested in interrogating her own experience with technology, consumerism, pop culture and the poetics of (un)translation. Her poetry has appeared in numerous journals, including filling Station, untethered, In/Words Magazine and the Feathertale Review . In 2015, words(on)pages press published her first chapbook, where art . Her second chapbook, Tomorrow, adagio, was released in 2019 through above/ground press. POP is her first full length collection of poetry. She lives and writes in Montreal.

POP rummages through the stale Cheetos after the love poem: what remains? What never existed to begin with? The book invites the reader to journey both forward and backward in time, to retrace steps, solve word searches, hold pages to the light. POP delineates the intensities of a volatile relationship through a variety of lenses. As the speaker tries to anchor her experience, she is met with a clamour of perspectives: it is a junk food fight of poetic styles, each line fried and seasoned using recipes passed down for generations; it is a sad clown’s skincare routine; it is a singalong, a cartoonish cacophony of pots and puns. The speaker shakes the love poem for all it’s worth, leaving behind a trail of lint, wrappers, fibs, and soap foam, but opening up enough space to move in herself.