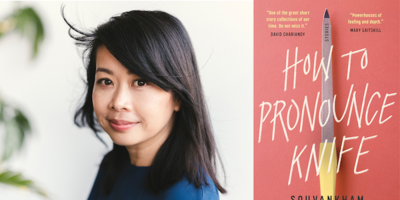 Last night in an online broadcast, Souvankham Thammavongsa was named the winner of the $100,000 2020 Scotiabank Giller Prize for her debut short story collection How To Pronounce Knife (McClelland & Stewart).

Thammavongsa was already a decorated poet, having written four collections and won the ReLit and Trillium Awards, amongst others; however, How To Pronounce Knife was her first foray into publishing book length fiction. Her stories have appeared previously in prestigious literary journals and magazines including Granta, The Paris Review, and The Journey Prize Stories. Born in the Lao refugee camp in Nong Khai, Thailand, she was raised and educated in Toronto, where she is currently working on her first novel.

The jury, composed of Canadian authors Mark Sakamoto (jury chair), Eden Robinson and David Chariandy, Canadian British novelist Tom Rachman and literary critic for The Guardian, Claire Armitstead chose How to Pronounce Knife from 118 submitted works. They praised the collection for portraying "the immigrant experience in achingly beautiful prose" and said that "the emotional expanse chronicled in this collection is truly remarkable."

John Doig, Executive Vice President, Retail Distribution at Scotiabank (who have sponsored the prize every year since 2005) praised both Thammavongsa and the rest of the finalists, saying "in a year like no other, Canadian authors remain at the top of their craft."

For those looking to congratulate the Twitter account @GillerPrize will be hosting a live chat with her on Thursday, November 12 at 2 p.m. EST, using the hashtag #GillerWinner.