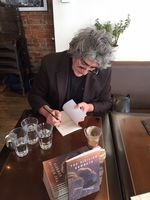 Author Joseph Maviglia's new novel, The Sicilian Cowboys (Quattro Books), follows the story of Bobby DiRienzo, a young construction worker who flees to southern Italy after being involved in an on-site accident due to drug use. While there, he falls under the protection of an older ex-user, and the two embark on a harrowing adventure that will test the limits of each.

A swaggering, visceral journey through the badlands of southern Italy, The Sicilian Cowboys will please lovers of Westerns and Beat-era literature alike.

We're very happy to have Joseph at Open Book today to discuss the years-long process of writing his book, the importance of capturing an authentic voice, and what makes for a truly great narrative.

This new work, The Sicilian Cowboys, is a 'road' novella about a kid, Bobby DiRienzo, who has to leave home and travel to southern Italy (Calabria and Sicily) to get away from being involved in a construction accident that kills a fellow worker due to drug use. He is appointed a guardian, Russie Mather, who is a past drug user himself, and their travels meet with unexpected complications. The book started as a 17-page handwritten draft some years back, then grew from there. Writing it, I wanted to tell the story of a working-class kid - something rarely found in the canons of Canadian/North American Literature. A sort-of working-class Holden Caufield.

Not so much a central question as an interest in 'capturing an experience' and an authenticity of voice. Capturing the era of the mid-seventies and the rock and roll culture, passion, alienation, betrayal, and confusion the kid experiences. And how he has to surmount all that to find a moment of epiphany, becoming less self-concerned and more understanding of the difficulties of others.

Did this project change significantly from when you first started working on it to the final version?   How long did the project take from start to finish?

As mentioned, the work started as a handwritten first draft some 15 years ago as I sat in a cabin in the woods. It started as a two-voice narrative, then to clarify the story line, I chose to create a solely first-person narration. That was the biggest shift. Then, of course, reigning the voice in to allow for a story to develop, because I soon found the character liked to talk.  All in all, I'd say between my songwriting and poetry and performing, the book was written over a period of 15 years in bits with the heaviest work and focus coming in the last year and a half.

Whoa! A good pen. A decent desk. Sunlight is good. Jazz and Baroque music. Nuts and raisins. Great espresso!  A guitar to distract myself when the writing is getting too thick or out of hand. This work in particular ran the gamut from handwritten to typed on a Selectric to an Underwood standard to a Word document. I love the sound of the old-fashion typewriter keys. Rhythm is often everything!

Play music. Shoot basketball hoops. Ride a bike. Pick up a guitar and yodel or sing. Read the classics, from Dante to Steinbeck to Poe to Kerouac to Eliot and throw in some old MAD magazines to keep me from taking it all too seriously.

Voice. Action. Landscape. Human interaction. Cultural insights and perceptions. Entertaining characters. Two of the greatest? Well, how about Don Quixote and Moby Dick for prose and The Inferno for poetry. Novellas? Kafka. Faulkner. Flannery O'Connor. Most of what they wrote without listing specific titles. The skill of narration in all its variations is constant to all of them.

I'm presently working on my Selected works, combining elements of essays, poetry, song lyrics, and fiction I've written over time. I’m also working on a new series of songs to be performed and released in the not-too-distant future.

In the great tradition of spoken word, performance poets and singer-songwriters, Joseph Maviglia is renowned for his energized musical performances, written text and non-fiction essays. Born in Ottawa, he attended the prestigious Banff Centre for the Arts after attending Simon Fraser University. He settled in Toronto where he was part of a group of singer-songwriter and poets in the vanguard of Toronto's musical and literary circles. His signature style blended the power of song and poem with a powerful on stage delivery. Joseph’s career has spanned several decades and included tours across Canada, the United States and Europe. Among the highlights are performances at The WOMAD Festival of World Music, the National Gallery of Canada, New York's Nuyorican Poets' Cafe, and The International School of Brussels. Along the way Joseph has supported many social justice causes with his riveting performances. Some of the organizations at whose benefits he has appeared are PEN CANADA , CARITAS, The Villa Charities Foundation, The Daughters for Life Foundation and The Labourer's International Union. Joseph’s song, 'Father, It's Time' appeared on the Juno Award-winning CD 'The Gathering', and his two successive CDs, 'Memory to Steel' and 'Angel in the Rain', both received critical acclaim. The Canadian Broadcasting Corporation commissioned Joseph to write a tribute poem on the 50th anniversary of the publication of Allen Ginsberg’s ‘Howl’ and he was also commissioned to write a libretto for opera which was singled out for strong reviews. Joseph’s poetry has been published extensively and his books include, 'A God Hangs Upside Down' (Guernica Editions) and 'Freakin' Palomino Blue' (Mosaic Press). His latest work of non-fiction 'Critics Who Know Jack: Urban Myths, Media and Rock and Roll’ (Guernica Editons) delves into critical commentary on the inter-relationships of artistic expression in all mediums on subjects ranging from TV programs, films, song lyrics, social and political trends, both in traditional and social media. Joseph is also a passionate educator. He has held many innovative workshops with students, assisting them with the written word and performance skills. The list of institutions that have engaged Joseph's lively and interactive teaching skills include Upper Canada College, Branksome Hall, Brebeuf College,  The International School of Brussels and The University of Calabria at Rende, Italy.