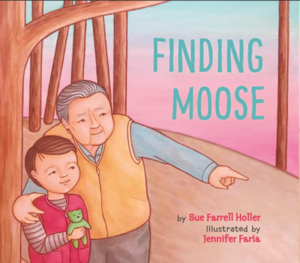 Writer Sue Farrell Holler and illustrator Jennifer Faria knew they had something good going after their acclaimed picture book Raven, Rabbit, Deer, so it makes sense that they've built on their connection with Finding Moose (Pajama Press), another celebration of the natural world that enchants with the alchemy of Holler's gentle, wise storytelling and Faria's rich, serene artwork.

Anchored in the intergenerational relationship between a boy and his grandfather, the book takes readers on a search for the titular moose that reads like a love letter to curiosity.

Today, Holler and Faria, who have co-created two books but never met in person, are speaking not to us but to one another as part of KidLit Convos, our series where co-creators of books chat with each other about what it was like to work together, offering a behind the scenes look at what it's like to collaborate on a book project.

We get to listen as Faria asks Holler about her inspiration for the book (which gives us the chance to hear about Miss Millie, the real life mama moose who was the spark for Finding Moose), her workspace, and her feelings about their collaboration, and as they swap roles and Holler asks Faria about her experience working on the book, including the close-to-home detail she included to make the book extra personal.

What was the strangest or most memorable part of creating this book for you?

The most memorable part of creating this story was the inspiration. I live in a small city in northern Alberta that has an extensive wilderness park that runs along a north-south corridor on either side of the twisty Bear Creek. I spend at least an hour there almost every day, walking mostly, but sometimes just sitting and listening.

One day in late winter as I was walking alone, I felt something watching me. That’s not always a good feeling; it could be a bear or a cougar.

I listened carefully but heard nothing unusual, no breaking branches, no animal noises. I looked near and far, along the creek, in the trees and saw nothing. But the feeling persisted. I was being observed.

Finally, I saw her. Obscured by trees was a heavily pregnant moose, lying down, head up, alert and studying my progress. She was gorgeous and calm and I christened her Miss Millie as I continued on my way. I’d see her from time to time during the next few weeks, but then she disappeared, likely wandering off to have her calf.

Moose are huge and magnificent animals that can be hard to spot even when you know where to look. Finding Moose is a bit an ode to the elusive Miss Millie.

By the way, I think I found her again last weekend, chomping happily on some willow and paying me no mind. The best news? She’s pregnant again.

What was your workspace like while working on your part of the book? What do you need in order to make a work session successful (food, tools, music, rituals)?

This may surprise you: My creative workspace for Finding Moose was on the sofa snuggled beneath a blanket. This is not unusual for me; I hate sitting at a desk.

I’m most prolific in the winter and typically like to write late at night or very early in the morning when everyone else is asleep. I need stillness and quiet in order to feel the emotion of the story and to hear the cadence of the voices in my head.

Walking or cycling liberates a lot of creativity for me and stories often begin with me rushing into the house desperate for paper and pen. Typically, I snag a little scrap of paper, the back of an envelope, a receipt, knitting instructions, a recipe or even the palm of my hand as I try to catch snippets of voice or details of setting before they vanish. The first full draft – whether it’s a novel or a picture book -- is always done with pen or pencil on loose leaf sheets, folded in half. That’s when I find the cozy spot to nest.

For a picture book, it’s usually not until the third or fourth time through that I’ll type the story using a computer so it’s easier to move things around and delete all the parts that felt brilliant on the first go-round. I also pay attention to the doodles and drawings I’ve made in the margins of the hand-written drafts; it’s interesting what they sometimes show.

I’m jealous of artists who have creative food rituals that involve chips, gummie bears, and chocolate. I wish! My only ritualistic food is coffee. I love a big cup of piping hot, strong, “super-duty” coffee, but am limited to one cup and only for those early morning sessions.

Is there anything you want to tell me about your experience working on this?

When I’m writing, it’s like a movie playing in my head. With Finding Moose, as with Raven, Rabbit, Deer, I had very clear settings in my head – very specific animals and plants – so it’s fascinating to see how you interpret my words, how your life, your experience and your art adds another layer and dimension to the stories.

I love that my words speak to you, that you have the skill to transform words on a page into tender images that convey the loving connection between the boy and his grandfather. I’m especially fond of how you use colour.

I think we are the best kind of book parents: our “babies” share our best qualities. I wonder if we’ll have another...

In any event, I can’t wait for the day we meet in person.

How do you view the elements we each contributed as working with each other in the final version?

Honestly, Sue, I’d rather draw the answer to this question; doing the work is way easier for me than talking about it. You’re the word-writer, I’m the picture-painter. I haven’t seen the final product yet, just the preliminary PDF version. From what I’ve seen it looks good. I think we make a good team and our elements complimented each other and combined together well in a warm and playful way.

What are the best, and the toughest, parts of collaborating on books, in your opinion?

In my opinion, the best part of collaborating on books is knowing that there’s someone out there on the same team, rooting for the book to do well. It’s also an interesting and fun challenge to illustrate someone else’s vision. I actually can’t think of a part that’s all that tough.

What are some of the special touches you added to Finding Moose to make the story your own?

As in our previous book Raven, Rabbit, Deer, I based the grandpa character off of my great uncle, and included a green teddy bear, reminiscent of my son’s favourite stuffed animal. In Finding Moose, Green Bear has a bigger part than last time, and is more animated and emotive. I hope the kids enjoy him.

Sue Farrell Holler is the Governor General’s Award-nominated author of the YA novel Cold White Sun as well as the middle-grade novel Lacey and the African Grandmothers and several picture books. Sue grew up on Cape Breton Island, Nova Scotia, where she wrote avidly to more than a hundred pen pals across North America. She later channelled her passion for writing into journalism studies at the University of King’s College in Halifax. Sue has lived in the Northwest Territories and today resides in Grande Prairie, Alberta.

Jennifer Faria is an illustrator, painter, and graphic designer who studied at Central Technical School and George Brown College in Toronto. Her works can be found in the collections of celebrities, politicians, and especially parents, as one of her specialties is portraits of babies and small children. She lives in Burlington, Ontario with her husband and three children. While illustrating the grandfather in Raven, Rabbit, Deer, her first picture book, Jennifer drew inspiration from her maternal great-uncle, of whom she has warm memories. Similar to the boy in the story, Raven, Rabbit, Deer has been a walk of discovery for Jennifer as she learns more about her cultural heritage as a member of the Chippewas of Rama First Nation.

The creators of Raven, Rabbit, Deer are back with another thoughtful tale of a young boy and his grandfather taking a walk through the woods and all the creatures and plants they encounter.

Walking as “quiet as mice and rabbits and deer” they come upon fresh moose droppings and set out to find the moose itself. They discover the branches where the moose ate breakfast, greet a chipmunk and goose, and inspect rosehips and pussy willows, but the moose is nowhere to be found. Finally, after accepting that they will have to try again next time, the boy and his grandfather head home… only to be met with a big surprise.

In Finding Moose, Governor General’s Award-nominated author Sue Farrell Holler gives us a glimpse into the wondrous world of nature through the eyes of a curious child. Grandpa quietly encourages this curiosity while offering answers and further lessons where he can. Illustrator Jennifer Faria draws us in with gentle paintings that make us want to reach out and touch the scenery.