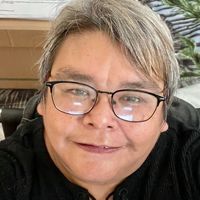 It is impossible to calculate the trauma created by the so-called Sixties Scoop, which saw the large-scale, forcible removal of Indigenous children from their homes, families, and communities, often adopted into settler families or left in foster care.

But we can, at the very least, listen to the stories and perspectives of those who were effected. In Christine Miskonoodinkwe Smith's Theses are the Stories (Kegedonce Press), we hear directly from Smith as a survivor. The essays weave together unflinching portraits of loss with Smith's story of healing, meeting her birth mother, and finding a sense of belonging with the Peguis First Nation in Manitoba.

We're speaking with Christine today about the complex process of writing a book which is, at points, so raw. "When you write from a background of trauma," she tells us, "it can be difficult to recognize when you need a break from writing from your heart."

A deeply courageous book, we're proud to speak to Christine about These are the Stories. She tells us about writing for other survivors and her message for them, why the question of "where is home?" is at the heart of the book, and what is next for her as a writer.

Tell us about your new book and how it came to be. What made you passionate about exploring this?

My new book These are the Stories was something I was working on for at least ten years. It is about the Sixties Scoop and my time in the Child Welfare system. I wrote it not only as a part of healing for myself, but also to let other survivors of the Sixties Scoop know that it is possible to not only tell our stories, but also by telling our stories, they can in the long run also help to educate those who don’t know about this aspect of Canadian history.

It also opens a dialogue to say “this happened to me, but I am no longer going to let what I went through define me”. I am a survivor because I chose to survive, and to other Sixty Scoop survivors—You can survive too.

The central question in my book was “Where is home?” As a Sixties Scoop survivor and the product of a failed adoption, at the age of ten, I was left wondering “what does home really mean?” especially when you are left with no parents, taken away from your only ally—my sister—and then bounced around from home to home. Home is a difficult concept for me to wrap my head around especially because what I thought was home—reconnecting with my birth mom—was severed when she passed away four years ago. For holidays, it’s difficult because I am often couch surfing from place to place, and my heart aches because sometimes I really wish that couch surfing wasn’t a part of holiday plans.

I didn’t set out to specifically have a research process with my book, but I guess you could say I did when I was out visiting my birth mom yearly before she passed. I asked her questions, but careful questions so as not to trigger her. I documented some facts and stories she was able to relay to me. A lot of my notes I tried to keep in my head as much as I could, because I wanted to commit what she told me to memory, so that I could never forget her words or her actions.

What I love about writing nonfiction is that it allows you to bare the truth of what you really went through and allows you to process the truth and learn to deal with it as you go. The strengths in the genre are that it evokes memory and feeling and allows you to unbury the memories you may not really want to remember. This isn’t something I would recommend for everyone who comes from a traumatic background, but it helped me because not only did I have friends and community members who supported me, but they kept telling me “Your stories are important and need to be told.” That encouragement helped me to keep moving forward. It also helped that I had a very supportive therapist that I could turn to if things got too difficult.

In order for me to write, I need scheduled quiet time where I don’t fall victim to spending too much time on social media or get attached to always looking at my phone. Sometimes I buy books that give me writing prompts, which has led to a huge library of books. It helps to kickstart my writing. Or I will just journal and I will see what comes from that. I get teased about having my own library of books, but I consider the library that I have to be great to learn from and it lets me immerse myself into genres I wouldn’t really otherwise get myself interested in. I love learning and I love good pens and books that I can write in—especially a good Moleskin notebook. Those are the best to write in!

If I am feeling discouraged during my writing process, sometimes I will reach out to a close friend or continue to write through whatever I am feeling. Then there are other times where I will close my computer down and just let myself rest. When you write from a background of trauma, it can be difficult to recognize when you need a break from writing from your heart. Over the years, I have learned that I need to put a focus on self-care, and if that means not writing for a couple or a few days, then that is what I try to do. How to recognize what my triggers are when writing is something I am always learning.

I have an anthology slated for the Fall of 2022 called Silence to Strength (Kegedonce Press). I put a call out for submissions to gather other Sixty Scoop survivor stories. I wanted to compile writings that allowed others to tell their stories too. I will also be working on a YA Novel proposal and sending in the draft manuscript for that, so that I can also write for a younger audience, bringing to them the same issues that affect Indigenous peoples but in a lighter way.

Christine Miskonoodinkwe Smith is a Saulteaux woman from Peguis First Nation. She is an editor, writer and journalist who graduated from the University of Toronto with a specialization in Aboriginal Studies in June 2011 and went on to receive her Master’s in Education in Social Justice in June 2017. Her first non-fiction story “Choosing the Path to Healing” appeared in the 2006 anthology Growing Up Girl: An Anthology of Voices from Marginalized Spaces. She has written for the Native Canadian, Anishinabek News, Windspeaker, FNH Magazine, New Tribe Magazine, Muskrat Magazine and the Piker Press. She has also co-edited the anthology Bawaajigan with fellow Indigenous writer Nathan Niigan Noodin Adler.

These are the Stories

Memories of a 60s Scoop Survivor

These are the Stories is collection of personal essays comprising the life of a survivor of the Sixties Scoop. Christine Miskonoodinkwe Smith reveals her experiences in the child welfare system and her journey towards healing in various stages of her life. As an adult, she was able to reconnect with her birth mother. Though her mother passed shortly afterwards, that reconnection allowed the author to finally feel “complete, whole, and home.” The memoir details some of the author’s travels across Canada as she eventually made a connection with the Peguis First Nation in Manitoba. These are the Stories is an inspirational and courageous telling of a life story.