The Word on the Street is just around the corner, starting this Thursday, September 16 and wrapping up September 26. In pre-pandemic times, the Word on the Street was a sprawling and beloved outdoor literary extravaganza taking up the entire property at Toronto's Harbourfront Centre (since a move from its previous home in Queen's Park). In 2020 and 2021, however, the festival shifted its full programming online, meaning you can stream readings, panel discussions, workshops, and more, all for free (with donations appreciated), from the comfort of home.

To celebrate the festival's powerhouse line up, we are speaking with three of the incredible authors bringing their talents to the 2021 festival: Ralph Benmergui, author of I Thought He Was Dead (Wolsak & Wynn), Emily Brewes, author of The Doomsday Book of Fairy Tales (Dundurn Press), and Hollay Ghadery, author of Fuse (Guernica Editions).

Each published by independent Ontario houses, the authors will be participating in three hotly anticipated events: Ralph at So Funny It Hurts: Memoirs of Grief and Resilience (September 25 at 5:30pm); Emily at Hopeful Apocalypse: Climate Fiction for the Cautious Optimist (September 20 at 5:00pm); and Hollay at Hard Feelings: Processing Trauma Through Writing (September 23 at 5:00pm).

They tell us about their new books that helped inspired the events in which they're taking part, a few surprising upsides of virtual literary events, and the indeliable Ontario spots that have inspired them over the years.

Tell us about the book you're featuring at The Word on the Street this year.

It’s called I Thought He Was Dead. It’s a memoir that weaves my personal and professional life together and filters that journey through a spiritual lens. From stand-up to the CBC and beyond I try to take an honest accounting of what has been a gifted but sometimes harrowing life.

The book I’m featuring is my debut, The Doomsday Book of Fairy Tales. After living underground for 35 years following a global climate collapse, Jesse strikes out on a quest to find their long-lost sister, Olivia, accompanied by a talking dog, and a head full of half-remembered fairy tales. It aims to be the centre of a Venn diagram of Vonnegut’s Hocus Pocus, Atwood’s Oryx & Crake, and Ellison’s A Boy And His Dog.

My book Fuse is a memoir in meditations on biracial identity and mental illness. Using my own experiences as an Iranian/white individual who’s struggled with OCD, eating disorders, self-harm, and addiction, I explore the documented prevalence of mental health issues in biracial women, while also navigating tangential intersections of sexuality, biculturalism, family, motherhood, and gendered power relations.

This year the festival will be a virtual event. Does this change your approach to a literary event? What challenges or opportunities have you found in virtual literary events during the pandemic?

I have had no experience of a literary event during the pandemic. 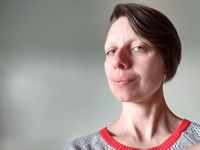 Not really. I’ve not had the opportunity to participate in an in-person event, so I can’t compare and contrast with my experience of virtual ones. That said, I do experience a fair amount of social anxiety, so I like that I can participate in an event from the comfort of my own home. I don’t feel as much pressure to prepare for every possible contingency, which helps me relax. Plus, without virtual events, my pandemic publication would’ve been in a promotional pickle.

It’s hard for me to make a comparison, since Fuse is my debut and WOTS one of the first literary festivals I’ve been a part of. (I read at Eden Mills as a first year MFA student. I believe I was selected by a draw of interested students, so I was not invited to read based on the merit of any published work.)

While I do admit I’m curious about what I’m missing at a live event (e.g. the energy, in-person conversations, those snap connections you can only make when you’re meeting someone face-to-face) on the whole, I view the virtual platform as a wonderful opportunity for me. I live in rural Ontario (about a two hour drive to Toronto) and have four young kids. This means while I’d have no problem making it to a live event I was a part of, it’s unlikely I’d be able to attend every festival event I’d like to in-real time. Now, I can.

So sure, virtual festivals and readings limit interaction in one way, but in another, they’ve opened up new possibilities. I’ve been to more readings in the last 18 months than I’ve been to in all my years combined. I won’t complain!

The Vibrant Voices program at The Word on the Street celebrates Ontario authored and published books. Tell us about a favourite book by an Ontario-based author that you've read.

Gary Barwin’s latest book, Nothing the Same, Everything Haunted. This story has the same wild ride and passion that a great jazz performance can bring. Grounded in tragedy and fuelled by a wild ride through cowboy life in good ol’ Lithuania.

One that stands out is Calculating God, by Robert J. Sawyer. It was one of those books that ‘found’ me at the right time. It involves a first contact with sentient alien species taking place in and around the Royal Ontario Museum, a galactic existential crisis, and anti-science zealots causing trouble. I’ve read many of Sawyer’s books over the years, and quite enjoyed the TV adaptation of Flash Forward, but this is the one I’ve reread. 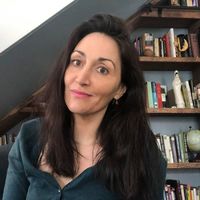 This is tough, since there are many, but I’ll go with one I’ve read recently: Stella’s Carpet by Lucy Black. I’m a fan of Lucy’s work in general (she’s written a collection of short-stories, The Marzipan Fruit Basket and a work of sort of historical fiction, Eleanor Courtown—she’s got range!) and Stella’s Carpet did not disappoint. The novel is an exquisite portrait of a family struggling to come to terms with intergenerational trauma.

Is there a place in Ontario that has been inspiring to you as a writer? If so, what do you love about it?

In the small Franco-Ontarian town of Plantagenet there is a place I have gone to for over forty years. It’s my brother’s place. Perched on a quarry that long ago filled with water it is my oasis and touchstone.

As evidenced in my book, Northern Ontario – especially in and around the stretch of highway 11 between Sundridge and North Bay – was where I grew up. The landscapes loom large in my mind, though I’ve not lived there for nearly 20 years. My youth was spent being torn between wanting to be outside and being paralyzingly afraid of most kinds of insect life. There’s just something about the strong contrasts, of colour and of texture, present in the land, the water, the sky. No matter where I go, those images feel like home.

There are two places just outside of Uxbridge, Ontario I find particularly inspiring: The Leaskdale Manse, where Lucy Maud Montogemery lived for years and wrote many of her books and gave birth to her three sons (two of whom survived) and The Foster Memorial, which was built by former Toronto mayor “Honest Tom” Foster for his daughter Ruby, who died when she was 10, and his wife, Elizabeth, who died a few years later.
Both of these places are riddled with stories, nooks, and crannies perfect for a romantic mind such as mine to crawl inside.

The Word on the Street is a national celebration of reading, writing, and literacy. Each September, it hosts hundreds of author readings for visitors of all ages and a vibrant marketplace featuring the best selection of books and magazines in Canada. The Word On The Street champions reading and writing in Canada primarily through a free celebration of storytelling, ideas, and imagination.

Ralph Benmergui is best known as a TV and radio personality. First at the CBC for over twenty years and then at Jazz FM with his morning show Benmergui in the Morning. Born in Tangiers, Morocco, Ralph and his family arrived in Canada in the late fifties, settling in Toronto. Ralph has had an eclectic career. Stand-up comic, singer in a band, national media, then government communications. Executive Advisor to the President at Sheridan College and along the way seeking out and becoming an ordained Spiritual Director.

Emily Brewes grew up in the wilds of northern Ontario, where she learned to be afraid of nature, especially bugs. She now writes wistfully of its rugged beauty and haunting landscapes. Emily lives in Toronto.

Hollay Ghadery is a writer living in small-town Ontario. She has her MFA in Creative Writing from the University of Guelph. Her fiction, non-fiction, poetry, and reviews have been published in various literary journals, including The Malahat Review, Room, Grain, CAROUSEL, and The Fiddlehead. Her personal essays have also appeared on CBC Parents and LadyLatitudes.