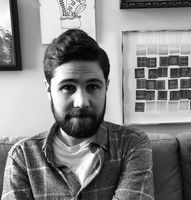 Maybe it's a response to how chaotic and unpredictable the world feels at the moment, but there has been a notable increase in our cultural interest in minimalism – from home decor to tossing anything that doesn't "spark joy", we're experiencing a collective yen for simplicity.

Poet Cameron Anstee has embraced a literary version of this paring down to the essential, as shown in the discipline and precision of his brief, crystalline poems. First inspired in part by his being gifted late poet and songwriter William Hawkins' typewriter, his new collection Sheets: Typewriter Works (Invisible Publishing) continues the minimalist approach of Anstee’s first collection, Book of Annotations.

Composed on the decades-old machine, the poems in Sheets harken back to the consideration and weight given to each micro-decision in a poem when it is written in the tangible, physical reality of ink and paper. We're excited to speak to Anstee today about the book today for our Line & Lyric interview series.

He cheekily embraces the description of "a weird one" for Sheets and explains how it began as an erasure project where he originally re-typed an entire book of Hawkins' poetry, tells us how the typewriter allowed him to create pieces that are part poem and part visual experiment, and shares his advice for poets getting their start.

Tell us about this collection and how it came to be. 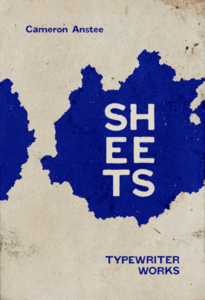 Sheets: Typewriter Works is my second collection, and it’s a weird one! It is a book of minimalist works composed entirely on a typewriter (and then scanned and reproduced in facsimile in the book itself). The book began in 2016 when my friend, the Ottawa-poet William Hawkins, died and I was given his typewriter. The first pieces in the book began as a kind of re-engagement with his poems—I re-typed one of his books from the 1960s called Ottawa Poems in its entirely and then completed an erasure using the typewriter. I then began to use the typewriter more and more to explore my own developing minimalist poetics filtered through the wonderful freedoms and constraints of the machine. It is a book that exists in an undefined space between lyric poetry and concrete/visual work. I suspect some won’t feel these are poems at all, and that’s just fine! I’m not always certain myself, but I do feel that these pieces belong together in this book, regardless of the categories that may be used (or not used) to classify them.

The title is indeed drawn from a piece in the book, “Sheets (after Jiri Valoch).” The piece was one of the first that I composed for the book, and is one of the most purely visual works that I have ever produced. It was an early experiment in the kind of layering made possible by the typewriter via feeding the same sheet through the roller multiple times and deliberately manipulating its alignment. It opened up the process of working on these pieces for me.

For a long time, the working title of the manuscript was simply “Typewriter Works”, because as noted in my previous answer I was not always sure that the term “poetry” was the correct one to apply to what I was producing. The longer I worked on the project, the more I came to enjoy the repeated action of feeding a sheet of paper into the typewriter, and that word “Sheets” grew to feel increasingly central to what I was doing.

This is my second book, and the most surprising part this time was the same as the first time—the moment when disparate pieces suddenly began to take form as a collection in my mind. Neither book thus far has started as a book in my mind, but each time there was a point where I began to think that there might be a book to be built out of the individual pieces I had been working on. On a smaller scale, I am surprised each time I “finish” a poem, I’m never quite sure how it happened or at all convinced that it could ever happen again.

So many great books! But since the subtitle of my book is “Typewriter Works”, I’ll point at some of the typewriter-related books and writers I particularly enjoyed in the last half-decade or so while I was writing the book: Some classics of the Canadian small press, including bpNichol’s Konfessions of an Elizabethan Fan Dancer (1967/1973), Steve McCaffery’s Carnival (1973), and Paul Dutton’s The Plastic Typewriter (1993); some more recent anthologies, including Typewriter Art: A Modern Anthology (ed. Barrie Tullett, 2014) and The art of typewriting (eds. Marvin and Ruth Sackner, 2015); the work of many individual poets, among them Larry Eigner, Nelson Ball, Barbara Caruso, Michael Casteels, Dani Spinosa, and Robert Lax; and the international community of concrete and visual poetry, and in particular I would point at the ongoing “TYPEWRITTEN” series edited by Petra Schulze-Wollgast for Plaugolt SatzWechsler (Germany) and Timglaset (Sweden).

What advice would you give to an emerging or aspiring poet?

Write whatever weird poems and books you think should exist in the world. There are some more visible rewards—or maybe moments of validation...?—to be had in poetry (a good review, an invitation to read, an award or an appearance on a shortlist). But those things are finally fleeting I think. What will endure are the poems (whether in a book or not) and your own satisfaction with the finished work or the process. So don’t try to write something to satisfy a magazine’s editorial board, or a jury, or a press; try to write something that you’ll (hopefully) still want to stand behind in 5 or 10 or 20 years.

For you, is form freedom or constraint in poetry?

Always both. Form is a frame that can be respected, pushed, explored, or broken, but it remains a frame, a point of reference that facilitates the work whether by restricting, by giving focus, by opening up possibilities. Find forms that are productive for you, and then poke around at their boundaries.

As ever, I am trying to write more poems, to remember why and how they may have worked in the past, and to find ways to write new ones that engage me, though nothing I could call a next manuscript exists yet. I am working on a large editorial project (a manuscript for a collected poems of a poet who died a few years ago), and just put aside an essay manuscript about small press book making in Canada. My small chapbook press, Apt. 9, has some exciting projects underway as well.

Cameron Anstee lives and writes in Ottawa, where he runs Apt. 9 Press and holds a Ph.D. in Canadian Literature from the University of Ottawa. He is the editor of The Collected Poems of William Hawkins (Chaudiere Books, 2015).

Sheets: Typewriter Works extends the minimalist explorations of Cameron Anstee’s first collection, Book of Annotations. Prompted by receiving the Olivetti Lettera 30 typewriter that belonged to poet William Hawkins after his death in 2016, the works in this book explore how small poems operate through the freedoms and constraints of the typewriter as both a decaying machine and a mode of composition. Through engagement with writers and artists like Jiří Valoch, Barbara Caruso, LeRoy Gorman, Cia Rinne, William Hawkins, Dani Spinosa, Kate Siklosi, and Norman McLaren, Sheets: Typewriter Works re-embeds the minimalist poem in the typewritten page.