María was seven years old on her first day of work, the morning her father left her in Mexico City at a large house with tall ceilings and walls that were covered in tiles. Whenever she got homesick, María would press her cheek against the tiles to feel how smooth they were, how cool. But then she would go right back to work.

Mostly, she scrubbed floors, working out the dirt with a stiff metal brush and trying to polish as instructed: so everything shone like a mirror. But no matter how hard she rubbed those long, flat stones, they only ever swallowed her face.

María slept in a shed in the garden, a place that was meant for tools. The walls were thin and full of cracks, and some nights she could hear the howls of La Llorona, The Weeping One. According to legend, the spirit travelled on the night wind in search of children, so María would tighten into a ball and lie still, taking quiet sips of air through her mouth. Sometimes La Llorona’s hollow cries would ripple María’s blanket before slipping between the slats of the shed and blowing across the rest of Mexico.

Fortunately, there was an image of the Virgin of Guadalupe in one corner of the shed. It wasn’t a real image, not even a picture. Some might have called it a stain on the wall, a splash of oil or gasoline, but that is because they did not understand the Virgin, the way she appeared to people, protected everyone who needed her. It was the Virgin who kept María from being taken away in the night.

If only the Virgin had cooked. If only she had fed the people she protected, for often, if something wasn’t clean enough or put away properly, or for no reason at all, María was sent to bed without food. Her stomach would fold in on itself, twist like the rags she had spent her day squeezing between her small but powerful hands. And the next day she would try again to be good. Sometimes she was.

Once a month, María had a day off. Once a month, the women in the kitchen of the big house in Mexico City would cluck at her and tell her how lucky she was to go home. Once a month, María tried to feel lucky, tried to want to go home. But once a month, she stepped onto the bus with her month’s wages knotted in her rebozo and she travelled dusty hours to the house with the tin roof and rusty wire, chickens and dirt floors. She liked sleeping in a bed with her sisters, their breath soft and familiar, their feet nuzzling into each other like playful kittens. But when her father had drunk all the money María had brought to him, she and her sisters would curl together and listen to the sound of their mother’s body being flung against walls.

As María got older, she studied the women in the tiled kitchen, the way they transformed food into meals. She would peer around the doorway and watch the removal of so many things: seeds, peels, bones, stems. As she got braver, she would set her chin on the counter and feel her teeth slam together as the women chopped onions, chiles, as they pounded chicken and spices. One day María stood for so long with her chin on the counter that eventually one of the women overturned a large pot and told her to stand on it.

María climbed up and steadied herself. She kept her head down to hide her smile. She was floating over the floor.

As her legs got longer, the pots she stood on got smaller, and María learned to chop and peel, stir. “I knew if I learned to cook, I could leave the floor,” María tells me, pinching the charred peels from roasted poblano chile peppers and slicing them open on a chopping board. She lifts the tip of her large knife and brings it to the centre of her eye. “So I watched everything.”

María was fourteen when she met Max, one of the gardeners at the big house. He was an adult, sixteen, the age at which she gave birth to their first child, the first of five. “Every child of ours went to school,” she tells me, placing a fist on the counter. An affirmation. “For each one we bought them: their backpack, their pencils, their books, their shoes”—she lifts a finger as she lists each item—“and we taught them not to steal anything.”

María never had a day of school herself, was never taught to read. Instead, she learned from her children, paging through their books after they had fallen asleep, sounding out letters and words while Max sat beside her watching television, shaking his head, teasing her for trying.

The children are grown now, there are three small grandchildren, and María reads everything she can find: novels, cookbooks, the paperbacks for sale at the Sunday market. “I like to read everything, it doesn’t matter what. When I am reading, I am flying,” she says and flares her eyes, smiling. “Sometimes I tell Max: while you have been watching that soccer game, I have been all over the world.”

María gathers the seeds and veins she has extracted from the chile peppers and tips them into a bucket. “My favourite is Anne Frank...” she tells me, filling the dark peppers with stretchy white cheese and dipping them in flour and eggs. “I also like the books of Isabel Allende and...”—the chiles sizzle and spit as María places them in a pan of hot oil—"...the one I’m reading now is called Virtue.” She wipes her hands on her apron and reaches for a paperback on the counter, holding her place while she shows me the cover. My eyes flutter when I notice the author, the Marquis de Sade, but María is already explaining that this is the second time she’s reading it—she couldn’t understand where the virtue was the first time—and that she enjoys reading books two or three times. “I never think: oh, I’ve read that so I need to read something new. Each time I read a book, I see something I missed the first time. Each time, I go somewhere a bit different.”

María hobbles over to the other side of the kitchen and cleans pots, pans, utensils, wipes away all traces of preparation from the counters, wincing as she walks. Her body is withering, her knees are full of fissures, tiny feather cracks in the bones. She wears tensor bandages around both knees, has lost twelve kilos since last year to try to ease the pressure on her joints, but the only thing that helps, she tells me, is sitting down.

So she does, sliding onto a wooden stool and reaching for her book. I watch her hunch over the pages, leaning onto her forearms and resting on the counter’s smooth tiles, her ankles tucked behind a rung of the stool, just above the floor.

It is the portrait of a woman, who taught herself to fly. 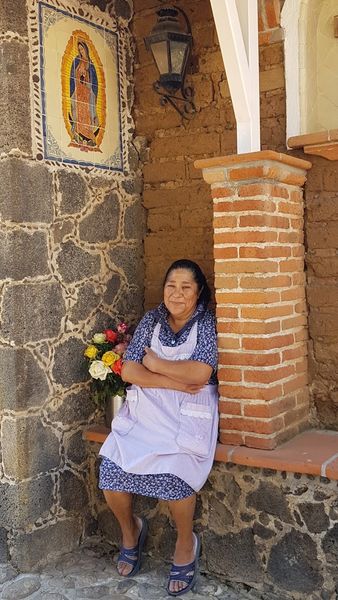 Alison Wearing is the bestselling author of Confessions of a Fairy’s Daughter, an Indigo Top 50 pick shortlisted for the Edna Staebler Prize and longlisted for the RBC Taylor Prize, Honeymoon in Purdah: An Iranian Journey, and Moments of Glad Grace. Her online program, Memoir Writing, ink., guides people through the process of transforming personal stories into memoir.