In my invitation for you to join me this month at Poetry School, I promised to offer up morsels of wisdom about writing poetry from an assortment of essays on the topic. Today I dig into an essay by American poet Louise Glück, “Against Sincerity”, from her 1994 book Proofs & Theories.

As a poet who writes searingly of her own soul’s progress through life and beyond, Louise Glück’s dissing of sincerity might at first seem disingenuous. 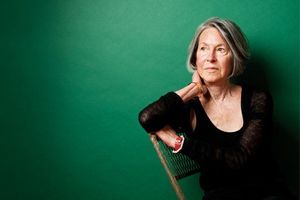 Sincerity stems from the Latin sincerus, meaning clean, pure. Sincere: 1. Free from pretense or deceit; proceeding from genuine feelings. 2. (of a person) saying what they genuinely feel or believe; not dishonest or hypocritical (oxforddictionaries.com).

Isn’t such genuineness precisely what Glück serves up in lines like these?: “But I was always that person, even in early childhood. / Small, dark-haired, dreaded by the other children.” (“The Empty Glass”) Take a step closer, and it’s clear that these statements are neither clean nor pure. “Always” is almost always untrue. “Small” is relative—an adjective chosen, not ordained; same with “dark-haired.” “Dreaded” is certainly melodramatic. We see that these lines are tainted, not to be trusted. They are grasping at uncertainty, like a hand reaching into a darkened stairwell and feeling for a switch.

Glück begins her essay by distinguishing between actuality, by which she means the world of event; truth, or “the embodied vision, illumination or enduring discovery which is the ideal of art”; and honesty or sincerity (telling the truth), “which is not necessarily the path to illumination.” The artist’s task, she writes, “involves the transformation of the actual to the true. And the ability to achieve such transformations, especially in art that presumes to be subjective, depends on conscious willingness to distinguish truth from honesty or sincerity.”

If a poem feels true, then, we might say that it is doing its job, but its success is due more likely to its dishonesty rather than the opposite. Glück reminds us that the poem is a thing invented and managed by an intelligent and sensitive poet, and not merely an unfiltered spilling of words representing experience. The poet is manipulating us readers in order to make believers of us. Under the direction of the poet, the poem lies, it embellishes, it leaves stuff out—details that, if we knew of them, might weaken the poem’s case.

“[T]he source of art is experience,” she writes, “the end product truth, and the artist, surveying the actual, constantly intervenes and manages, lies and deletes, all in the service of truth.”

And thank the Goddess, by the way, for all this managing of experience and emotion recollected in tranquility (a nod to Wordsworth in my last post). Glück reminds us of the poet and critic R.P. Blackmur’s observation that “‘The life we live is not alone enough of a subject for the serious artist…’” Amen to that.

Although lines that are unadorned or direct might come across initially as honest in their intent, or sincere, we make a mistake if we fail to separate “poetry which sounds like honest speech from honest speech.” “We are unnerved, I suppose,” she speculates, “by the thought that authenticity, in the poem, is not produced by sincerity… And the process by which experience is changed—heightened, distilled, made memorable—has nothing to do with sincerity.”

Given that poetry begins in unknowing, with a desire for enlightenment, and that it is only at the far edge of our mystification that we might, possibly, glimpse the truth (we know it by the chills), how is it that “sincerity” ever got attached to lyric poetry (like a barnacle) in the first place, that the process of writing poetry was ever so misunderstood? All I can sincerely admit to is beginning in the dark.

“The truth, on the page, need not have been lived,” Glück tells us. “It is, instead, all that can be envisioned.” Now this is exciting, something to hunker down and dig for; so much more inspiring than merely recording what we imagine we already know.

And so I remind myself: Set your sights on the truth, but don’t count on sincerity to get you there.