"Writing is no trouble: you just jot down ideas as they occur to you. The jotting is simplicity itself—it is the occurring which is difficult." 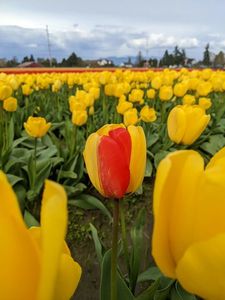 I recently attended the tulip festival in Mt. Vernon, Washington, for the first time since the pandemic began. The tulip farm we visited, Roozengarde, has vast fields striped in giant swaths of red, yellow, pink, orange, and mauve tulips. It is a gorgeous array of colour. But around their signature windmill is a smaller garden with dozens of unique varieties, some with swirls of blue-black, some with finger-like projections reaching out from their petals, some delicately striated like rose-coloured feathers. And amazingly, many of the varieties on display never existed in nature until very recently. They were designed by horticulturists, plant “breeders” who made something beautiful, something new, out of two otherwise distinct varieties. In this garden, I saw a metaphor for creativity.

People often ask writers where they get their ideas. Some writers will answer honestly and just say they don’t know, that they discover an idea like they discover the weather: they open the door and just see it. It is a mysterious process, they say.

Which is absolutely no help.

Other writers will describe the households they grew up in, the landscapes that enveloped them, the injustices they suffered as sources for their inspiration. But this doesn’t really answer the question, does it? We all have households and landscapes and hurts from the past, but we don’t all know how to create stories out of those experiences. No, we say, there must be something else. There must be some secret access writers have to a store of genius denied to common folk—and that if only we common folk could gain that access, we’d find ourselves elevated onto another plane of writerly awareness and talent.

But that just isn’t true. Sorry to be a downer.

The truth, as I understand it presently, is both simpler and more complex.

Here’s what Stephen King has to say in his memoir, On Writing:

"Good story ideas seem to come quite literally from nowhere, sailing at you right out of the empty sky: two previously unrelated ideas come together and make something new under the sun. Your job isn’t to find these ideas but to recognize them when they show up."

Notice King’s use of the word “seem.” Ideas don’t actually come from nowhere, they only seem to.

Inspiration is finding a new relationship between two established but unconnected ideas. As the Biblical Book of Ecclesiastes puts it, “What has been will be again, what has been done will be done again; there is nothing new under the sun.” In 1977, George Lucas took the genre of science fiction and combined it with the ancient hero myths he’d been reading in Joseph Campbell’s work to produce Star Wars. It was unlike anything ever seen before—yet composed of elements audiences had definitely seen before. Twenty-two years later, The Matrix followed that same hero myth, setting it in a world of virtual reality. Again, revolutionary! Except that its components were known and recognized. In both examples it was not the forms or plots themselves which astounded audiences, but the combination of those elements. The key is not finding something new, but combining familiar things in a novel way.

When I first pitched The Weird Sisters: A Note, a Goat, and a Casserole (Owlkids Books, 2022), I hadn’t written a word. I had been discussing a picture book with Owlkids, and casually mentioned to the editorial director an idea from an unpublished story I’d abandoned: three bad witches who wanted to turn their lives around by starting a detective agency. I shelved the idea and got to work on the picture book. However, several months later I got an email again asking about that witch-detective story. Something about it had resonated with the editorial director—not the witches, not the mystery, but the combination of those two for an audience of primary-school readers. Was it genius? Only in as much as all creation is genius.

But it wasn’t really mysterious, either. As I think back, I can trace the threads.

I’ve taught Macbeth to dozens of classes over the last 25 years. I’ve read and watched this play more times than any other—hundreds; I’ve lived and breathed that text. And the puns that Shakespeare infuses with such largess? In my house, we just call them “Dad jokes.”

Before I pitched The Weird Sisters, I had been reading a lot of Mercy Watson, by Kate DiCamillo, in the waiting room during my son’s drumming lessons. It’s hard not to be drawn to the zany characters and the innocence of their conflicts. This got me thinking about form, in particular the form and length of text in a chapter book for early readers.

As I started writing the mystery, I recognized the influence of Winnie the Pooh, which I had read several times to my own young children. Winnie the Pooh doesn’t have villains, per se, and what mysteries there are—like “Chapter 3: In which Pooh and Piglet Go Hunting and Nearly Catch a Woozle”—are largely based on misunderstandings. (There is no Woozle; Pooh and Piglet walk in circles in the snow, encountering more and more of their own footprints.) Thus, I had synthesized a mystery story based on humorous misunderstandings and oddball characters, chief among them the reformed Weird Sisters from Macbeth.

But it took time. I first conceived of these witch characters around 2009. I’d first read Mercy Watson in 2007. I’d first read Macbeth in 1989. Winnie the Pooh I’d known since childhood. But only when these different forms, themes, and plots came together in my mind was something new created.

So, writers: read in multiple genres, immerse yourself in the things you love, and give yourself time to find the connections between disparate elements, to form something startling out of the familiar.