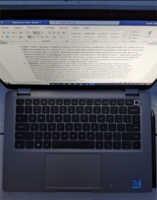 I can think of many reasons why I should not write. The pay is terrible. The hours, though flexible, are insufferably long (i.e., even when I stop doing writing, I am thinking about writing). It can be lonely, frustrating work. I’m not even sure I can call it work. Work has clear goals, objectives. Sometimes writing has neither. It is like building a house without knowing the slope of the lot—or maybe it’s just like not knowing how to build a house.

Despite these excuses, I have focused on writing for my entire adult life. Why? Because of the five more persuasive reasons I have identified below:

In the ninth grade, I had a French teacher, Réjean Côté, who was from Montreal and complained regularly about the poor nightlife of Vancouver. I was fourteen. I had no idea what nightlife was. For me, nightlife was staying up late enough for whatever show followed Magnum P.I. (Hill Street Blues came on at ten, but if that was nightlife, I wasn’t having it. Not a single Ferrari anywhere.) And so it was hard to take Monsieur Côté seriously. But one day as we walked out of class, he said something to me I have never forgotten. “You know, Mark, I have a feeling someday you are going to do something great.” Maybe he recognized that those were words an insecure teenager needed to hear. Now that I am a teacher, I suspect he probably learned that technique—random words of encouragement—at a professional development workshop on rapport-building. Either way, it stuck. I’ve had a sense that I needed to pursue something toward excellence. I haven’t made it to the NBA—yet—so I write.

Is writing a neurotic pursuit? Maybe not in the strict, clinical sense, but the sense of destiny mentioned above has a nasty underbelly. Feeling that one is meant for something great can make it sometimes hard to content oneself with the mundane moments of life. Grocery shopping, cleaning up, simply being present. I confess there have been times that I have worked on stories to the exclusion of beneficial things like social occasions, or reading for pleasure, or sleep. Sometimes I have felt—immaturely, I know—that my life would lack meaning without success in this area. Thus I have often felt compelled to write out of a fear of who I might be if I did not write. I have had to set boundaries with myself, to remind myself that writing is a hobby for me; for others it may be a career. But even for those who consider it a calling, success in writing is not the measure of a life. My friends, my family, my soul—these are better indicators of what I am doing with my life.

Writing well is a skill learned over time, and it does feel nice to receive a glowing review, especially after repeated rejections, years devoted to writing without any sense that the product will ever see the light of day. But that feeling can morph into hubris, as well, a feeling that I am somehow superior because of the achievement, that I am special. (I mean, only the proud use words like “hubris”. Normal people just say “pride.”) Extrinsic reinforcements are sometimes a motivator, I admit. But then, what it mean to receive a critical review? Am I suddenly not special? The work itself isn’t different, so why do my feelings swing so much? I have learned—am learning—to work from a place of care rather than a place of insecurity, to respond to successes as gifts and criticisms as opportunities to learn. I know it sounds weird to remove the writer from the writing, but that is what I sometimes imagine. No pride and no dejection—just doing the work as well as I can because the story deserves to be told well. I try to think of myself as the steward of the story, not the master. It sometimes works.

I have faith in God, I support many social justice principles, I have environmental concerns. These don’t make me special, but they do give me a reason to write. I sometimes feel I might make a greater impact in these areas if I wrote nonfiction. It’s just that I’m really not an expert at anything. So, stories it is. I have read that some stories’ purpose is merely to entertain. I do try to entertain, certainly. And sometimes the process entertains me, especially when it comes to the kind of wordplay I’ve been able to produce in The Weird Sisters—dad jokes galore! But the entertainment is the vehicle for the theme, and it is the theme I am most committed to. I write fiction because that is what I enjoy, but I hope it is infused with a principle which, if exercised, would leave this world in a slightly better condition.

My first experience of “writing as healing” was in a writing class under Carolyn Mamchur during my Master’s studies. One of the other students in my cohort read a moving piece in which she had woven a nursery rhyme into a nightmare of abuse. The writer, discussing it afterward, was visibly affected by recalling the experience, but was composed enough to clearly articulate her intentions in writing the piece. Carolyn complimented her, then pointed out to the class that a writer’s ability to step outside her trauma and put it into words is evidence of healing.

When I was younger, I often lamented that I could never be much of an artist because I’d suffered no trauma. I contented myself with writing on topics that interested me, that stimulated my imagination or my sense of humour. Trauma would have to be for other writers, serious writers. Only after looking at a number of pieces I had written, however, was I able to see a pattern: many of my stories have been centered on connectedness, particularly with father figures. Could that be related to the fact that I never knew my natural father? Bazinga! Though I had never set out to write as a means of healing, unconsciously the writing itself had been revealing to me what I need to heal from.

Who knows what future stories may reveal?