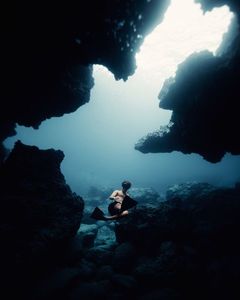 Do you listen to music as you write? I often do, particularly when writing a short story, but it has been several months since I typed the night away with a melody playing in the background. At this moment, I find that silence is my best — my wisest— companion while I plough through my manuscript and wrack my brain for the right images and words. Perhaps this change has to do with the fact that I’m now in the process of writing my very first full-length novel, and I’m discovering that some of the things that propel me forward when I’m tackling short fiction may easily become a hindrance in the face of this new challenge.

Writing while listening to music has always been a bit of a juggling game for me. When I’m writing a short story, picking the “right” music can help me find, or evoke, the “right” emotion —which, given the nature of my writing, is always raw. And once I’m in that place, my own vulnerability guides my words. The process is intense and sometimes quite painful but, because it’s short, I feel safe, and wouldn’t have it any other way. My characters and I share the emotional journey with music as our companion and, by the end of the night, we’re done.

But since I have begun working on my novel, things have changed. At first, listening to music took just a bit of juggling. I may have been deep into the conflict of a certain scene and, if I was listening to a piece I liked, I had to fight the urge to actually listen to it, to pay attention to its notes and cadences. And if the song (or aria, or symphony) brought me memories, I found it even harder to stay focused. Why? It was as if my entire body was rebelling against me, so I had to give in and listen to it. To give it the silence it craved because it was impossible to work while my mind drifted away, as if enchanted by the tune, too happy splashing about in the past to care at all about the present. That’s how I discovered that, for me, writing my novel is all about the present: the here and now that allows me to safely dive into the there and then without getting lost or leaving behind any of the characters.

I was watching Thirteen Lives on Netflix the other day, the movie about the group of young boys and their coach who got trapped in the depths of a flooded cave in Thailand and were rescued by a group of incredibly brave and experienced volunteer divers. Knowing that the events portrayed on screen had taken place in real life is enough to make anyone’s hair stand on end, but watching the scenes that were filmed underwater and the dexterity with which the divers tied their line along the way to make sure they’d be able to make a safe return to open air was illuminating. The movie helped me understand that at the present moment, writing, for me, looks very much like the action I saw on screen. And, in my case, there cannot be any soundtrack. Not yet.

Celebrated Nicaraguan writer and poet Gioconda Belli told me once that, for her, the process of writing a novel is akin to traveling on a boat completely surrounded by fog, and that the fog starts dissipating and slowly revealing the land ahead once her journey is nearly over. For other writers, attempting a novel is an expedition that requires a map and a very specific plan, a plan that sometimes anticipates what will happen in each and every scene. But I’ve never been able to write with a plan in place.

Now with the novel I’m no longer within the confines of a few pages where I can easily get to shore, but in the turbulent waters of an underground cave, and the process feels very much like a diver’s experience. I’ve submerged myself in the unfamiliar waters of a different time and era, and I feel like I’m navigating the darkness of my mind in search of my characters. I must now bring them to the safety of my computer screen all the while making sure I don’t lose them, or get lost myself, on the way out. I need my full attention on what I’m doing, on every movement I’m making, because these characters are living beings and they need to continue to breathe and tell me their story as we go. Who knows if we’ll make it out of that metaphorical subaquatic cave in one piece —we won’t be fully out until the first draft has been completed. But listening to music feels like too big a risk to take while undertaking such a journey. I fear it might make me stray and, for the first time, I truly understand Odysseus as he fought the alluring voice of the sirens. Perhaps my future writing projects will let music make a comeback as I work. For now, I’m completely under water, and grateful for the chance to be there for as long as it takes.

And speaking of gratitude, since this is my last post as Writer-in-Residence, I want to thank everyone at Open Book for having given me this wonderful chance. And I want to thank you, my readers, for the time and attention you graced me with by visiting this virtual space during the month of September. In Mexico we have an emblematic song that accompanies all farewells. It’s called La golondrina (The Swallow). The music was composed by a Mexican exiled in France in the 19th century, but the lyrics are inspired by an ancient Arabic poem written by the last Abencerraje King of Granada when he was expelled from his land as the country we know now as Spain was being born. It is a beautiful song, full of melancholy that, when played by a mariachi band, goes straight to the heart of any Mexican listening. Of course, my farewell to this blog space is hardly dramatic, but since I began this entry talking about music I thought you’d be interested to know this story – and also, to be frank, because every time I think of farewells the melody of La golondrina plays a few notes in the back of my mind. Muchas gracias for your company. I hope that our writing, reading, and literature-loving paths cross again soon. ¡Hasta pronto!