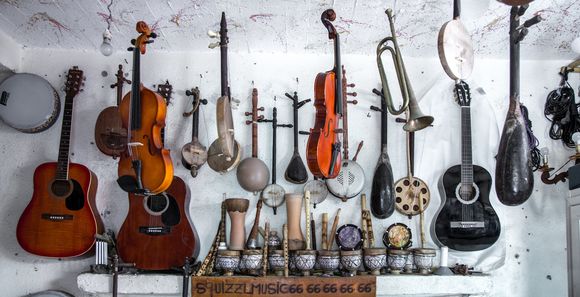 Growing up surrounded by music was a unique privilege whose ramifications, as a child, I was incapable of comprehending. I developed an impeccable musical ear, of course, but more than that, I bore witness to the enormous sacrifices and discipline that are hidden in plain view behind a successful career. As I played with my dolls I could hear my mother practicing the piano for hours on end, going over the concerti she was preparing or the new repertoire she had decided to learn. I watched my father remain in the exact same spot all night, from the time I went to bed at night to the time I left for school early in the morning, memorizing scores and making notes. On stage, people saw the final result of those efforts. By then, however, I was sick of the pieces that were being played: I had heard them ad nauseam.

It was only years later, as I fashioned myself first as an actress and then as a writer, that I realized how valuable my parents’ example was. I always welcomed the opportunity to have more rehearsals, or to write another draft. After all, what is a draft if not a rehearsal? It’s the safe space where we are allowed to err and experiment. How many times must a musician (or an actor) rehearse a piece (or a scene) until they are able to interpret it as perfectly as possible? It doesn’t matter. As many as it takes. The same goes for writing.

I have had the enormous pleasure of founding and teaching the Creative Writing in Spanish courses at the University of Toronto’s School of Continuing Studies since 2009, and one of the first things I say to the beginner writers who enroll in my classes is precisely this: be ready not only to write, but to rewrite, and then rewrite again and again and again. And again. I find it puzzling when someone expects to produce a perfect piece the first time around. My mother’s voice is etched in my memory saying that the only composer who ever got away with writing perfect first drafts was Wolfgang Amadeus Mozart. His immaculate scores are a testament to his genius. In contrast, she added, Beethoven’s scores were full of corrections. Was Beethoven a lesser talent? Absolutely not.

Practice and patience are key to honing one’s skills and perfecting the craft. This is true of all artistic disciplines. The problem we face nowadays, in my opinion, is the desire to achieve instant success. People go into the arts for the sake of applause, and unsurprisingly, they get discouraged when they crash against the iceberg of work required to sustain even the smallest of triumphs.

This may sound random, but it is the point I wanted to make all along, so I’ll just get to it and state, in unequivocal terms, that this is the reason why I have a love-hate relationship with Submittable, the portal of choice of most literary journals, magazines, and publishers. I understand its convenience, but hate the fact that it’s so impersonal (using it feels like throwing one’s rolled-up manuscript inside a bottle tied to a rock into the ocean). But, to be completely honest, what I hate the most is that it keeps count of all submissions. Why? Because every time I log into the site, it offers me a chronologically detailed record of all my failures. It’s hard to look at it without feeling discouraged. Paradoxically, I also love this feature because it never fails to ground me. If I’m celebrating that a piece was accepted for publication, the long list of rejected submissions reminds me how arduous the journey was to get there. It reminds me that it’s all, still, a rehearsal.

A writer’s performance is the published piece bearing their name —your name— on the cover. Like all performances, it, too, can have bloopers (typos, anyone?) —and it is always subject to improvement. Gabriel García Márquez, winner of the 1982 Nobel Prize in Literature, refused to re-read One Hundred Years of Solitude because he couldn’t control the urge to make changes and rewrite entire portions of this, his masterpiece. Mexican poet and writer José Emilio Pacheco, who received the prestigious Miguel de Cervantes Prize in 2009, was known for crossing out words in his books as he autographed them for his readers, because he had decided that this or that expression was better than his original choice. This endearing gesture, in my opinion, embodies the quest that writing truly is —or should be.

This is why we, as writers, must never be afraid of finding ourselves writing and rewriting. Each story, each book has its own process, and much like our own children, each one has its own particular needs. And those needs are organic — they cannot be imposed. While a certain text might need several drafts, another might require fewer. There is no set rule, no magic number. Sometimes, the best way to move forward is by retracing our steps and taking a totally different, unexpected direction. Cut, edit, ponder, rephrase, delete; start all over again. Who’s keeping count anyway?