Ryan is the creator of Dinosaur Comics and the writer of The Unbeatable Squirrel Girl comic series. He also wrote 35 issues of the Adventure Time comic series. And he’s the author of two choose-your-own-path adaptations of Shakespeare’s plays: To Be or Not To Be and Romeo and/or Juliet. He’s also working on a super-secret writing project for kids (a picture book! shhhh!). IS THERE ANYTHING RYAN CAN’T WRITE?

Ryan is an exceptionally talented humour writer, and one of the things I find the most interesting about his work is that he’s always experimenting with new formats, whether it’s a picture book, the confines of his constrained six-panel webcomic or a choose-your-own-path story! (ALSO, “CHOOSE YOUR OWN ADVENTURE” IS TRADEMARKED! I WISH I’D KNOWN THAT WHEN I WROTE SO, YOU WANT TO BE A ROCK STAR? IN GRADE FIVE.)

Aside: I always tell Ryan that he uses “too many words!” in his writing, because I think that’s a funny thing to say to a writer. This really annoys him, but it makes me laugh and laugh and laugh. But I should stop annoying Ryan because he’s one of the nicest people I know! Ryan is also one of the hardest-working people I know. Seriously. We could all learn a lot from Ryan. Also, here's a picture of Ryan and me from that time we went apple picking. 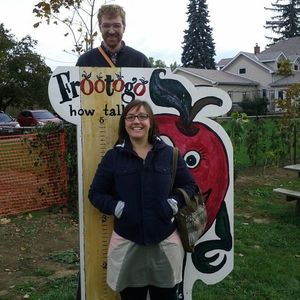 INTERVIEW TIME! We’re going to talk to Ryan about all-ages writing, his favourite children’s books and, of course, farts.

Much of your work to date (Dinosaur Comics, Machine of Death, To Be or Not To Be, The Unbeatable Squirrel Girl) has been geared towards young adults and adults. Why did you decide to write a picture book for kids?

Here is my secret to all-ages writing: you write how you normally would, but with two rules—everyone keeps their clothes on, and nobody swears. Do those two things and you will be well on your way to writing a story that's enjoyable for both babies and skeletons, and as we both know, those are two very hot markets.

When it came time to write my (AS YET UNANNOUNCED) picture book, I was interested because of the format challenges: picture books aren't unrelated to comics, where I do most of my writing, but they're still a very different beast. The types of stories you tell become more—grand, I think. More universal. They're still stories about a particular person, but you need to distill them down to their core. In comics you can write a sentence and you're kind of done. But in picture books you agonize over each word because there's so few of them, and every single one of them has to count.

I just made all those up off the top of my head. Can you believe it?

YES, I CAN BELIEVE IT. AFTER ALL, YOU ARE THREE-QUARTERS MAN and ONE-QUARTER WIZARD, RYAN. What’s your approach to funny writing when it comes to adults? Did your approach change when you were writing your picture book?

Not really. They're different audiences, obviously, but my approach and process weren't too different. When I write I try to make myself laugh, which means I always write alone, because it's really embarrassing to be out in public on a computer typing and then go, “Ho ho ho, excellent joke, self! Quite a roguish wit you have there.” So I do that exact thing at home instead where nobody can see me.

Besides jokes, you're trying to write something that makes you feel something when you write it and, even more importantly, makes you feel something when you read it back and, most importantly of all, makes someone else feel something when they read it too. It's weird how stories can do that, like stored emotions in a box. Want to feel sad? Here's the book to reach for! Want to feel wistful about a race car who realizes that the things she's REALLY racing are her own preconceptions of what a race car can be? Read this, and that emotion will be available to you! It's really interesting, and one of the things I like about reading the most.

For current books, I love everything Jon Klassen works on. I love the sense of chaos they have there: picture books can sometimes get into a rut of “here is a story for children, here is a moral about how it's good to share, the end.” And that's fine, but it can start to feel a bit samey. Jon Klassen's books are about real people who happen to be bears or shapes or sometimes people, and they behave in that way, with actual emotional lives. Also, they are hilarious and truly all-ages. My highest recommendation!

When I was a kid, I read a lot of Dr. Seuss. I remember The Sneetches and Other Stories well: it's about people without stars on their bellies who want them, going through machines to get them, but then the original star-bellied Sneetches don't like how common star bellies are becoming and go through machines to get rid of them, until they're just running through the machines in a loop. I looked it up on Wikipedia just now and it was intended as a satire about discrimination, showing how racism is bad!

Also, you shouldn't be racist either.

I guess we all learned something about, uh, the importance of lessons, Ryan. One last question. Fart jokes in children’s literature: Yea or nay?

The very fact you call it “literature” shows the heights a good fart joke can reach, Naseem. I am not going to come to you, a connoisseur of the finest fart jokes, and tell you they are bad. I'd sooner tell Muhammad Ali that punches are bad, or Chuck Norris that kicks are bad, or Sherlock Holmes that deduction is bad, or James T. Kirk that beaming down to an alien world and getting into a fight where you tear your shirt so that everyone can see your abs is bad.