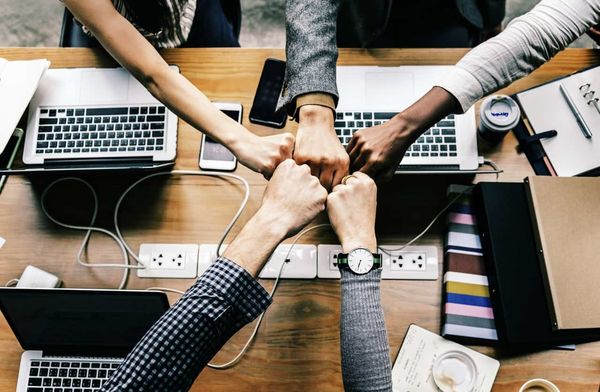 I spent years working on a novel about a lifeguard who was terrified of drowning. Years, of sitting in the same corner of the same coffee shop bashing out draft after unreadable draft. And the only feedback on the project over the years were rejections from granting agencies, editors, and agents. It was demoralizing, to say the least.

I’d done formal workshops in undergrad and as a graduate student, and I could see the potential in the process, and I’d tried over the years to start writing groups—but it was hard to find likeminded writers, writers in the same phase of career, writers whose work I admired, writers whose feedback was helpful, writers who were committed to meeting regularly. There were false starts, and some long, drawn-out drama-filled groups. It was never a good fit.

And then, over coffee one afternoon, an Instagram friend-turned-IRL friend said she knew a few other writers who were looking for external feedback. I had started a new project and knew I didn’t want another repeat of the lifeguard book.

We shared work ahead of time—pages from a memoir about birding, writing about menstruation, a fictional project that explores infertility, a spec lit project, and fictional letters to Amelia Earhart, and then we met at a coffee shop in the west end. It felt like a blind date with four strangers.

On that February Sunday in 2018, we became the Semi-Retired Hens (a line from an essay that would end up being in Julia Zarankin’s memoir, Field Notes of an Unintentional Birder), and we’ve been meeting (almost) monthly ever since.

We’ve supported each other through every phase of the writing and publishing processes—getting agents, leaving agents, getting new agents, the nerve-wracking uncertainty of being on submission, grant rejections, and manuscript rejections. We’ve seen four projects turned into books and celebrated each one. We’ve helped shape each other’s work, shifting from first person to third, adding in characters’ backstories, tightening scenes, and expanding scenes. We have collectively mourned characters that ended up on the cutting room floor. Their feedback on my work has been truly invaluable, and I don’t know what I’d do without our group chat that buoys me when I’m in the muck of a millionth draft and want to throw it into the sea

But even beyond the monthly feedback and the daily cheerleading, the best part of this group has been reading in-process work. Providing feedback on rough, unpolished work has helped me figure out how stories work, what dialogue can do, how to structure narrative, in a way that reading polished, edited work just can’t. My writing has gotten immeasurably better since that coffee shop meeting in 2018 and I am endlessly grateful.

So, how do you make a writing group? I conducted a very informal social media poll, and discovered that social media is a great place to ask around. Other writers have built their writing groups off continuing ed writing programs and writing workshops. The Shit No One Tells You About Writing podcast has a searchable hashtag for writers looking to creating writers’ groups: #WritingGroupMatchUpTSNOTYAW and TSNOTYAW podcast host and author Bianca Marais runs a monthly initiative to help writers find beta readers and writing groups.

The Hens write in different genres, and are at different points in our respective projects, but some groups want to all be writing in the same genre, or be at a similar place in the process—whatever works for you!

My writing group is made up of four of us (the fifth writer who started with us had a looming deadline, so she slipped out of our monthly meetings, and published her incredible book!) but based on my social media poll, the range was from 3-6. Some writers also opt for one-on-one exchanges instead of having a group.

My writing group meets once a month (usually!), which seems to be the average schedule, but other groups meet weekly, or sometimes sporadically. There’s no perfect timeline here, but whatever works for your group of writers and what their writing goals are.

So what are the benefits of having a writing group? External deadlines and accountability ranked up there as the most popular benefit, along with having an invested community of writers. We all know it can be lonely and isolating, living in these worlds we create, and having a group of people connected and committed to your written world is a balm.

Receiving feedback from fellow writers is also a huge benefit, something I wish I had had more of earlier in my career. Having three varying perspectives and takes on my work opens up potential possibilities as I’m rewriting and editing and figuring out where my stories go next. Some meetings, we don’t even give feedback on writing, but on ideas, and spend time brainstorming and fleshing out storylines. It is really just so much fun.

After a few failed attempts at writing groups, where one writer kept submitting work that was twice as long as everyone else’s (and kept “running out of time” to read the rest of our work), I’m a firm believer in setting out guidelines including:

1). a prescribed length of time to send work before a meeting (a week, a few days…)

2). a page limit (The Hens used to use 15 pages as a benchmark when we first started, but now, with consent and lots of advance time, send 100+ pages some months, depending on where we’re at in the process and what we need as writers)

3). a fair schedule about who submits when. The Hens generally submit something we’re working on every month, but in some groups, not everyone submits work for every meeting. Make sure it evens out in the end—nothing is more frustrating that providing feedback on everyone else’s work only to not have it provided to you.

It’s not always intuitive, especially at the outset of a writing group about how to provide helpful feedback (and, truth be told, I’m not always the best at receiving feedback, ahem!). I’d highly recommend Craft in the Real World by Matthew Salesses for so many reasons, including the potential workshopping formats and feedback models he includes.

Thank you to everyone on social media who shared their thoughts and insights!