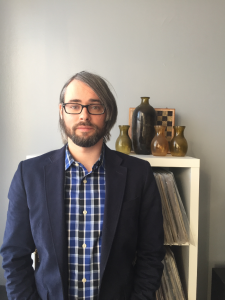 J. Robert Oppenheimer is known for his reluctant but irreversible legacy as the father of the atomic bomb and director of the infamous Manhattan Project. But there was more to the man than the bomb, and in his new novel, Y: Oppenheimer, Horseman of Los Alamos (Coach House Books), Aaron Tucker explores Oppenheimer as the complex individual he was. Book lover, pacifist sympathizer, genius scientist, husband to a radical communist, philanderer, and more, Oppenheimer comes alive in Tucker's lyrical prose, set against the surreal background of Los Alamos, New Mexico. All the while this complicated man ushers the world irreversibly into a violent future as he develops the first ever weapon of mass destruction.

We're excited to welcome Aaron to Open Book today to take our Lucky Seven series in celebration of the publication of Y. He tells us about how he first encountered the surprising personal details of Oppenheimer's life, the three words he would use to describe the man, and how poetry impacted Oppenheimer's life and personal morality.

J. Robert Oppenheimer was the director of Project Y at Los Alamos, the scientific hub of the Manhattan Project. I had been reading a string of non-fiction books about scientists and mathematicians and happened on American Prometheus by Kai Bird and Martin J. Sherwin, and was struck by the seeming contradiction of his sensitivity and intelligence and humanism versus his work building the only weapon of mass destruction ever deployed. Beyond this, he was brilliant, a true multi-lingual polymath, the first to fully theorize the existence of black holes (which was proven mere years after his death); he was also deeply troubled for long stretches of his youth, solitary and frustrated with the world, lashing out at his friends, literally assaulting them, trying to poison another; he supported many Communist causes in the States but was also a fierce patriot and defender of American values. I am still not sure he was a good person, or someone I admire, but I was really curious about how all his parts fit together.

Because I was writing about a real person and series of historical events, I had to navigate all the many, many non-fiction texts and versions of Oppenheimer. How he began to take on a “life of his own” was through the smaller details of his life that leaked into his letters, or spilled over the edges of the larger historical events, say how, during his time at the Manhattan Project, he dressed as a waiter for a themed party based on secret desires. Mostly though, the New Mexico landscape became a way to animate him and was the clearest path for me to understand him and recreate a version of him; he was so deeply in love and tethered to the forests and deserts there, well before Los Alamos was chosen as the site for Project Y, that reading histories and descriptions of those places, in particular Peggy Pond Church’s The House at Otowi Bridge, and eventually travelling to and spending a few days there, illuminated his construction of self.

I think he most reveals himself in the love triangle that forms that emotional core of Y, between himself, his wife Kitty and his mistress Jean Tatlock. Both women were exceptionally smart and forceful, and in very different ways, exactly complimentary to Oppenheimer. I think though that each also give a clear picture of his deep flaws and darker motivations and egotistical pride.

Oppenheimer’s appearance was very important to his own sense of self, in particular his fashion, and so I was fascinated by all the photos of him. He was a very handsome man, and nearly all the description of him rapturously focus on his electrifying eyes; he knew all this and used this to his advantage, eventually branding himself, for lack of a better word, with his iconic pork-pie hat. However, he also struggled with illness his whole life; in fact, his battles with tuberculosis was the reason he ended up in New Mexico to begin with, which acted as a sort of open-air sanitarium in the 1920s. As such, he always battled with a sense of physical frailty which was often a manifestation of his own anxieties: he came to the Manhattan Project standing close to six feet tall but weighing only about 130 pounds; he then lost a further 15 by the time of the Trinity Test.

a. Arrogant: he was exceptionally smart and knew it; he had little patience for people he thought of as lesser than him, and that attitude often put people off; I think this sense of self only inflated after the Trinity Test, despite his eventually misgivings about his role in constructing the first atomic bomb.

b. Romantic: he loved poetry, in particular John Donne and George Herbert, and went out of his way to memorize those texts, and to learn a wide variety of languages so that he could read the originals of poetic and scientific texts, rather than the translations. He learned Sanskrit in order to read the Bhavagad Gita, the long poem that I would argue was his central moral document.

c. Duty: This is a word that reoccurs often in the Gita and I think his high-minded sense of responsibility (to Science, to America, to Democracy) was the primary driving force that he used to internally justify his work on the atomic bomb.

Considering that Oppenheimer is broadly well-known and that there are numerous excellent biographies of his life, but with a good number of them focused on his martyrdom to the Communist witch hunts of the 1950s, I felt liberated to enact a lot of the historical plot points of his life as metaphor and description, as the sort of poetry he loved so deeply, rather than as facts. I think my version of him is much more solitary and internal than the more historical versions, but I also think that is close to the person he was; he was gregarious when hosting and drinking (which he did often), but was also a very private introvert, and I think preferred the wilderness of his own mind the most.  Rather than recreating his life, Y aims to regenerate the process by which he came to the key choices of his life, the verses and horseback rides, the vistas and formulas that brought him to public fame.

Aaron Tucker is the author of the forthcoming novel Y: Oppenheimer, Horseman of Los Alamos (Coach House Books) as well as two books of poetry, Irresponsible Mediums: The Chess Games of Marcel Duchamp (Bookt*ug Press) and punchlines (Mansfield Press), and two scholarly cinema studies monographs, Virtual Weaponry: The Militarized Internet in Hollywood War Films and Interfacing with the Internet in Popular Cinema (both published by Palgrave Macmillan). His current collaborative project, Loss Sets, translates poems into sculptures which are then 3D printed; he is also the co-creator of The ChessBard, an app that transforms chess games into poems.

Currently, he is an uninvited guest on the Dish with One Spoon Territory, where he is a lecturer in the English department at Ryerson University (Toronto), teaching creative and academic writing. He will be beginning his doctorate as an Elia Scholar in the Cinema and Media Studies Department at York University. aarontucker.ca.

J. Robert Oppenheimer: reluctant father of the atomic bomb, enthusiastic lover of books, devoted husband and philanderer. Engaging with the books he voraciously read, and especially the Bhagavad Gita, his moral compass, this lyrical novel takes us through his story, from his tumultuous youth to his marriage with a radical communist and the two secret, consuming affairs he carried on, all the while bringing us deep inside the mind of the man behind the Manhattan Project. With the stunning backdrop of Los Alamos, New Mexico, Oppenheimer's spiritual home, and using progressively shorter chapters that shape into an inward spiral, Y brings us deep inside the passions and moral qualms of this man with pacifist, communist leanings as he created and tested the world's first weapon of mass destruction? and, in the process, changed the world we live in immeasurably.