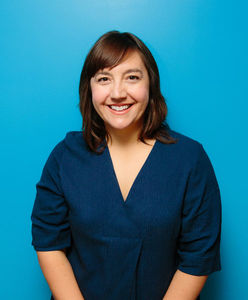 In Ira Crumb Makes a Pretty Good Friend (OwlKids), the debut picture book by Naseem Hrab (illustrated by Josh Holinaty), Ira is the new kid in town. When he realizes that could mean a lonely time at school come Fall, he launches an all-out campaign to sell the kids in his neighbourhood on how great a friend he is. Unfortunately, Ira's best laid plans to share his awesome friendship skills with a new crowd run into some snags, leaving him more worried than ever - until last year's new kid shows up to lend a helping hand.

Packed with comic, relatable, memorable moments, Ira Crumb Makes a Pretty Good Friend is proof that Hrab is much more than a pretty good writer - she's a great one, especially if what you're looking for is fresh, funny stories for kids.

We're very excited to share the news that Naseem will be joining the Open Book team for the month of August as our writer-in-residence. You can get to know Naseem today with our discussion about Ira and much more, part of our In Character interview series.

Naseem tells us about the tasty origins of Ira's last name, the literary value of improv classes, and what she and Ira have in common.

Be sure to stay tuned to Open Book in August to hear more from Naseem!

What can I tell you about Ira Crumb? He’s a super exuberant, fun kid whose interests include cheesy sandwiches and dancing. He’s just starting to learn what makes a good friend — he’s not quite there yet, but he’s trying! And he’s got a lot of heart. The amazing Josh Holinaty illustrated the book and created Ira’s character design — Ira is SO adorable!!! And he’s got incredible style!

I think it’s a fine balance between the two. If you’ve crafted a strong, 3-dimensional character, they’ll take on a life of their own. When I write, I’m not thinking about what Ira could or should do in a given situation, I’m asking the question, “What would Ira do in this situation?” And I know I’m on the right track when an idea pops into my head and I think, “That’s so Ira!” or “What an Ira thing to do!”

Sometimes I name characters after people I know or, in the case of Ira, I chose a name I love the sound of. I’ll let my brain sift through a few options before I settle on one that feels right. Ira originally started out in my head as a little piece of cake, not a little boy, so that’s how he got his last name.

I love writing dialogue much more than writing prose. I’ve taken a lot of improv classes, so I end up doing some acting as I write: I usually say the words out loud to myself over and over with emotion until I hit on something that sounds authentic to the character. In terms of Ira’s dialogue, he has a very particular internal logic, so I’ll ask a question like, “What is the most awkward thing someone could say in this situation?” and then try to answer that question out loud in Ira’s voice.

I love watching television, so my number one recommendation for writing great dialogue is: watch a lot of Netflix … with the closed captioning on. It’ll help you pay attention to what’s being said by different characters and how they say it. Do you notice the dialogue or not? If you really notice the dialogue, it might be because it’s stilted or overwrought like on Dawson’s Creek. (Sorry, Dawson fans!!!) I feel like good dialogue communicates a lot with just a few words and it relies on emotion. Also, silence can be more powerful than dialogue in some situations, so there’s that to consider, too. My other recommendation is to listen in on other people’s conversations on the subway or in cafés and pay attention to the rhythm and cadence of how different people speak. It’s fun! (… and creepy!)

Oh, Ira and I have plenty in common! We’re both good at coming up with seemingly brilliant ideas that don’t pan out and we’re both equal parts endearing and annoying. I’m also just as yelly as Ira is!!! In terms of differences, I’d say that Ira’s a bit more inexperienced in social settings than I am, but that’s what gives him his moxie! He’s so much braver than I am.

I think that the all-time, most memorable characters I’ve come across is the cast of The Baby-Sitters Club. Like, uh, EVERYONE in my elementary school, I was super into the series and, over 25 years later, I can still list off the characteristics of each babysitter. That said, maybe reading a hundred of the books in the series drilled the characters into my head! I’m also a huge fan of Mo Willem’s work and I love his characters: Pigeon, Elephant and Piggie, Leonardo the Terrible Monster. They all have very clear desires and go about trying to get what they want in ways that are very unique to them.

Right now, I’m working on a third Ira Crumb book. The second one comes out in Fall 2018 and it is tentatively titled Ira Crumb Feels the Feelings. And I’m also teasing out a bunch of other picture book ideas including one about a stay-at-home mole and an effervescent snail.

Meet Ira Crumb. He’s the new kid in town. He knows what that means: when the new school year starts, he’ll play alone at recess, eat alone at lunch, and walk home alone at the end of the day. So Ira launches a whole-hearted campaign to befriend neighborhood kids before the first day. But his best-laid plans — A sandwich stand! A dance-off! — fall flat, and playing it cool doesn’t seem to work either.
Just as Ira decides school will be HORRIBLE, a comical misunderstanding connects him with Malcolm, who was the new kid last year and totally gets it — and who, it turns out, will make a pretty good friend.
Full of comedic touches, comics-style storytelling, and a diverse cast of quirky characters, this hilarious debut picture book puts an endearing spin on the anxiety that accompanies change and making friends.