Last night, at a gala in Toronto, Lisa Grekul and Lindy Ledohowski were awarded the 2018 Kobzar Literary Award for their book Unbound: Ukrainian Canadians Writing Home. Presented every two years by the Shevchenko Foundation, the Kobzar Prize recognizes a Canadian book that most effectively presents a Ukrainian Canadian theme. A multi-genre award, the prize accepts submission of poetry, drama, fiction, non-fiction, or books for young readers. You can read more about the prize and meet all of the finalists in our interview with them here. 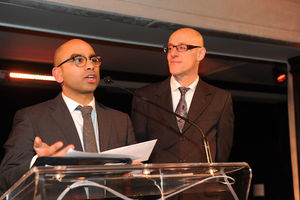 Unbound is a book of original essays by contemporary Ukrainian-Canadian writers on their work and the impact on that work of their Ukrainian identity and vice-versa. Contributors include Janice Kulyk Keefer, Erín Mouré (who was also a nominee for this year’s award for her collection of poetry, Kapusta), Elizabeth Bachinsky, Myrna Kostash, Marsha Forchuk Skrypuch, Marusya Bociurkiw, and Daria Salamon. 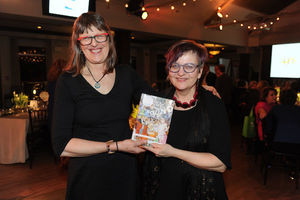 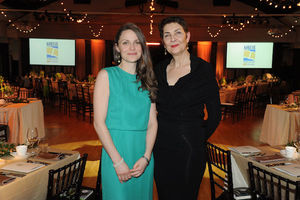 In their citation, jury members Randy Boyagoda, Charlotte Gray CM, and Maurice Mierau, winner of the 2016 Kobzar Literary Award, praised the contributors to the winning book: “their writings are variously brash, contemplative, funny, sad, formal, informal, and highly personal. Taken together, they thoughtfully engage with larger questions and answers about Ukrainian-Canadian experience, and produce a composite picture of an important literary community.”

All photos by Tom Sandler, provided courtesy of The Kobzar Literary Award