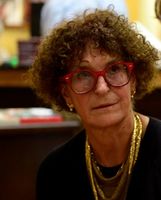 To say that there are a lot of time travel stories is an understatement, but one thing is often starkly missing from those tech- and adventure-focused tales: the social and emotional experience of what it would actually be like to move through time. In Erika Rummel's The Loneliness of the Time Traveller (Inanna Publications), Lynne, who lived and died in 18th century London and found herself given a second chance when she wickedly invades the body of Adele, manages to get herself to 21st century Los Angeles. But all is not well despite Lynne's achievement and her new life of ease: the process has left her emotionally flattened and longing for the passion of her long-lost first life. Now on the hunt for Adele's diary, her only chance to return, Lynne must face her choices and what she's done while deciding what it is she truly wants.

Smart, insightful, and with an eye firmly fixed on the social conventions, both fascinating and humorous, of each historical period, The Loneliness of the Time Traveller is an unexpected and out of the box but essential addition to the genre.

We're excited to speak with Erika today as part of our Long Story series for novelists. She tells us about how the writings of Jane Austen featured amongst her inspirations for the book, why L.A. was the perfect place for her to set the contemporary timeline, and what might be in store for Lynne next. 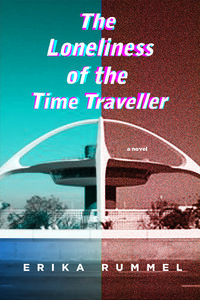 The Loneliness of the Time Traveller is a split time novel, but it didn’t start out that way. It began as a straightforward historical novel, set in 18th century London.

The inspiration was Austen, her wit, her irony, her amusing description of society’s foibles. My heroine, Adele, wrangles with the demands of the marriage market, the unpopularity of intelligent women, AND with Lynne, an unruly incubus who has invaded her mind and body and wants to have a say in everything she does.

So much for the 18th century story – I love writing historical novels, but I also want to comment on our own time. How can I do that without being anachronistic? The answer: by writing a split time novel. And so I made Lynne, the incubus, move on and body-snatch her way from 18th century London to 21st century L.A.

L.A. has become my second home. Twenty years ago I was invited to spend a year as a guest of the Getty Research Institute in L.A.. I fell in love with the city and have been spending winter semesters there ever since. Contrary to its reputation as La La Land, it’s a great place with something for everyone – beach bunnies, movie buffs, and academics alike.

In my novel Lynne is inhabiting the body of a doctoral student at UCLA. She is trying to get her hands on a rare manuscript, the essential tool to channel her next time travel adventure. The book is in the “Clarkson” – in real life, the Clark Memorial Library, where I spent many hours as a researcher. Not that I was trying to steal a manuscript, which is impossible with all the safeguards in place. Of course nothing is impossible in a novel. Lynne just has to work her charm on Sam, the custodian of the library. He knows the electronic code to unlock doors and, as luck would have it, is a professional thief.

My novel originally ended with Lynne deciding to give up time travel because life in contemporary L.A. is good, but now I have other plans for her. The new ending has Lynne turning nostalgic for her first life. She decides to travel back to 18th century London. It’s a first for her. She has always moved forward. Can she reverse time?

Watch for The Loneliness of the Time Traveller: The Sequel. I’ll give you a hint: Lynne is back in 18th century London and hailed by an adoring public as the new star of Drury Lane.

I wrote the 18th century story after I came across a bundle of manuscript letters written by a clergyman, Percival Stockdale (1736-1811). He also published a self-glorifying autobiography, which omits a lot that wasn’t to his credit. Reading his (unpublished) letters I found out what he was really like. I thought this old hypocrite would make a great character in my novel, but then imagination kicked in, and I gave him a rather more “interesting” life than the historical figure had. If the real Stockdale was alive today, he would no doubt sue me for libel.

I included a postscript in which Lynne is enjoying herself in L.A., yet finds that something is missing in her life – passion. That’s the problem with moving from one body to the next, as she did for 200 years. Your emotions flatten out in the process. Lynne is nostalgic for the passion she felt for her first lover and ready to give up the luxuries of L.A. for her first life in London, when she was a poor serving girl in a disreputable alehouse. I leave her with the thought of returning to the 18th century, to a life of passion, but with all the knowledge she has acquired on her time-travels.

Erika Rummel has taught history at the University of Toronto and Wilfrid Laurier University, Waterloo. She divides her time between Toronto and Los Angeles and has lived in villages in Argentina, Romania, and Bulgaria. She has published eight novels and more than a dozen books on social history of the Renaissance. A recipient of international fellowships and literary awards, she was honoured in 2018 with a lifetime achievement award by the Renaissance Society of America.  www.erikarummel.com/

The Loneliness of the Time Traveller

“It is a dreadful thing to be possessed, to be invaded by a spirit woman who commands your body and soul and looks out at the world through your eyes. It happened to me in 1778. Pray it will never happen to you.” Adele’s diary tells the story of her domination by an incubus Lynne, a serving girl in a London ale house who died a violent death and commandeered Adele’s body for eight years. Can Adele be held responsible for Lynne’s crimes? Will the evil spirit return and renew her tyranny over Adele’s mind? Lynne has moved on into the 21st century, but the transmigration has left her emotions flat. Lynne is eager to go back to her first life and experience once more the passion she felt for her lover, Jack. To do so, she needs a channel to the past: the manuscript of Adele’s diary, if only she can find it.

A time-slip novel set in contemporary Los Angeles and 18th century London, The Loneliness of the Time Traveller is a story of love, crime, and adventure combined with fantasy, a little bit of Jane Austen-style irony, and a healthy serving of social criticism.