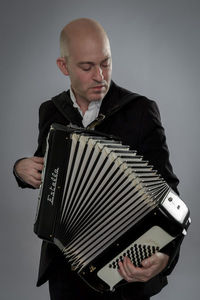 DD has disappeared. The mysterious, charming, mercurial (and fictional) musician is gone and no one knows where, leaving novelist Geoff Berner to search for her and put together everything he can through interviews with her friends, lovers, bandmates, and others who crossed her path. Unfortunately, every account feels both vibrantly true and vastly different. So just who was DD?

Berner's The Fiddler is a Good Woman (Dundurn Press) is an innovative, categorization-resistant novel-as-piecemeal-biography that is part a boozy adventure in following the influence and impact of a complex and gifted musician and part an experiment in capturing love, art, noise, and fun on the page as vibrantly as in the front row of a concert.

A sequel to his Festival Man, The Fiddler is a Good Woman once again puts on display Berner's wit and his empathetic portrayals of the dog-eared glory of the musician lifestyle.

We're pleased to welcome Geoff to Open Book today as part of our In Character series, where we get to know the most memorable characters in CanLit. Geoff tells us all about DD, the challenge of writing a book that is virtually all dialogue, and how his favourite characters are the ones who tell the most interesting lies.

"DD" is the fiddler in the title The Fiddler Is A Good Woman. In the book, different people from DD’s life take turns describing her and telling stories about their time with her. Ex-lovers, ex bandmates, old friends, etc. So you get a lot of different DDs in this book, and you, the reader, have to take in the various portraits and accounts of this person that you haven’t met, and decide what you believe, and what weight you want to assign to each part of each account. Most of these people have very mixed feelings about her, ranging from anger to pity to hero worship, and a bunch of other feelings, too.

Some established facts about her are that she is a professional, touring violinist, she grew up on Vancouver Island, she is of Indigenous heritage, adopted and raised by German Jehovah’s Witnesses, and her romantic relationships are mostly with women.

There’s a kind of magic to music, where people are able transmit feelings to other people via vibrations in the air. When a musician is very adept at transmitting feelings, we have a tendency to magicalize the human being who’s doing that, and understandably so. And maybe all human beings are magical, but there’s good and bad things that happen when a person takes on the role of the magic person in your world, and maybe there’s something reductive and unfair about doing that to somebody. That’s some of the stuff that this book is about.

This is a weird and also boring thing that people like to say. As if writing wasn’t a bunch of letters you arrange with your hands. You’re the writer. You arranged the letters in the pattern they’re in. Nobody fictional took over. Novels aren’t Ouija boards, and Ouija boards aren’t real. I’m responsible for what I wrote, for better or worse. I did my best. I’ll take my own lumps if I got it wrong, not try to fall back on some cheap, easy mysticalization of the writing process.

They’re usually a private joke. But not a pun, or some twee Dickensian name-sounds-like-their-nature baloney.

This book is pretending to be a series of oral depositions about DD. So it’s all dialogue. All of it. That is tricky.

I try to make my dialogue follow the patterns of ordinary speech and all that shit everybody says. But in early drafts, I did notice that my characters were starting to exhibit similar patterns of similar ordinary speech, similar dialogue mannerisms, and I twigged that I was infecting diverse characters with my own particular mannerisms. So I had to go back and do a lot of work on getting the me out of these people’s talking style, and making each voice have aspects that didn’t show up anywhere else. Rhythms, word choices, sentence lengths, and metaphorical systems need to belong solely to the person speaking. Then I ran some of those characters’ chapters by people who shared the character’s background. For instance, I had a Belfast fellow of the same generation vet the dialogue of my Belfast poet.

This kind of writing is a puppet show, and if you’re a good enough puppeteer, you can get the kids to talk back to the puppet and forget about the hand crammed in there. I hope I pulled that off. People are telling me that I did. I hope so. Fingers crossed.

I have a lot in common with DD. For instance, we both had our lives saved by music. And we’ve both nearly destroyed our lives with music a few times, too. That’s probably the key, right there.

My favourite characters are the fabulists. The liars who tell interesting lies, who create a richer world of unlikely possibilities for everyone who hears them talk. I love Odysseus for that. He’s a lying sack of fun, with his “I’m Nobody” routine. I love Ignatius O’Reilly from Confederacy of Dunces. I’m sure that makes me a cliché of a certain kind of guy writer. But I can’t help it. Him and his medieval valve. I love Pippi Longstocking. I recently read Lullabies for Little Criminals by Heather O’Neill and her character Baby pleasantly reminded me of Pippi telling the children that in schools in Brazil, all the kids do is eat candies that are conveyed via a big pipe from the candy factory. Or that a man she knew had such big ears he used them for shelter from the rain. I love the bullshitters.

The third novel in my trilogy about music and musicians. It’s called Blind Minstrels and it’s about the most problematic people in the whole music deal, the singer/songwriters. Are they even musicians?  Why are they so often seemingly useless or helpless as people, and yet so strangely both peripheral and essential to our lives? I’m one of those people. What the hell is wrong with us? I’m going to try to figure all that out, conclusively, so that the issues can be settled for all time.

Geoff Berner is the author of Festival Man and the graphic novel We Are Going To Bremen To Be Musicians. A singer-songwriter and accordion player, he has released six albums and toured in seventeen countries. He lives in Vancouver.

The Fiddler is a Good Woman

A biography that doesn’t quite exist, about a violinist who can’t be found, as told by people who don’t agree on much.

Novelist Geoff Berner has been tasked with writing a biography of DD, a mysterious, charismatic, chimerical musician who has, it seems, dropped off the face of the earth. In the course of his search for DD, Berner interviews her friends, ex-bandmates, ex-lovers, and others. They paint such variable portraits of her that each successive attempt to describe her casts doubt on the previous testimony. As his project is taken over by the lively, infuriating, entertaining tales, a wounded, gifted, and complex DD starts to emerge from all the eyewitness accounts and swear-to-God true stories.

Who is DD? Where did she go? And why didn’t that book get written? Travel through a world of knockabout musicians and chancers, on the trail of an inimitable artist who truly lives in the moment, for better or worse.