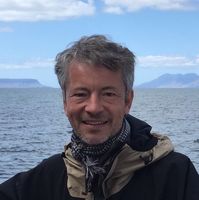 Philipp Schott's The Willow Wren (ECW Press) follows the complex and harrowing story of Ludwig, a child growing up in Hilter's Germany. Sent against his will to a Hitler Youth Camp, shy and gentle Ludwig is a target for bullies and constantly singled out. As the end of the war approaches, Ludwig's true believer Nazi father, is presumed dead, and his mother descends into depression. At just 11, he is suddenly responsible for his family, including three younger siblings, as the brutal conditions of Russian occupation set in. Facing starvation, the young boy leads his ailing mother and his young charges on a chancy escape to the west.

Based on Schott's own father's life, The Willow Wren is a powerful tale of resilience, hope, and one of the darkest periods of history seen through the eyes of a child.

Given the book's focus on Ludwig and his indomitable spirit, it makes sense that we're speaking with Philipp today via our In Character interview, where we dive deep into an author's construction of the people in their pages. He tells us about how he once saw his heroic father as "least cool dad in Saskatoon", how Ludwig as a character attempted to take control of the book, and "invisible scaffolding" great world building creates in fiction.

Tell us about the main character in your new work.

Ludwig is my father, or at least how I picture my father was as a boy. The Willow Wren is his first-person account, as imagined by me, of growing up in Nazi Germany through the terrible war and its aftermath.

He always seemed like the least cool dad in Saskatoon when I was a kid, but he had all these incredible stories of his childhood that I only half paid attention to. It was only much later, after he died, that I slowly came to realize that the aspects of his personality that made him odd and uncool where also likely the aspects that allowed him to survive everything he went through. Then, when I had my own children and both were diagnosed as being on the autism spectrum, I had one of those lightbulb moments that illuminated my father’s life. Suddenly I knew who the Ludwig in this story was going to be.

Ludwig is quiet and introverted, yet also proud, sometimes to the edge of arrogance. He’s usually the smartest person in the room, and he knows it. He has a lot of arcane knowledge from constant reading and he has deep connection with nature. This serves him well, especially after Germany collapses and starvation threatens. It also sets him apart from the other boys, and, in combination with small stature, makes him the target of bullies in the Hitler Youth.

Ludwig has an interesting and complex relationship with his parents. He is both frightened and bewildered by his father, a high-ranking Nazi official. He is much closer to his mother but becomes frustrated with her as she descends into depression.

Yes, I completely agree! I frequently had to wrest control back from Ludwig. This was especially true with this book because it is an imagined memoir, so he should somewhat be in control. However, as the person who imagined the shape of this story in the first place, I had to place boundaries on where Ludwig could take it. There would have been a lot more trivia about trees, mushrooms, and birds if he had been fully in charge. The fact that Ludwig is my father also makes for an interesting dynamic in that tug-of-war for control!

Most of the characters are real people. Ludwig is my father’s actual name, but I felt it best to change everyone else’s names. For the rest of the family, I picked family names from a few generations further back, and for everyone else they were just the first German names that popped into my head. This meant that on a couple occasions I used the same name twice, which I had to sort out in the editing process.

Both my books, The Accidental Veterinarian and The Willow Wren, are written in first person, so I suppose you could say that I gravitate to that, but it’s a coincidence as both happen to be memoirs of sorts, one real and one imagined. That said, I do like inhabiting one character and thus being able to apply maximum subjectivity to the events and the world. It feels so much more immediate and colourful that way. I am, however, looking forward to trying out the more god-like perspective of third person.

Being family, very well! However, I did have to try to imagine them the way they were twenty years before I was born, so I extrapolated from what I knew. This was difficult with my grandfather though because the hardcore Nazi he was at that time is nothing like the gentle Opa I knew as a child. I know invented characters quite well too, and I think it is important that I do. I admire J.K. Rowling for having apparently created fully fleshed back stories for characters that are only mentioned once in passing. I think this is helpful in world building as the invisible scaffolding is still sensed by the reader.

This is going to mark me out as a geek (if the Rowling reference didn’t already do so), but I’m first going to mention Frodo Baggins. In fact, there are some broad similarities to Ludwig in this book as both are small, underestimated, seen as a little odd, and undertake what appears to be an impossible task. I will also mention Briony in Ian McEwan’s Atonement, as no character has made my heart break as much, and Christopher in The Curious Incident of the Dog in the Nighttime by Mark Haddon for providing such a vivid first-person viewpoint from somebody wired so differently. And finally, Gustad in Rohinton Mistry’s Such A Long Journey. There was something very poignant in how his basic decency and desire to do good was thwarted by circumstance and his own blind spots.

Several things. A sequel to The Accidental Veterinarian called How to Examine a Wolverine will be published by ECW this fall, and then my first mystery novel, Fifty-Four Pigs will be out in the spring of 2022. It features a veterinarian in an imaginary Manitoba small town who stumbles upon unusual crimes. The vibe is more Alexander McCall Smith or Tony Hillerman than James Ellroy or Stieg Larsson. I’m also currently writing stories for a third veterinary collection, tentatively titled The Battle Cry of the Siamese Kitten, and I’ve started work on a second mystery, Six Ostriches. And as if that isn’t enough, in my head I’m sketching out a fantasy-tinged epic set in a hidden parallel city deep underneath Winnipeg.

Bestselling author of The Accidental Veterinarian, Philipp Schott was born in Germany but grew up in Saskatoon. He now lives in Winnipeg where he practises veterinary medicine, writes, and shares an old house on the river with his wife, two teenagers, three cats, and a dog.

The touching and nuanced portrait of the rise and fall of Nazi Germany through the eyes of a resourceful German boy.

Ludwig is an odd and introverted child, growing up in Hitler’s Germany. While Ludwig’s father, Wilhelm, is a senior Nazi and a true believer, Ludwig escapes the unfolding catastrophe by withdrawing into nature and books. Eventually, when the Allied bombing campaign intensifies, Ludwig is sent to a Hitler Youth camp, where his oddness makes him a target for bullying.

As the war turns against Germany, the Hitler Youth camp becomes ever more severe and militaristic, and the atmosphere spirals towards chaos. After the Nazis abandon the camp, Ludwig returns home, and his father is presumed dead. With Ludwig’s mother descending into depression, the 11-year-old bears increasing responsibility for the survival of the family as starvation sets in under Russian occupation. Soon, it will be impossible to leave the Russian zone, so Ludwig decides that he must rally his despondent mother and lead her and his three younger siblings in an escape attempt to the west.

Based on a true story, The Willow Wren is a unique, touching exploration of extremism, resilience, and the triumph of the small.