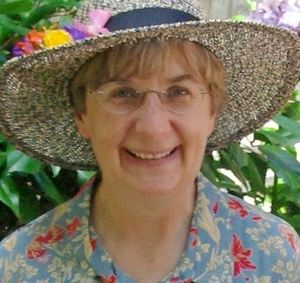 Best friends Charlotte and Dawn are 13 in 1970 and not happy about it, longing to skip past the awkwardness of their early teen years and join the larger world - including the excitement of the hippie movement, its music and culture.

But when a Texan draft dodger arrives in Charlotte's house, taken in by her Quaker family, the complications of adolescence get a lot more complicated.

Charlotte's story is told in decorated children's author Sarah Ellis's Dodger Boy (Groundwood Books), exploring themes of social change, coming of age, and self-discovery. With more than twenty books under her belt and numerous awards, Ellis isn't slowing down, bringing her trademark keen eye and creativity to Dodger Boy to the delight of readers.

We're excited to welcome her to Open Book today to talk about the fascinating cast of characters in Dodger Boy as part of our In Character interview series. She tells us about the "useful illusion" of characters coming to life, sings the praises of the third person point of view, and teaches us how to pack a paragraph into three words of dialogue.

Characters taking on a life of their own is a total illusion but it’s a useful illusion that feels completely convincing in the moment. Example:  In the early stages of Dodger Boy whenever I told anybody the basic premise (U.S. draft dodger comes to stay with Charlotte’s family in Vancouver in 1970) they would inevitably predict that Charlotte would get a crush on the dodger. So I tried to make that happen. But whenever I got into that territory the whole thing went slack and Charlotte just gave me a withering look and refused to play. When I finally figured out what Tom Ed’s effect on Charlotte really was she gave a big sigh of relief and looked up at me and said, “Well. Duh. Finally.”

How do you choose names for your characters.

Charlotte’s best friend is called Dawn. I picked that name because I wanted to signal that Dawn is cooler and more stylish than Charlotte. But then one of my early readers made the good point that it was an unlikely name choice for Croatian immigrant parents. So then I realized that Dawn must have re-named herself at some point, which revealed something to me about her double helping of self-esteem. So what’s her real name?  That question led me to the internet where I searched “Croatian name, female” until I came across the delicious name of Daliborka. Naming characters is 78% of the fun of creating them.

I’m very attracted to close third person point of view. It feels as though you get the focus and intimacy of first person without its potential claustrophobia and icky confessional tone. Also, with third there’s always a faint whiff of a storyteller somewhere in the background. If you’re careful to keep that storyteller in her place you can achieve a kind of stereo effect that I think adds depth and perspective. I hope that Charlotte comes across as a convincing thirteen year old girl in 1970 but she’s not the only voice in the narrative room.

Spoken language is slippery. In fiction there is always a tension between what’s said and what’s unsaid. The challenge and pleasure of writing dialogue is to play with that tension. Using all available tools the trick is to set up the scene so that the reader hears the dialogue with all its undercurrents, preferably without too many signifying adverbs (she said sardonically.)  Example: Early in my novel, Dawn says to Charlotte, “You’re always judging.” What? Has Dawn suddenly become a universally-accepting zen sort of person? Not at all. What she is really saying is, “I’m feeling ill-at-ease in this situation. I don’t really want to ally myself with you at this moment because I’m embarrassed by the way we look in our tie-eyed outfits, (such a mistake!). Furthermore our established pattern of friendship doesn’t fit me any more and I feel guilty about that and I hate feeling guilty so it makes me impatient and borderline mean.”

Three words can only mean all that if I’ve set it up in the previous scenes.

Elsie Fisher from the movie Eighth Grade would make the perfect Charlotte. But I’ll bet she’s pretty booked up, given her fabulous performance.

Sarah Ellis is a celebrated author, teacher, and children’s literature expert. She has written more than twenty books across the genres, and her books have been translated into French, Spanish, Danish, Chinese, and Japanese. She has won the Governor General’s Literary Award (Pick-Up Sticks), the TD Canadian Children’s Literature Award (Odd Man Out) and the Sheila Egoff Award. Her first novel, The Baby Project, remains a children’s classic, still in print more than thirty years after publication. Sarah is a masthead reviewer for the Horn Book Magazine, and she is a former faculty member at Vermont College of Fine Arts.

In 1970 Vancouver, thirteen-year-old Charlotte and her best friend, Dawn, are keen to avoid the pitfalls of adolescence. Couldn’t they just skip teenhood altogether, along with its annoying behaviors – showing off just because you have a boyfriend, obsessing about marriage and a ring and matching dining-room furniture? Couldn’t one just learn about life from Jane Austen and spend the days eating breakfast at noon, watching “People in Conflict,” and thrift-store shopping for cool castoffs to tie-dye for the upcoming outdoor hippie music festival?

But life becomes more complicated when the girls meet a Texan draft dodger who comes to live with Charlotte’s Quaker family. Tom Ed expands Charlotte’s horizons as they discuss everything from war to civil disobedience to women’s liberation. Grappling with exhilarating and disturbing new ideas, faced with a censorship challenge to her beloved English teacher and trying to decode the charismatic draft dodger himself, Charlotte finds it harder and harder to stick to her unteen philosophy, and to see eye to eye with Dawn.