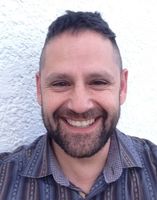 Neal McLeod is one of the busiest writers around, and he has a lot to show for it. An award-winning poet, an acclaimed author of literary theory, an artist, and a prose writer, his newest offering is Neechie Hustle (Kegedonce Press). A rollicking, satirical story told with wit and empathy and packed with irresistible characters, the novel is set on the fictitious Broken Elbow First Nation in Saskatchewan. The narrator of the tale is a character known as the Senator, and we speak to Neal today about the Senator as part of our In Character series where we dig into particularly fascinating characters.

We're also incredibly excited to announce that Neal will be our July 2017 writer-in-residence here at Open Book, which means you can visit the site to hear from him directly throughout the month! Don't miss his posts on our writer-in-residence page, starting in July.

Neal tells us about the Senator's unique humour and rhythm, how he had the chance to get deeply into his character in a unique way, and why science fiction and speculative writing is the next thing on the horizon for him.

My new book is called Neechie Hustle, and the main character is called the Senator. The Senator is based on some of the older Cree people that I grew up with. These older Cree people, and indeed the Senator, had a great sense of humour, and had a different rhythm than many others when they spoke English. The Senator struggles against a system that is stacked against him, yet somehow he finds his place in the world. He works against the restrictions of the Indian Act and the pass system to explore the wider world. For the Senator, stories are the source of all of his knowing, and he often gets caught up in the storytelling.

Yes, I agree with this statement. I began writing Neechie Hustle in 2000. It took a great deal of time to work on it. The character of the Senator developed organically, and went through many layers, like the skin of a tree. There were long periods where the manuscript sat in little boxes of paper, and I did not work on it. I also played the Senator during the days of the Crow Hop Café and CBC radio skits. I got to know the character, not just by writing him, but by actually being him – by embodying him, by forming his sound through my mouth, and by moving his being through my actions.

I draw upon the nicknames that Cree people give each other, both in English and in Cree. Over time, I find that some of the names change, and I develop a fondness for a new name. Perhaps that new name fits a developed part of the novel in a way that the previous name did not. I think that over time you get to see if the name fits the character, and if it suits the dialogue that the character finds themes being formed in.

The key is to hear their voice, their patterns, their play of words…once you know their voice the rest flows easily. The Senator has the speech patterns of some of the older Cree people that I grew up with. Once you have the voice, the pattern of sound of your character in your mind, it is easy to sculpt the wonder of a dialogue once you have the narrative context, the story landscape if you will, to work from and to work within.

The advice that I would give to aspiring and emerging writers is to work on developing one’s characters. Once you have these characters well-developed, the dialogue flows easier. I would recommend doing character histories and profiles, and write out as many details as you can about the characters. Get to know your characters, and then when you develop dialogue, you can imagine the voice and the cadence that the character would use. I think the character based approach stems from my time writing and performing comedy with the Fair-Skinned Indians and the Bionic Bannock Boys.

The Senator and I both have a love of nêhiyawêwin (Cree language) and also oral stories. The Senator is always thinking and being aware of how events could be woven into character; he is from another generation of Cree people. However, like the Senator, I am always thinking about the space between Cree society and the English world. I also think about the funny things that occur between the languages and cultures when they don't completely line up. Things get lost in translation.

I think the one thing that is different between myself and the character is I am half-European (Swedish) and that I also speak another European language (Swedish). Also, I grew up in a later time period than the character – a time where the Indian Act was not as stifling. I also lived in Sweden when I was very young and went to art school there.

Josef K. in The Trial has always intrigued me. Not to sound like a nerd, but I read the book in Swedish when I was a teenager: I am half Swedish, and I especially love modern Swedish poetry. I always found that the endless bureaucracy that K. has to encounter very similar to the bureaucracy that many Cree people endure through the machinery of the Indian Act.

Another character that has left an indelible print on me is the character of Ayâs. I have “read” him in various books including that of Tomson Highway, but I have also “heard” Ayâs through the oral storytelling of Louis Bird. There is an epic sweep to the narrative of Ayâs – something primordial about this quest to find his place in the world, and to try to return home after being in exile. The story is rich in imagery, dialogue, and character. I am deeply moved by the characters in these old Cree stories, and I also see something similar in the Old Norse sagas of my Scandinavian ancestors.

I am also working on a collection of science fiction and speculative stories. It is building upon the collection that I edited for Theytus Books earlier this year. This one, however, is my own writing. I want to explore the genre of science fiction and speculative storytelling, which has not often been explored by Indigenous writers. However, I think that this genre is at the root of many of our old stories.

The anthology that I am working on imagines and envisions other paths of histories and other trajectories of being and possibility. I think that science fiction and speculative storytelling can offer a very powerful critique of societal structures and inequities. From an Indigenous perspective, I think that writing in this genre could offer insights, interpretations and embodied remembrance of Canada. This is especially true in the 150th year of Canadian Confederation.

Neal McLeod is Cree (having grown up on the James Smith reserve in Saskatchewan) and Swedish. He studied at the Swedish Art Academy at Umeå. Neal has exhibited his art work throughout Canada including the 2005 exhibition au fil de mes jours (in my lifetime) at Le Musée National des Beaux-arts du Quebec which was remounted at the Museum of Civilization in 2007. Neal’s first book of poetry entitled Songs to Kill a Wîhtikow, was nominated for several Saskatchewan book awards including Book of the Year in 2005.  It was nominated for Book of the Year at the Anskohk Aboriginal Literature Awards, and won the Poetry Book of the Year by unanimous decision of the jurors.

In 2007 Cree Narrative Memory was published, which was nominated for book of the year at the Anskohk Aboriginal Literature Awards. In the fall of 2008, he published his second book of poetry entitled Gabriel’s Beach. He also recently published Indigenous Poetics in Canada (Wilfrid Laurier University Press) for which he received the Gabrielle Roy Prize for literary theory and criticism. The following books by Neal McLeod are available: mitêwâcimowina: Indigenous Science Fiction and Speculative Storytelling (Theytus Books), 100 Days of Cree (University of Regina Press), and cîhcêwêsin: new poetry from indigenous saskatchewan (Hagios Press). He is also working on: the life story of Noel Starblanket (Cree leader), a book of poetry called The Book of Ayâs, a retranslation of Plains Cree Texts, and a history of the Piapot Cree First Nation. Neal currently lives in Kinistino, Saskatchewan.

Neechie Hustle takes place largely on the fictitious Broken Elbow First Nation in Saskatchewan. The novel provides a satirical look at the Indian Act and also looks at the emergence of neechie swagger of the late 1960s and 1970s. The rise of Pinokineechie, a wooden Indian, sees the expansion of Chief’s Fried Chicken, with Crees dancing at Studio 54. The Senator, who narrates the story, helps bring balance back to the bannock force and to the Broken Elbow reserve.