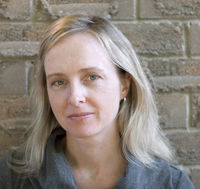 Tournament Trouble (Annick Press) is the first book in the Cross Ups series from teacher and author Sylv Chiang (illustrations by Connie Choi). Perfect for video game obsessed middle grade readers, it tells the story of 12-year old Jaden, who's determined to become the best at Cross Ups, a new video game.

Jaden's mom however, has a different view of gaming, and forbids Jaden from playing, fearing it will make him violent. But Jaden keeps practicing in secret and soon lands an invitation to a huge tournament. He and his friends hatch a plan to get there, and the adventure that follows rivals their on-screen adventures.

We're excited to welcome Sylv to Open Book today, in celebration of the publication of Tournament Trouble. The novel is her first book, but she's got lots more planned for the Cross Ups series, including the next instalment which will be published in Fall 2018.

Sylv talks to us about Jaden as part of our In Character series. She tells us about the feeling of characters taking on a life of their own, why letting Jaden tell his own story was an important part of the editorial process, and why it was so important to write a book that would appeal to the students in her classes who love video games.

Jaden is a 12-year old gamer who can own anyone at Cross Ups, his favourite video game. But in real life he’s not so confident. He has trouble speaking up for himself and can’t figure out what to say to his friend Cali, who’s going through tough times. Jaden wishes he could be like his character in the game—a strong, confident fighter who can transform into a dragon and breathe fire.

My characters definitely take on a life of their own. But that’s the fun part! My favourite writing moments happen when a character surprises me by doing something I totally wasn’t expecting. After writing one scene for Tournament Trouble, I was so shocked that I wanted to call someone and say, “You won’t believe what Jaden’s mom just said!”

I could probably spend all day pondering names and their meanings, but then I’d never get any writing done. Sometimes I just pick a name fast, to get the story moving. I tell myself it’s only a placeholder until I think of a better name, but I rarely go back and change it. I’m a teacher, and people sometimes think I get names from my classes. Not true. In fact, I hadn’t taught any Jadens yet when I started writing Tournament Trouble. Strangely, now I teach an abundance of Jadens.

Tournament Trouble was originally written in third person. Then I started writing a totally different novel as a dual narrative in first person. I loved how the characters voices stood out so distinctly. When early readers of Tournament Trouble commented on not feeling connected to Jaden, I knew I needed to change the POV. Letting Jaden tell his own story got me deeper into his thinking and amped up his voice. I’m really glad I made the change.

I started Tournament Trouble to appeal to the kids in my classes, mainly boys, who spend all their free time playing video games; the ones who aren’t interested in reading. That’s definitely not like me! Jaden is a composite of many of those students because I wanted them to see themselves in the pages. We do share one character trait. Like Jaden, I have trouble figuring out the right thing to say in difficult situations—I prefer to write things down, so I can shape and mold the words until I’m happy with them.

When I was young I loved Trixie Belden. Those books were my great escape. She lived a life so different from mine in the country with three brothers (I was an only child in the suburbs). She was always riding horses with her friend, Honey, and solving crimes. More recently I was impressed by Katniss Everdeen from the Hunger Games series. She’s a fierce, intelligent hero.

Sylv Chiang grew up in Toronto. She studied French at the University of Toronto, and since all her past jobs had involved teaching kids, the obvious path was to become a French teacher. She has taught French Immersion, Extended French, and Core French in the Toronto District School Board. Tournament Trouble (Annick Press), the first book in the Cross Ups series, was written to appeal to the students in her Grade 5 class who are more interested in video games than books.

Sylv’s favorite part of being an author is when her characters surprise her by doing something she wasn’t expecting. She loves the cast of characters in Cross Ups and looks forward to spending time with them while writing further books in the series. When she’s not writing, you can find Sylv on her yoga mat or at the library helping her daughters discover great books.

An exciting new middle reader series from a debut author.

All twelve-year-old Jaden wants to do is be the best at Cross Ups, the video game he and his friends can’t stop playing. He knows he could be—if only he didn’t have to hide his gaming from his mom, who’s convinced it will make him violent. After an epic match leads to an invitation to play in a top tournament, Jaden and his friends Devesh and Hugh hatch a plan to get him there. But Jaden’s strict parents and annoying siblings, not to mention a couple of bullies and his confusing feelings for his next-door neighbor Cali, keep getting in the way!

Tournament Trouble marks the first book in a planned series by Sylv Chiang, a captivating new voice in middle reader fiction. With sharp dialogue and relatable characters, it chronicles the ups and downs of middle school with a relevant, contemporary twist. Accompanied by Connie Choi’s lively illustrations, Tournament Trouble invites readers into Jaden’s world, and will leave them eagerly awaiting his next adventure.