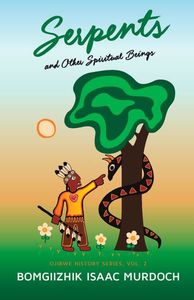 Ojibwe storyteller Bomgiizhik Isaac Murdoch's Serpents and Other Spiritual Beings (Kegedonce Press) is the second in Kegedonce Press's Ojibwe History Series, following The Trail of Nenaboozhoo and Other Creation Stories (2019). The book capture Bomgiizhik's traditional oral stories on the page, allowing readers to feel they're truly present with him. The stories appear in both Anishinaabemowin and English, with translations by Patricia BigGeorge.

Patricia Campbell, Marketing Coordinator of Kegedonce Press, recently spoke with Bomgiizhik about the book and the weight of storytelling. They've shared not only an excerpt from Serpents and Other Spiritual Beings but also what Bomgiizhik had to say about earning and "feasting" the stories:

“As a storyteller," Bomgiizhik told Campbell, "a lot of the stories, they’re earned. They’re not given to you freely. So you have to show mature behaviour, you have to follow the red path, you have to be able to demonstrate integrity and respect amongst your people.

"And often times a payment is made for the story. So a gift would be made for that knowledge. When you’re fasting and when you’re attending ceremonies and those types of things, then you’re proving yourself to be able to carry those stories for the people. So that’s all part of understanding the story.

This excerpt is presented in both Anishinaabemowin (first) and English (below), courtesy of Kegedonce Press. In this story, Bomgiizhik shares the tale of a remarkable boy who dreams of the future.

Excerpt from Serpents and Other Spiritual Beings by Bomgiizhik Isaac Murdoch: 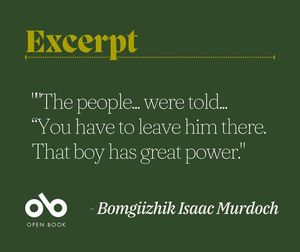 They say that years ago there was a young boy, little Anishinaabe, they went to go put him on a sacred fast, a vision quest, at a place called Shkoodeyiing, the Place of Fire is what that island is called. They put him out to fast there so that he could get his vision and get his power.

During his fast, something happened. The people that were going to put him out were told spiritually by something, “You have to leave him there. That boy has great power, and he can make his way back. Don’t go get him.”

So that little boy, he’s only like twelve years old, was left on that island, Shkoodeyiing, by himself! They were told not to go back and get him. So, he sat there day after day after day. No food, no water, nothing. He was just instructed to pray for his vision so that’s what he did.

Finally, he got so thirsty and dehydrated, his face just sucked right in! He was ready to do whatever he could to get off the island. They say that he got up and left his spot, because he knew something was wrong.

He walked to the shoreline looking at the mainland, just staring at it wondering why his people left. So, he spent the night there, there’s a little beach there. I have been there (no I wasn’t the little boy), I went there because I was fascinated by the story.

The little boy goes to the beach, he sleeps on the beach. That night he had a dream. Not only a dream but he had a prophecy of what was going to happen, onwaachigewin, he’s seen the future in his dream.

All of a sudden a little black snake emerged, and that snake told him: “When you wake up in the morning, I want you to come look in the sand. Put some tobacco there.”

“Where you put the tobacco, I’ll come for it. You will see the sand start turning around, and I’ll see you there.” The boy just woke up and of course the sun was just coming up, that’s a very powerful time of the day.

The sun was just coming up and right away he started to look in that sand. He put asemaa there, his tobacco, just like he was instructed in the dream. He sat there for a long time and stared at that sand. Nothing happened. It didn’t start to twirl around like he thought. So, he closed his eyes and he spoke to that ground underneath. He said “I’m here! I’m the little boy you spoke to last night. I’m here! I’m going to die here; I need your help. Please come to me!”

So that’s what the boy did. He started to pray, and pray, and pray for his people, for the hard times that were going to come. That Serpent started to grow, it got real big! He didn’t even know how big it was because his eyes were closed, but when he opened his eyes there was a great big serpent laying on the beach, forty feet long, great big horns!

Those horns are very powerful, they represent knowledge. That serpent looked at that boy and said, “I’m very proud of you. I will take you back home. Jump onto my back, hold onto my horns! I’ll take you across to Neyaashiing, the point.”

The little boy jumped onto the Serpent’s back, held onto those horns, and the Serpent took him across to Neyaashiing. It dropped the boy off and said, “I’m Ginebig, I’m the snake. I am the guardian of these waters. When you gave me your tobacco it made me feel good. Always know that I’m here, always know that I’m watching.”

Bomgiizhik (Isaac Murdoch) is from Nimkii Aazhibikoong First Nation. He is of the Fish Clan and is Ojibwe. He has four beautiful children. He currently lives in the forest at Nimkii Aazhibikoong, an Indigenous community that focuses on Indigenous language, art, and land based activities. Being blessed with the opportunity, Bomgiizhik grew up in the traditional setting of hunting and gathering on the land. Having spent many years learning from Elders, he spends a lot of his time as a Story Teller. Many of these stories become his visual art pieces which have become recognized world wide. Bomgiizhik is also a Singer Song Writer who loves to make music when ever he gets a chance. You will often find him on the land looking at his favourite plants or gazing into the beautiful night sky.

Serpents and Other Spiritual Beings is a collection of traditional Ojibwe/Anishinaabe stories transcribed directly from Murdoch’s oral storytelling, preserving the style and rhythm of the storyteller’s voice. These are stories of tradition, history, morality and object lessons, involving powerful spirit-beings in Serpent form. All of the stories appear in both English and Anishinaabemowin, with translations by Patricia BigGeorge. Murdoch’s traditional-style Ojibwe artwork provides beautiful illustrations throughout. Serpents and Other Spiritual Beings is the second book in the Ojibwe History Series by renowned Ojibwe storyteller Bomgiizhik Isaac Murdoch. Volume 1,The Trail of Nenaboozhoo and Other Creation Stories (2019), has been one of our best selling titles.