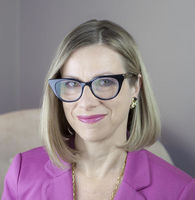 Called "gripping" and "compassionate" by Wayson Choy, it's a powerful debut that digs into the bigotry and divisions of early Toronto, as well as the bonds of family, memory, and trauma. Joseph is a vibrant, memorable character, and readers will fall in love with him as he struggles to find himself in a tough environment, discovering his artistic talent along the way. We were excited to invite Robin to respond to our In Character interview to let us get to know Joseph, and the other memorable characters in The Shining Fragments, a little better.

She tells us about a character 'cartwheeling' into the writing process, cutting 100 pages of written text during revisions, and finally getting to take a magical trip to Joseph's homeland.

Joseph Conlon comes to Canada from Ireland in 1882. He arrives in Toronto an orphan, abandoned at Union Station. Joseph is taken to an orphanage beyond Toronto’s West End where he connects with several characters but takes particular interest in a girl who’s a few years older. Her name is Deary Avery. He becomes obsessed with her, in part, as a way of coping with his own past: pieces he remembers, pieces he doesn't want to look at, and pieces he is not yet able to fully see. Fear and shame become driving forces.

One of the things I explore in the novel is addiction, and at a time when there wasn't a term for it - no treatment or understanding, as we have today, that addiction is not the mark of a “bad person,” and indeed that it can even be the mark of a spiritual seer or seeker. There is to Joseph, I believe, something of the seeker. Yet, he doesn't fully want to find what it is he’s looking for. It’s that tension between desiring something and being terrified by it. His coming of age in The Shining Fragments, then, is really about coming into the fullness of an emotional experience. It’s difficult for Joseph to feel beyond obsessiveness. He loves to draw and paint, and it's through art that he finds solace, relief, and release.

Some writers feel characters take on a life “of their own” during the writing process. Do you agree with this, or is a writer always in control?

I do believe that characters have their own life, and that it is for the writer to discover them. I view the writing process as one of channeling. I know when a character is seeking to emerge. I usually feel it as divine discontent, with the character knocking at the door of my awareness. I have to open the door! To realize that such a force has arrived in your life is a beautiful experience. Joseph came to me as a boy. He said "take my hand", which I did, and he led me.

I started reading Ulster mythology and researching Joseph’s home parish in County Armagh. I began to write of his childhood and, as I was doing this, the character was becoming more and more clear, as was the character of his mother Nora, his little sister Colleen, and his spirit sister Annie. The process of writing these scenes and seeing them become more and more vivid was extraordinary. Meanwhile, I dreamed myself of going to Northern Ireland. Yet at the time, as a single mother and school teacher, I didn’t know how was going to do it. I held the vision in my mind of the places I was writing about and, sure enough, I was offered a rare trip for work that took me overseas and allowed me to visit County Armagh on the return leg of the journey. At that point, I literally walked into the scenes that I had written back in Toronto. It was magical.

Joseph was always Joseph. As for Deary Avery, that full name came straight out of the blue. She cartwheeled into my mind, just as she did in the narrative of that very first time I ever wrote her into it, with Joseph following along. She was full of fire, and I fell in love with her at first sight! Every character’s arrives with their name and particular energy. It seems to be part of the package.

How well do you “know” your characters? Is it relevant to you to know a lot of information about them that doesn’t appear on the page?

It's important for me to get to know my characters deeply and, yes, absolutely, there are many details about them that do not appear on the page. The novel came into form over the better part of a decade. I would write intensively for six to eight weeks in the summer and then stop for 10 months when I returned to teaching in September. Once the first draft was complete I began reworking the novel’s seven sections, and multiple times. In doing this I built in a lot of detail about the characters. This was ultimately released and, I think, the novel better for it. The final edited manuscript was about 100 pages shorter than the previous version. Still, I feel that the process of fleshing out the characters to that degree gave me better insight into their behaviour than I might have had otherwise.

I regularly asked myself during the drafting process, ‘how plausible is it that this person would really have done this?’ With the character of Joseph I even consulted a specialist in addiction in order to really be sure that the kinds of behaviours he exhibits were as true to life as possible. Understanding what motivates my characters is very important to me. It’s one of the things I love. I think it’s a love that probably goes right back to my early days working as an actress. But in writing fiction I get to play all the parts! I try to inhabit each one just as I would if I were playing them on stage.

I actually have two works in progress on my table right now. The one I’m working on most immediately is non-fiction, a self-help spiritual journey to healing and soul-aligned creativity. Next will be a sequel to The Shining Fragments, which I envision as a multi-generational story.

The sequel will be set primarily in the 1920s. I began preliminary work on it in 2014, but stopped while another book came through me, Birdlight: Freeing Your Authentic Creativity, which came out in 2016. Each book has a gestation period all its own. I realize now I couldn’t  have written the sequel back then.  I had to go through so much myself in order to really qualify to write that book. I don’t view it as a coincidence that I’ve found myself on the path of serving others as a coach in human potential, a healer of sorts, and a mentor. In that journey I’ve learned so much through the people I've encountered and had the privilege of working with. Amazing people. Much that I've learned on my own path will be put to good use in the sequel.

Robin Blackburn McBride is an author, speaker and coach in human potential. For twenty years she taught at Toronto’s Branksome Hall. In 2002 Guernica published a collection of her poetry, In Green. Robin’s eBook, Birdlight: Freeing Your Authentic Creativity, became an Amazon Best Seller in 2016, and has since been released in paperback and as an audio book. The Shining Fragments is her first novel.

The Shining Fragments is a family saga about the Irish in Canada that explores the ramifications of abandonment, obsession, love, memory, and visionary power. Spanning the years 1882-1904, it follows Joseph Conlon from his early childhood in Ulster to his experiences of youth and adulthood as an immigrant. Left behind as a small boy on a Toronto train-station platform like so much forgotten luggage, Joseph grows up in a city bleak with bigotry. He discovers that he has artistic talent and becomes a designer of stained-glass windows. He is haunted by the spirit of his unborn sister, Annie, and the powerful and often conflicting influences of the women in his life. In the end Joseph must come to terms on the same ground where he was abandoned as a child.