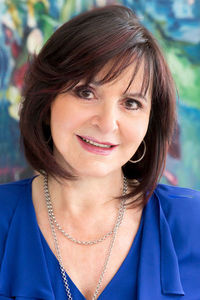 Now living in Montreal, Cathy takes in Angie, the teenage daughter of a friend in crisis. Despite Cathy's good intentions, Angie's presence sets off a series of crises. Turning to what she knows best, Cathy finds a way to use writing, and the village stories of her native Italy, to reach a troubled girl and give voice to the voiceless.

Weaving together stories of organized crime, Canadian politics, and domestic violence, The Women of Saturn is both ambitious and intimate, universal and personal. A story about identity and secrets, it brings three unique and vibrant women to the page.

We're pleased to welcome Connie to Open Book today to talk about Cathy, Angie, and Angie's mother Lucia, as part of our In Character interview series. She tells us about how Cathy's immigrant experience grants her empathy and understanding for the women around her, about shaping characters through dialogue, and she surprises herself with an answer about her reading influences.

Of the three main women characters in my novel, the narrator Cathy, represents the in between Italian Canadian woman who straddles two worlds. She has an Anglo Canadian live-in-boyfriend, but is still tied to her village past both through her childhood memories and through the traditional lifestyle of her immediate family. Her friend Lucia, who was an adult when she immigrated, does not change much after her arrival and withdraws and isolates herself from the world around her, while Lucia’s daughter Angie, born in Canada, is rebellious and rejects conventions. Cathy, who aims on writing their stories,  is a little bit of both and as such is, at times, uncomfortable in her own skin and conflicted over how to live her life. She struggles with body image and insecurities about her writing, but is tenacious about being true to herself. In the end, she must decide between compromising her values for the sake of keeping up appearances and a climb in social circles, or remain alone and keep on searching for inner growth and wholeness.

A writer is always in control, but in the writing process, as story develops and changes, so do characters. The author discovers qualities or flaws in the characters that may differ from the pre-conceived sketches she had drawn originally. At first you imagine some archetypical characters: the submissive women, the rebellious daughter, but then as the story unfolds, its characters become more real in your mind, and you realize that real people are more complex than cardboard characters drawn on paper. I had originally sketched out a Lucia that was a long-suffering Italian woman who sacrifices her dreams for the welfare of her family, but in the end, we learn that she has led a very secretive and self-destructive life because of having succumbed to the life imposed on her. Angie, the rebellious daughter, ends up being more sensitive to her family than what she had appeared at the start. In my first draft, the main character Cathy is a lot more passive, which made her bland and boring. The life decisions that the story throws her way requires more grit and determination from her, and so she changes. I don’t see this as a loss of control. In fact, a writer should always be in control, but should feel free to let go and let characters take on the life that story requires.

I had some difficulty finding different authentic names for all of the many southern Italian characters of my novel. Because of the tradition of naming children after grandparents, the same names go around and round. It was very common in the village to give people nicknames to distinguish them from their family members or from a dozen other Giuseppes and Antonios.  When these people emigrated they generally changed their names to the English counterparts, so Giuseppe becomes Joe, Antonio Tony, Caterina, Cathy. Most of my characters have multiple names. This may create confusion, but it was necessary to do so, not only for the sake of authenticity but also to suggest the split identities that immigrants develop in a new country.

My novel has a lot of dialogue. I find that characters come truly alive through dialogue. Through their speech patterns, choice of words and syntax, we get a better feel of their origins and state of mind. I keep many Italian words in my dialogue, not to be quaint but to be genuine. When we speak English to each other or vice versa, we often fall into using expressions or words whose meaning is fuller in the other language. We often mix dialects, Italian and English, and in Quebec French. Some expressions lose their impact when translated.

The first advice I have for young writers is to be honest in writing dialogue that is grounded in the world in which the characters live. Having said this, it is also important to keep only the most essential parts of conversations, so that the dialogue sparkles. Dialogue can also be used to move the story forward, but it you’re using dialogue to drop information, it must have more of an impact than if you give the same information in expository. Snappy dialogue is also a great way to show confrontation between characters.

This book being part of my first work which I presented as a creative writing thesis, I drew largely from my own personal experiences. Like Cathy, I immigrated as a child and held to my memories of the past. I too felt the pull and push of living in two cultures. In the first chapter Cathy isn’t happy with her reflection in the mirror. She can’t bring herself to move away from it and leave for work. Her clothes, “hug and pull.”  I was married to a non-Italian, though my late husband and I did not have the conflicts that Cathy and her live-in-boyfriend have. But like her, I didn’t always feel comfortable in my body image and had to struggle with insecurities and asserting myself. Cathy is more assertive and has more grit than I would have had at her age. At her same stage in life, while single, I was a bundle of nerves and tried hard not to show it. So, it felt good to give Cathy the qualities that I wished I had developed in my younger days.

In my novel, I refer to the classic Italian novel, I Promessi Sposi by Alessandro Manzoni, which is widely taught in Italian schools. I did read it as a child, but the character that really left an impression on me was not the chaste Lucia, which I parallel to the Lucia of the novel, but a nun, Gertrude, that led a double life. She was forced to become a nun by her family and ends up taking a lover, a petty criminal, while being the abbess of the monastery where Lucia seeks protection. Influenced by her lover, Gertrude colludes with an evil man to double-cross and kidnap Lucia.

In my teen, I was fascinated by the intense Catherine in Wuthering Heights, and later by Connie in Lady Chatterley’s Lover. I didn’t realize until answering this question how fascinated I’ve been to dramatic, passionate, and duplicitous characters, and the similarities with some of the names and characters of my novel. I guess we absorb more than we ever imagine when reading, especially at a younger age.

I have ideas for more works of fiction percolating in my head but nothing that has fully taken any shape yet. Since I love to read the real-life stories of interesting people, a year or so ago, I thought of attempting to write a biography. I have since started writing the story of a well-known musical family of Montreal, but it’s still in its very early stage. I also have a semi-finished children’s book I’d like to put out, as soon as I find the time, and I might also venture into writing a play. Many projects but so little time!

Connie Guzzo-McParland has a Master’s degree in Creative Writing from Concordia University. Her novel, The Girls of Piazza d’Amore, was published in 2013 and shortlisted for the Concordia First Novel Award by the Quebec Writer’s Federation. Since 2000, she has been an active member of the Association of Italian Canadian Writers and its secretary till 2012. Since 2011, she has participated in a reading committee set up by the Istituto Italiano di Cultura in Montreal to award Italy’s Strega Prize. In 2010, together with writer and business partner Michael Mirolla, she took the helm of Guernica Editions filling the role of President and Chief Administrator. She lives in Montreal.

The Women of Saturn

After her childhood friend, Lucia is found beaten, an apparent victim of domestic violence, Cathy, a high school teacher, takes Lucia’s daughter, Angie, into her class and home. This arrangement causes conflict between Cathy, her live-in boyfriend who is involved in federal politics, and her colleagues at school. Revelations of corruption and links to the Montreal Mafia are brought to the attention of the Montreal tabloids by a journalist with whom Cathy has had a problematic relationship since her teens when she solicited his help as a writing mentor. Cathy is determined to help the troubled Angie, and through her connect the village stories of the past with the ongoing drama into a novel, thus giving the silenced women a voice through her writing. This novel is as much about the writing of the immigrant experience as it is about living it.