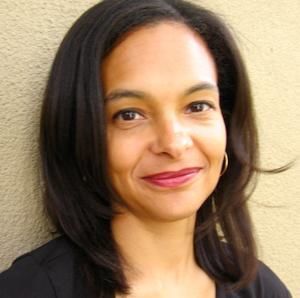 Suzette Mayr's Giller-nominated Monoceros charmed and moved readers across the country upon its publication, so it's no surprise that readers are excited about her new novel, Dr. Edith Vane and the Hares of Crawley Hall (Coach House Books).

The story of the titular professor and the machinations of her colleagues and loved ones would be great storytelling on its own, but this Suzette Mayr, so the creativity is cranked up to 11 and readers get much more than an academic drama. Mix in a sentient university building (with strong ideas about who should occupy it) and its hellish hares, and you get a quirky, bright, wildly fun take on a campus novel.

We're thrilled to welcome Suzette to Open Book to talk about Edith Vane as part of our In Character interview series. She tells us about poor Dr. Vane's Charlie Brown-like luck, the importance of shutting up, and she shares an intriguing one (well, two) word hint about her next project.

Tell us about the main character in your new book

Dr. Edith Vane is a tenured professor of English Literature at the fictional University of Inivea. She’s overly anxious about her job, she’s insecure, she’s desperate for love in a job that treats any kind of personal life as a kind of pathetic self-indulgence. Ultimately, she’s a hyper-loser, Charlie Brown figure who just can’t catch a break no matter how hard she tries. And, it turns out, she is unlucky enough to have her office in Crawley Hall – a sentient, malevolent university building that has decided she is the perfect loser and therefore the perfect prey.

I wish I were a writer whose characters took on lives of their own during the writing process. It would make writing so much easier. I think my process is to most often begin by modeling characters on people I’ve encountered in real life, or by creating characters based on composites of people from real life, and then I toss those characters into “what if” situations that test and transgress my own inhibitions, limitations, and ideas of common sense. What if instead of a character walking around a house-sized sinkhole, the character climbed into the sinkhole instead? What would motivate her to do that? What would she find? What if instead of settling into a predictable old age, a character decided to go over Niagara Falls in a barrel instead? How would she do that? What would be the consequences? I find that in following the “what ifs” I uncover more possibilities, and eventually the characters become more and more unique and less like the original real-life models.

I am a big lover of hardcopy telephone books, baby name books, and of theatre or opera programs with long lists of donor names because of the selection of names these kinds of texts provide. Finding the right name is really important because it can go a long way in establishing characterization. For me, a “Walter” looks and behaves much differently from an “Axel” just because of quality and texture of the sounds, for example, and the history associated with each given name. That said, I am a huge fan of Shirley Jackson’s The Haunting of Hill House, and so for my new novel I cobbled together the name “Edith Vane” as an homage to Eleanor Vance in Hill House, partly because I love that book so much, and because in earlier drafts I borrowed a lot from Eleanor Vance to create Edith Vane, and Edith’s last name for awhile was actually “Vance.” But then really late in the game I found out that Edith Vane is the name of a famous British aristocrat. But that also kind of worked because of the colonial British residue that infuses the University of Inivea in the book, so that was an interesting, happy accident in the writing process.

What is our approach to crafting dialogue, particularly for your main character? Do you have any tips about writing dialogue for aspiring and emerging writers?

I am a big believer in being an eavesdropper and observer – just shutting up and listening to the way people talk, figuring out their speech patterns and tics, and reflecting on how they get information out. You can have five different people, each charged with conveying the same piece of information, but that information will come out much differently depending on the priorities, obsessions, and histories that inform each of these people.

Like my main character, I’m an Associate Professor in a university and I teach in an English Department. But in a way she’s a nightmare version of me in that she’s come to therapy waaaaay too late in life, and she’s made and continues to make really strange choices in terms of career and priorities. For every left that I turned in my life, she’s turned right; for every yoga class or therapy session I’ve gone to or forced myself to go to (I sound so pure!), she’s opted for a glass of wine and a grading all-nighter instead. Not that I haven’t ever made poor or strange choices – I certainly have made and continue to make some questionable choices out of ignorance or stubbornness – but the depth of her misery and lack of confidence, her unwavering faith in the flawed academy, are disturbing to me. She’s a bit of a martyr. I, on the other hand, am a big complainer and tend to dive straight for my pyjamas and a mental health day as soon things start looking tough.

Who are some of the most memorable characters you’ve come across as a reader?

I’d have to say that Marian from Margaret Atwood’s first novel The Edible Woman has always stuck with me. Marian is a woman in her 20s trying to follow the proper script of being a “good girl” and a supportive fiancée for her completely conventional boyfriend, and she’s set up for life in the traditional, heteronormative sense. But her body keeps betraying her, and I love this contradiction that she thinks one way but her body does something completely different. I love her visceral rebellion, the way she decides she’s attracted to the space under the bed when a dinner party gets too tedious and so she hangs out under the bed; how a steak on a plate in front of her suddenly turns into an unappetizing chunk of muscle at a dinner with her muscle-head boyfriend. I remember reading that book in my late teens, when I was figuring out that I was queer but resisting it because I knew that being queer would lead to me living a life for which there was no predictable script. Being queer was clearly much truer and what I desperately wanted, but it also seemed too dangerous, and I would no longer be a “good girl.” Even though Marian is very much a heterosexual character, her discomfort and unease with being a “good girl” and her deciding she’d rather slide under a bed than witness a conversation that disregards her really resonated with me.

Then there’s the main character William Stoner in John Williams’ novel Stoner, which is about a professor who lives a completely boring and predictable, unremarkable life – the kind of life I am terrified I will end up living. But what a terribly interesting, remarkably boring life Stoner has. The end of his life just broke my heart, but also made so much sense.

Fiction writers aren’t supposed to talk about their works in progress because it jinxes the process, but here’s one way of summing it up: Trains. And maybe clarinets.

Dr. Edith Vane and the Hares of Crawley Hall

Dr. Edith Vane, scholar of English literature, is contentedly ensconced at the University of Inivea. Her dissertation on African-Canadian pioneer housewife memoirist Beulah Crump-Withers is about to be published, and her job’s finally safe, if she only can fill out her AAO properly. She’s a little anxious, but a new floral blouse and her therapist's repeated assurance that she is the architect of her own life should fix that. All should be well, really. Except for her broken washing machine, her fickle new girlfriend, her missing friend Coral, her backstabbing fellow professors, a cutthroat new dean – and the fact that the sentient and malevolent Crawley Hall has decided it wants them all out, and the hall and its hellish hares will stop at nothing to get rid of them.

Like an unholy collision of Stoner, The Haunting of Hill House, Charlie Brown, and Alice in Wonderland, this audacious new novel by the Giller Prize–longlisted Suzette Mayr is a satire that takes the hallowed halls of the campus novel in fantastical – and unsettling – directions.