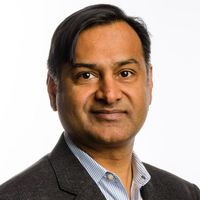 Sam Hiyate has been an influential fixture in the Canadian literary industry for years, first at the literary magazine Blood & Aphorisms and later as the publisher of indie darling Gutter Press.

Now President and CEO of the Rights Factory and one of Canada's leading literary agents, he's seen the publishing industry from all sides. Which makes him the perfect person to pull back the curtain not only to help emerging writers and publishing professional understand the world of books, but also to offer great literary entertainment in the form of The Rights Factory's new podcast, Agent Provocateur.

All of the Rights Factory's agents contribute to the podcast, and it is produced by award winning novelist Andrew Kaufman. Just launched in July 2021, the podcast has already published four episodes, covering topics as diverse as BookTok (the book community on TikTok), wine pairings for reading, and the line between fiction and memoir.

We're excited to welcome Sam to Open book today to talk about Agent Provocateur. He tells us about why Oscar Wilde was one of the main inspirations for the podcast, why "serious" and "funny" are of equal value in great book discussions, and why the podcast is adopting an international focus.

You cite Oscar Wilde as one of the inspirations for the podcast’s name and its perspective. Can you tell us a bit about that connection?

Wilde is a constant inspiration to me personally, and I loved that he was regarded as a provocateur in his lifetime for his take on the values of Victorian society, good and bad. But I also think many writers reach a provocateur status when they have the confidence to go against the grain, and the audience to allow their message to be heard. Remember when Vaclav Havel, a playwright, became post-Communist Czechoslovakia’s first president? Literature has a kind of power.

Why is a podcast the right form for communicating the Rights Factory’s news and vision?

The podcast isn’t really about news from the agency. It’s more about stuff that we as agents and often our writers and friends in the publishing community are seeing and want to discuss in greater depth than say, a blog or social media post – concerns we want to share. Though our goal is to entertain as much as enlighten, so for a podcast we prefer to keep things shorter than longer. Our episodes for season 1 average at 30 mins, though there were a few panel discussions I think could have gone on a bit longer, so maybe we’ll have a few different lengths and formats as we continue into future seasons.

Agents aren’t traditionally known for having an opinion – many choose to comment anonymously on the industry, even if they feel strongly about something. We don’t like the idea of living with that kind, or really, any kind of fear.

In terms of vision, one of the things we decided when we launched was not to have anything on writing mechanics, craft, or etiquette – the topics you see at writers conferences – stuff about writing the perfect query, or how to pitch your book at a cocktail party to leave with a book deal – that sort of thing. I’ve opened up the podcast to everyone in the agency, and my hope is eventually listeners will feel like they know all of us at TRF. Diane Terrana, our executive editor for example, has brilliant opinion pieces, and isn’t afraid to ask tough questions of guests, or to point out that TikTok is a post-literate medium. TRF agents Stacey Kondla and Kathryn Willms, and even our brand manager, Anne Sampson, have all contributed. And our producer, Andrew Kaufman, likes to shape each piece with its own narrative, its own story – that’s his strength as a novelist and radio/podcast guy. It’s been incredibly fun – and a great learning experience working with him on this.

Why do you think the role of the literary agent captures so much interest? How do you view an agent’s role in the literary community?

I’m not sure the role of an agent is that interesting to many people outside of the literary community, where of course it is paramount. Though, I have noticed in the case of fictional agents like Jerry Maguire and Ari on Entourage, that agents can get a lot of love and empathy once one enters into their lives, and sees their struggles. We don’t usually talk about how hard we work for our clients, but you can get a sense from what the fictional agents do.

We are inviting everyone in the community to come and speak their minds, to be both serious and funny – which to most people can seem contradictory, but not us. As much as I would love the industry to love and support us – publicly or privately, at the end of the day if writers learn something more about our work and lives, and if publishing students who listen say, I want to go into books because these guys are having so much fun with it, I’d be happy.

What do you envision or hope for regarding the future of the podcast? Are there particular guests you’d love to have on or topics you’d like to address down the road?

One goal is to make the podcast more international. In the beginning we called on favours of many of our friends just to meet our weekly schedule. So some episodes feel a bit Toronto- or Canadian-centric. Which isn’t a bad thing, as we have a great and unique book market and culture. In episode 4, we have Calvin Reid, senior news editor and graphic novel aficionado at Publishers Weekly on a panel. I’d love to have more New Yorkers, considering that America is the biggest book market in the world.

And I’d like to occasionally focus on what’s happening in the translation markets, and of course what Hollywood is doing with books. So there are a ton of topics for us to explore, and even revisit as things change so quickly these days – between a dystopian pandemic and disruptive entrants like Wattpad, doing some cool things.

I’d like to have more editors and publishers on, because most of the time we hear from them in the media, it’s usually with a business focus, rather than about their taste or aesthetics. Or about bestsellers. And yet most people in publishing aren’t there for the money (though the bestsellers never hurt). I mean, we didn’t become bankers or financial folks. Most of us want to make a difference by bringing exciting new works to market, to launch careers, and then once launched, to not give up on the people we once loved and supported because their books stopped selling – but that’s a much longer story.