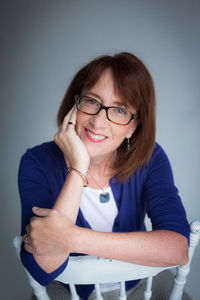 For the women and children at home during the First World War, life was an unpredictable, anxious, and terrifying existence, as they waited for news of their sons, fathers, and husbands and worked to keep going in the face of a war that had seemed, up to that point, unimaginable.

This is where we find Ena Connolly in Valerie Mills-Milde's The Land's Long Reach (Inanna Publications). Newly married and living on a farm in the Bruce Peninsula, Ena is left to find her way through a world changing faster than anyone alive could have predicted. Through her relationships with her sister-in-law Sarah, a talented painter, and her farmhand Blain, she grows and changes, even as violence rages across the ocean - as well as closer to home. It's a vivid, introspective book about a hugely influential period of Canadian history, seen from a rarely-explored perspective.

We welcome Valerie to Open Book today to tell us about Ena and her emotional journey, as part of our In Character series, where we delve deep into the dynamic protagonists who populate CanLit.

Valerie tells us about characters who "wander at night", discusses what she and Ena have (and don't have) in common, and offers some fabulous advice for crafting dialogue and creating memorable, realistic characters.

Tell us about the main character in your book?

Ena Connolly is recently married and living on an Ontario farm when the First World War breaks out. Rural life is new to Ena and we meet her just as she is awakening to the thrill of her first spring on the farm – the prospect of seeding the ground, learning to care for livestock. Ena is an exceptionally gifted woman and deeply private. Community in the sense of extended family does not come easily to her. When the War intrudes on domestic life – hers and so many others -  Ena increasingly relies on her capabilities and talents to hold fast to what matters most to her. At the same time, she must extend herself emotionally in unexpected ways. The narrative tension for Ena is between her faithfulness to others, and her exquisitely personal and self-defined inner life.

Yes, I do feel that characters take on a life of their own. They like to wander at night, visiting me at two in the morning, eager to show me something important about themselves – some fragment of their personality or experience that I haven’t known about before. I think of how a photograph in developer fluid is gradually revealed, the contrasts, the nuances exposed. It’s as if the subject is driving the process and not the photographer. This process of unveiling is why writing many drafts is so important. The characters must take their time to really show themselves and writers must learn to be patient, be attentive, and allow this to happen.

What is your approach to crafting dialogue, particularly for your main character? Do you have any tips about writing dialogue for aspiring or emerging writers?

This particular novel is set early in the twentieth century and in a rural place. I wanted to treat the dialogue with restraint, capturing the tone of the era without the dialogue sounding too contrived. And Ena is not a big talker, although some of the personalities around her are! I kept the dialogue short and simple, and I asked myself, particularly where Ena was concerned, is this honest? I found that having other characters remark about her was helpful in portraying her. The writer should always ask herself, is this dialogue necessary in some way? Does it reveal something important about the character or her relationships? Does it convey some information necessary to the plot? (But be careful with that last one because too much explanation through dialogue can come off as deliberate and a little bit lazy.)

Ena is an extraordinarily talented baker and I am certainly not that! I frequently leave out ingredients, add what I shouldn’t, forget what I’ve mixed-in and what I haven’t. I simply don’t pay attention while Ena is able to focus herself entirely on the task at hand. But Ena is very introverted and I can relate to her in that way. I’m not nearly as sensory as Ena is – I don’t understand the world by relying on touch or smell or sight. My experience comes more through imagery and intuition. Over the course of the novel imagery takes hold in Ena too; Ena forms a very close bond to her sister-in-law who is an artist and I think this connection opens up her imagination and allows her to see more deeply into the world. I think giving Ena such a close relationship to an artist might be my way of leading her along a bit and bringing her out of herself. I appreciate the conflict she feels about belonging to the world and belonging to herself. I think perhaps many writers experience this.

How well do you know your characters? Is it relevant to you to know a lot of information about them that doesn’t appear on the page?

Characters are mannerisms, desires, emotions, needs, experiences, habits, predilections – all jostling and colliding with one another from one scene to the next. That’s what makes characters interesting. Developing a fully-conceived character is very important to creating a convincing piece of fiction. It can be fun to sketch a character, to spend hours describing him or her, constructing a past, thinking of quirks and idiosyncrasies. But hyper-focusing on character can also be a convenient place to park for a while – to settle for describing rather than writing. It’s important not to rely on any one element of character too much. Having a lot of information of a particular kind – about personal history for example – can flatten the character and make him or her predictable. I try to ask myself, is this information necessary in the narrative? Is it important to how the reader will understand the character’s transformation? Is it important to the development of the plot or to the overall themes in the novel?  I also have to remind myself that the character does not operate in a closed system but is greatly influenced by her relationships and by the place and time in which she lives. It matters what happens to the character and how she responds to what happens. Some of that information is delivered through plot and ultimately I remind myself that both plot and character are essential to the narrative!

Valerie Mills-Milde lives, works, and writes in London Ontario. She is the author of the novel After Drowning (2016), which won the IPPY Silver Medal for Contemporary Fiction. Her new novel, The Land’s Long Reach, will be published by Inanna Publications in May 2018. Her short fiction has appeared in numerous Canadian literary magazines. When she is not writing, she is a clinical social worker in private practice.

It is The War to End All Wars, and Ena Connelly, a keenly sensory and extraordinary woman, is newly married and living on an Ontario farm. The shock of violence in far-off battlefields is echoed in a terror much closer to hand. With bold perception and remarkable self-reliance, Ena faces a dramatically altered world. Ena is self-contained, and careful not to reach too far into the turbulent emotional lives of others. As the war progresses, Ena forms a fierce bond of loyalty for Blain, the delightful but (necessarily) duplicitous boy who comes to work for her. Through Blain, she learns to extend herself in unexpected ways— to reach outside of herself, and to risk. Ena also grows closer to her sister-in-law, Sarah, a gifted painter. Sarah is unafraid of confronting emotional turmoil and passion but she doesn’t have Ena's absolute clarity of purpose and aim. Ena helps Sarah move closer to the life she wants, while Sarah opens Ena to a terrible and essential kind of beauty. When studying Sarah’s paintings, Ena comments that it is not the surface that matters, but rather what is underneath. The same is true of this novel — underneath the meticulous detail of daily life is the emotional landscape of persistent, courageous women, watching the violence of war in Europe (World War I) and domestic violence closer to home.