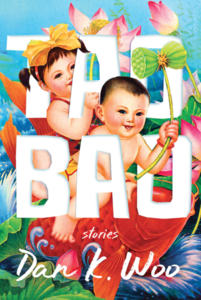 If Amazon has changed modern life in the West, Taobao, China's massive online marketplace (which is owned by e-commerce giant the Alibaba Group), may have changed the Chinese experience even more. So it's fitting that this retail titan provides the through-line to Dan K. Woo's smart and dream-like new story collection, the appropriately titled Taobao (Wolsak & Wynn), filled with characters who are navigating a changing world.

Each story follows young people in China, from the tiniest rural villages to the most advanced, sprawling cities, as they search to define themselves, their desires, and their futures in a rapidly shifting world and in a country upon which numerous assumptions are projected. Complex, thoughtful, and deeply imagined, each story is a little universe stacked side by side—not unlike the uneasily endless possibilities of their titular inspiration.

We're excited to welcome Dan to Open Book today to share, through the lens of our Going Pros & Cons series, his experiences in writing and publishing.

He tells us what it was like to start out searching for blurbs for his first book (Learning How to Love China) in a new and unfamiliar industry, explains how his editorial relationship with acclaimed writer and editor Jen Sookfong Lee became a transformational aspect of his writing life ("When she pays attention to you, you just glow"), and offers his advice, both emotional and practical, to writers setting out to publish.

I didn't really celebrate, but I remember it well. I was in Suzhou, China, when I got an email from Quattro Books, an independent publisher in Toronto, saying they wanted to publish Learning How to Love China. There happened to be a weird atmospheric storm that night, a kind of silent, rolling lightning that went on and on across the entire sky for hours. I went outside for a few minutes. I wanted to go for a celebratory walk, but I didn't get far. The sky was beautiful but scary. 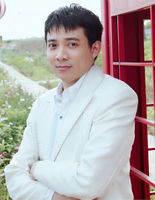 I've only been to a handful of readings, but they had a big impact on my life.

A few months after publishing my first book, I participated in the Draft Reading Series around East Chinatown in Toronto. By chance I bumped into a fellow writer – published by the same publisher that season. His wife asked what I was doing for money and if I had a job.

She introduced me to her supervisor, and I ended up getting a part time teaching job at a college. I loved teaching, but I saw the precarious state of college teaching. I even had a colleague who worked a second job at Walmart greeting customers – the Walmart job meant more to him because of the steady benefits, and he had been doing that for eight years. When the pandemic hit, I researched online technologies because we were shifting online. My employer offered free access to LinkedIn Learning and I used it to study computer technologies and security. A short time later, I applied to a cybersecurity program funded by Ryerson University, RBC, and the Rogers Cybersecure Catalyst.

It was probably a combination of my teaching experience, my writing skills, and my interest in computers that got me into the program. Soon after, I got a full time, permanent job for a major cybersecurity firm. I had gone from jobless and unemployable to working on Bay Street. It wasn't the dream that I started out with, but it is a dream of sorts, and at least now I can support myself.

I never thought that writing would bring so many unexpected rewards. I'm grateful to educators and administrators who are upskilling new generations of artists and writers with real-world, employable skills. Financial independence is an essential right that all artists should strive for, and programs that support this aim are providing a great service to the arts community. Communication, writing, and critical thinking skills have broad applicability, and can open many doors!

The first year I came back from China, I published Learning How to Love China and I wanted a blurb for the back cover. I didn't know much about the industry, and I had never heard of 'CanLit'. I thought getting a blurb would be straightforward. I solicited six different Chinese Canadian writers who I thought would be interested in my book, which was set in China, and which had already won an award. To my surprise they all said no, one after another. I couldn't find a single person willing to even read my book.

I had a lot of difficulties like that. For example, the only person in publishing I knew was a history professor, because I had studied history for my undergraduate degree at University of Toronto. I asked him if he knew anybody, and he put me in touch with an agent. I was hopeful, but the agent also refused to read my book—in fact she told me to post it on Wattpad.

I gave up looking for someone. I stopped for a couple of months. I didn't know about Jen [Sookfong Lee], I didn't know about her friends in Vancouver. I didn't have Twitter or Facebook. Then at the last moment, I stumbled across Jen's website, and I wrote to her. She replied, saying she'd read it. She wrote a blurb for me, which I was so thankful for. A couple months later, she bought Taobao.

I think all writers get discouraged at some point. Whether or not you persevere probably has nothing to do with whether you're a good writer.

I would say, don't bother trying to overcome feelings of being discouraged. If you're feeling like you don't want to write, then don't. Just get on with your life, get a job, have a family, travel, do whatever it is you want to do. The truth is that getting a job, for example, any sort of job, will make you into a better writer, because it'll give you more perspective on life. Eventually you will start writing again when you're ready.

Okay, nobody wants to hear that. So practical advice, a trick I used–go to the library and find some badly written books, preferably in the genre that you like. Read until you find a really bad one, and say to yourself, 'I can do better than that'.

If you've finished your book already, but no publisher will take it, just throw it in the drawer and write a new one. Keep doing that until you find a publisher. This is a tried and tested method, and it's the method I used.

My favourite part of making Taobao was working with my editor, Jen. Because of the pandemic we had some extra time to work on it. It was exciting to see how the stories changed.

When we started, I had just come back to Toronto and won an award, and I thought I was a hotshot writer. I was so shocked when she scribbled all over my manuscripts—I was furious at first, but after a while, everything she said began making sense.

Jen is one of these people you hear about. You want to do everything to make her happy. When she pays attention to you, you just glow, you feel amazing, like she's the sun and stars.

Dan K. Woo's family came to Canada in the 1970s. His grandfather was a fire captain and the first firefighter to die on duty in British Hong Kong, partly a result of the British colonial system. In 2018, Woo won the Ken Klonsky Award for Learning How to Love China (Quattro Books). His writing has appeared in such publications as the South China Morning Post, Quill & Quire and China Daily USA. A Toronto native, he lives with his partner in the city and writes in his free time. He is currently studying at the Rogers Cybersecure Catalyst and SANS Institute.

In twelve spare, fable-like short stories Dan K. Woo introduces us to a fascinating cast of characters from different regions of China. From rural villages to bustling cities, Woo deftly charts the paths of young people searching for love, meaning and happiness in a country that is often misunderstood in North America. Whether they are participating in a marriage market to appease their mother, working as a delivery boy in Beijing or dealing with trauma in a hospital in Shanghai, we see these young people push against both tradition and the lightning-fast economy to try and make their way in often difficult situations. Woo brings remarkable empathy to these dreamlike stories and their twists and turns, which will linger long in readers’ minds.  Through it all, the spectre of Taobao – China’s online retail giant – hovers, providing everything the characters might need or want, while also acting as a thread that ties together a captivating and complex collection of stories set in a captivating and complex country.