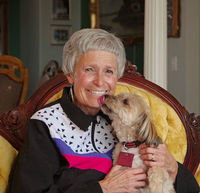 Fran L. Porter's second book and first novel, The Wrong Brother (Crossfield Publishing), tells the story of Marigold Iona Anderson, who comes under the charismatic sway of neurologist Dr. Damien Sparks. Such is Damien's effect on Marigold that even when she suspects he may be a murderer (and she may have even witnessed part of a crime he committed), she can't quite bring herself to believe. She ends up in a relationship with Damien's twin, Desmond, and eventually finds herself re-examining her initial assessment of both brothers. Exploring abuse, belief, and psychological control, The Wrong Brother is a page-turning character drama.

We're pleased to welcome Fran to Open Book today for a discussion of her characters as part of our In Character interview series. She tells us about the incomparable feeling a writer can experience when characters come to life on the page, the benefits and drawbacks of both first- and third-person narrative perspectives, and the one character who rises above all others in her favourite reads.

There are two main characters in The Wrong Brother: my first-person narrator Marigold Iona Anderson and her 'leading man', Adonis-handsome Dr. Damien Sylvester Sparks. Mari is a nineteen-year-old smartass scholar the day she witnesses what she thinks is the precursor scene to a murder. It sets her previously sheltered and naïve world on its ear that she suspects the crime’s perpetrator to be none other than one of the best-looking and most-respected neurologists in town. How the two behave in light of facts concerning the situation that gradually emerge is what comprises the book’s story. Both characters lose their former naïveté and cynicism (contradiction intended!) along the way, and both eventually become examples of courage and heroism.

When characters take on a life of their own, then the author knows he or she has successfully created dynamic people with whom readers can identify and become involved. Lack of caring about what happens to the characters in a story results in loss of interest in the story itself. I, as a writer, frequently experience the 'coming alive' of my characters. Sometimes they want to do or say things I didn’t have in mind for them at all, and my fingers on the computer keys have no choice but to go along! Like the shot-in-the-arm stimulation provided by reality’s unexpected moments, this spontaneous event, when it occurs, can produce in me a gripping excitement. I love it!

My characters often name themselves. But a few can be uncooperative and refuse to tell me their names for quite a while! Straightforward rules like giving 'ordinary' names to 'ordinary' folks or basing a name on some personality trait are too cut-and-dried, in my view. When a character is elusive and won’t reveal his real moniker right away, I’ll choose a 'working name' while I’m writing the story. Ultimately, he’ll 'fess up to his true identity, and that’s when I change it!

During my twenty-five-year career as a teacher of English literature and composition, I spent considerable time and energy discussing point-of-view with my students. In a nutshell, perspective is everything! It determines how the story’s elements are revealed, as well as which of them the author may choose not to reveal. At times I like omniscient point of view, because it gives me a godlike control of everyone’s thoughts and feelings. The longer my story, the more likely I am to use omniscient point of view.

But more frequently my preference is for the first-person format I use in The Wrong Brother, or, alternatively, for a third-person limited omniscient approach. These lead to less cluttered narrative and allow me to focus on the development of one multi-faceted personality whom I come to know intimately from the inside out—because he or she becomes one with me! I get swept into the vicissitudes of that person’s life for the simple reason that, for the duration of my work on the project, I am that person!

Most aspiring writers have heard instructors at courses or workshops say, "Show me, don’t tell me". Dialogue is one of the best 'showing' tools there is! Effective dialogue allows a reader (subconsciously, of course) to assume the role of analyst, to place the story’s characters on a figurative couch and delve into what types of people they are, what makes them tick, and perhaps how they’re likely to conduct themselves in the future. Good dialogue is also a far more interesting way to drive the plot than is mere narrative. Don’t get me wrong. Straight narrative has its place, as does detailed description. Like any craft, the craft of storytelling is mastered by honing one's skills repeatedly and teaching oneself how to achieve that fine literary-technique balance.

To emerging writers, my main advice would be to keep dialogue natural. Ask yourself, 'Is this how people really talk, or do those lines seem stilted?' And, if you want your characters to ring true, make sure everything coming out of their mouths is consistent with what those sorts of individuals would be likely to say. Lastly, don’t have any of your characters run on and on in a preachy fashion (unless you’re intentionally depicting a preachy sort!) or you’ll lose reader interest. Short witty repartee is a sure-fire dialogue winner!

For Mari Anderson, my three main words would be 'cynical', 'sassy', and 'naïve'. Oxymoronic? Yes. But how the story plays out makes the combination of these traits in her abundantly clear. For Dr. Damien Sparks, my three words would be 'understanding', 'tender' and 'astute'. However, the astuteness comes late in the story, threatening to undermine both the understanding and the tenderness. Now, I hope, I have you intrigued!

Ask a former teacher of literature about the gallimaufry of memorable characters she’s encountered in her reading and you might end up with another novel! So I’ll try to keep it much shorter than I’d like to. In the 'don’t-let-this-happen-to-you' category: Othello, King Lear, Captain Ahab, Willy Loman, and yes, even poor old Jay Gatsby. In the 'strong and feisty' category: Jo March, Scarlett O’Hara, Eliza Doolittle, Huck Finn, Harry Potter, Piscine (Life of Pi), and Anne Shirley. In the 'delightfully quirky' category: Sherlock Holmes, Evelyn Couch (Fried Green Tomatoes at the Whistle Stop Café), the Girl with the Dragon tattoo, and Don Tillman (The Rosie Project). In the 'loveable fairytale' category (one I’m now mature enough to cherish once again!): Winnie the Pooh, the Cat in the Hat, the Giving Tree, Charlotte the spider, and Alice—both in Wonderland and Through the Looking Glass. Finally, saving the best for last, there’s Atticus Finch. I put him in a category by himself. I like to think there are elements of him in my Damien Sparks character. Certainly, I see elements of him in the real-life character of my husband! He is truly my hero.

Fran L. Porter has taught English literature and composition (among other subjects) at both the high-school and the university level. She has authored short stories and articles in literary publications, trade journals, and magazines. Proceeds from When the Ship has no Stabilizers, her non-fiction book about her daughter’s suicide, were used to open a treatment clinic in Calgary, Alberta for young people with borderline personality disorder, and resulted in Fran and her husband Andy being named Calgary’s 2017 Philanthropic Family of the Year.

Fran L. Porter’s second book has taken a very different direction from her first. Proceeds from When the Ship has no Stabilizers (Crossfield, 2014), her account of daughter Colleen’s struggle with a mental illness that culminated in suicide, helped open a treatment clinic and led to Fran and husband Andy’s being named Calgary’s 2017 ‘Philanthropic Family of the Year’. “That was a humbling silver lining to a tale with a tragic end,” says Fran. “In real life, of course, a story’s end is beyond our control. But in fiction, the end can be as emotionally fulfilling as both reader and author desire. And who doesn’t desire an emotionally-fulfilling ending?” Her new romantic suspense novel, The Wrong Brother, takes us on a roller-coaster ride that leaves us dizzy by the time it glides to a breathless stop. Gripping danger and all-consuming love combine in its pages to produce an eminently satisfying conclusion.