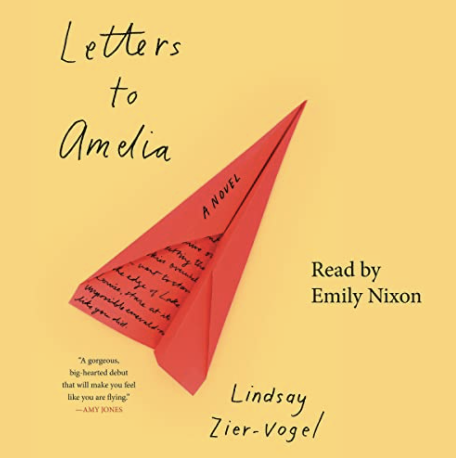 I used to have to walk to get my babies to sleep in the stroller. I would walk and walk until they were asleep, loops of the same block, and then I’d sit on a bench, the one bench in my entire neighbourhood, and pull my book and try to read. But of course, as soon as the stroller wasn’t moving, my baby would wake up, so I never managed to read more than two pages at a time before I’d have to keep pushing the stroller. I started listening to podcasts then, but what I really wanted to do was read.

How I wish I had fallen in love with audiobooks then. It would’ve made those interminable stroller loops around the neighbourhood so much better. All I wanted to do was read and it turns out I could’ve.

It still took me until the pandemic before I fell in love with audiobooks. In the early days of the pandemic, when everything was terrifying and bewildering, I couldn’t bear to listen to the podcasts I always listened to—I didn’t want anyone reflecting on the state of the world because I was barely holding onto my own reality. Enter audiobooks. I got to read while I was baking, and cooking, and walking and washing dishes. I got to be transported, which is all I wanted in those terrible early days of Covid. Audiobooks were an absolute revelation
I worried that it would be too hard to juggle the characters and storylines from the three-dimensional book I was reading, the book I was writing, and an audiobook, (not to mention the TV shows I was watching, hello “Succession”!) but it turns out I can do those things! And after a few 12-hour books, I started listening to them at 1.5 speed, which took a little while to get used to, but now I can’t listen to them at regular speed.

Some recent favourites are: The Second Season by Emily Adrian, Somebody’s Daughter by Ashley C. Ford (she narrates it herself and it is SO good!), Detransition, Baby by Torrey Peters, Hamnet by Maggie O’Farrell, The Spectacular by Zoe Whittall and I just devoured HENCH by Natalie Zina Walschots. Vivek Shraya’s The Subtweet is one of the best audiobooks I’ve listened to, maybe ever.

I’m sure it comes as no surprise then that I was beyond excited when I found out that “Letters to Amelia” was going to be an audiobook. It increases accessibility of the book and will allow more people to read my story.

I was able to give my feedback on auditions, and it was surreal hearing my words in so many different voices. In the book, there are three distinct accents—the main character, Grace, is a thirtysomething-year-old from Toronto, and then there are the people she meets a Newfoundland, and of course, Amelia Earhart, who was originally from Kansas. Actors who do Newfoundland and Midwest and Toronto is a tall order, perfect but we found the most perfect voice for all of these characters in the extraordinary actor, Emily Nixon.

I heard the first pass of the audio files when I was up north, sitting next to a lake, and hearing my words in Emily’s voice gave me full body goosebumps. It’s a surreal experience to have the words you’ve said in your head a thousand times over in a different voice, a voice that is not yours, with a different cadence, with different inflections. It felt like what I imagine a playwright feels like, sitting at a table read, or in the first few rows of a theatre, seeing their imagined world come to life.

It’s out now, the audiobook of Letters to Amelia—just! It was released this week and I am so excited that Grace and Amelia are going to fill rooms and keep people company while they make banana bread and wash dishes.