It’s hard to believe we’ve come to the end of September and that the time I have been privileged to spend with you on this Open Book platform is almost over. Looking back at what I have shared with you over the past month, I see that again and again I return to the theme of the reader/writer relationship. As an author you’re always told to think of your reader. But the reverse situation also holds and becomes particularly apparent at this time of year in Ontario.

September and October are busy months for Canadian writers and readers. At the same time as the trees take on vibrant colours, the excitement of award and festival season arrives at our doorstep. There is something magical about festival season even under regular circumstances. But after the pandemic lockdowns, the uncertainty, the many cancellations, and the Zoomfinement we were all condemned to for so long, it is wonderful to return to in-person activities, experience the buzz of TIFF and TIFA —and so many other festivals around Ontario that invite us to take the car and explore our beautiful fall landscapes on the way to a great artistic reward!

When I first arrived here in 2003, I attended those festivals, eagerly scooping up the books that had made it to the long and shortlists, stocking my shelves as if it was already Christmas, and hoping to catch even a glimpse of those authors I admired. But I’ll also confess that since I first arrived here, I secretly dreamed of one day being more than a reader attending those festivals. I dreamed of being on one of those stages. I dreamed of seeing my own books showcased on the sales tables, side by side with those written by the exceptional authors I had read so eagerly.

That dream finally came to fruition fifteen years after I first came to live here and not long after I had taken the bull by the proverbial horns and started writing in English. Barry Callaghan took a chance on me and thanks to the amazing support I received from him, and from the entire team at Exile Editions, in 2018 I was invited to attend the Ottawa International Writers Festival and read from Plaza Requiem: Stories at the Edge of Ordinary Lives. Then, a year later, I was at Montreal’s Blue Metropolis Festival to launch an anthology I had helped edit, Historias de Montreal. (You are probably aware that Blue Met holds events for authors in English and French, but you might not know it also features works in Spanish and Portuguese as part of their Azul program, expertly curated by Dr. Ingrid Bejerman). Both those experiences on stage were fabulous and left me craving for more. And more has slowly, but surely (and thankfully!) arrived.

This year, as I promote my latest short-story collection, No Stars in the Sky, I have been thrilled to be interviewed alongside writers I never dared dreamed of meeting in person, let alone sharing the same stage. And as I fangirl around them, making sure they sign my copies of their books, I cannot help but feel deeply grateful for the opportunities I’m receiving, and also for how welcoming everyone has been. As someone who writes in her second language, I am always self-conscious about my accent. And as an immigrant woman who writes about the plight of women in (mostly) Latin American countries, I always wonder if readers will connect with my stories and characters, or if the hard realities that I tend to portray—in a conscious effort to denounce abuse and injustice—will alienate them. What a wonderful surprise it has been to meet readers who are genuinely interested in the worlds I have built with words. As I said above, writers are told to write with the reader in mind, but I have never managed to do that. I write what I need to write, what my body aches to write, and then simply hope and pray that someone will relate to it. 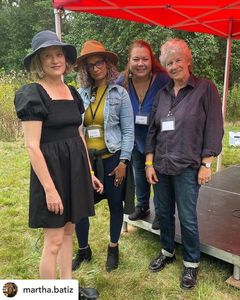 A couple of weeks ago, I attended the Eden Mills Literary Festival for the first time, and what an incredible experience that was! First of all, Eden Mills is a beautiful place. The houses, the river, the landscape are idyllic. And everything was perfectly organized: the shuttle buses taking writers and readers from the parking lot to the festival area, the booths and stages, the green room where we were offered a delicious lunch and refreshments. I had no idea what to expect and was delighted to see people bringing along their own chairs and blankets to make themselves comfortable on the large open spaces where we read and talked. Some people even brought their dogs! We were lucky because the weather was perfect for an outdoor event, and it was marvellous to see the huge crowd that was there to listen to all of us with incredible respect and attention, and to talk with some of those generous people afterwards. Writing is such a solitary activity that having this chance to connect is magical. Whether we face a large audience or a smaller one, whether we sign one book or scores of them, the truth is that without readers, without that audience, our voice would fall into the void. I hope every reader, and every attendee at this festival, and every other, knows how important they truly are. Being at Eden Mills was such an energizing experience that I want to go back next year as an audience member, with my chair and my pug, to spend a full day enjoying the fresh air and the readings and insights of the authors they invite next. Sheer bliss!

And now, as I write these lines, I am but a few days away from seeing another dream of mine come true: being invited as an author to TIFA. I have had the privilege of moderating panels for the Toronto International Festival of Authors before, but I will be interviewed myself for the very first time on October 2nd, sharing the stage American writer Jessamine Chan (who penned the amazing novel The School for Good Mothers). What a way to welcome Latin American Heritage Month, right? Seeing No Stars in the Sky on sale at Harbourfront Centre today gave me goosebumps. Thank you so much, TIFA and House of Anansi Press!

I am fully aware of how magical, and how ephemeral, this moment in my life is. Fortunately for me, it is my publisher’s job to worry about how many copies of my book are sold, if any. I’m not worried about that right now. All I’m doing is thanking my lucky stars (pun intended), and enjoying the ride. It is not every day that one’s dreams come true, after all.